I’VE GOT TO EARN MY TICKET 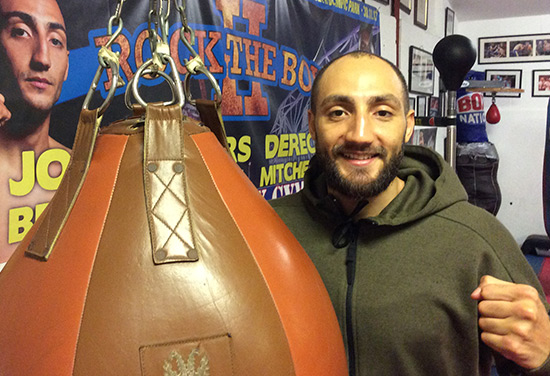 Bradley Skeete refutes the suggestion that it was his entertainment value that cost him a shot at Jeff Horn’s WBO world welterweight title in December and believes it was more his gift of the jab the Aussie camp elected to sidestep when a deal was on the brink of being signed and sealed. As he demonstrated against Shayne Singleton in June, the Penge puncher has got a bit of the devil about him, but accepts it is a characteristic he needs to take to the ring on a more regular basis…

I SHOWED IN my second defence of the British title that I do have it in me to go for the jugular in fights and maybe I just need my opponents to wind me up at the weigh-in to bring it out!

I have got it and maybe that is what people want to see because this is the entertainment business and I can’t just be this fancy boxer boxing on the back foot and winning on my jab.

I’ve got to show a bit of spite and aggression and I know full well I’ve got to start taking risks now.

With me, I had that world title contract with Jeff Horn and he obviously swerved the fight for a reason. He didn’t want to fight me and that is a fact.

I agreed to all the terms before they obviously did their research and looked elsewhere. To my mind they dodged a bullet.

He can say I’m boring and this and that, but they know I would have beaten him. That is a fact.

They didn’t look elsewhere because I am boring – I am ranked No.3 and ready. They chose to avoid me so I must be doing something right.

What I think I have to accept now is that I’m not going to be offered any shortcuts in this game and will have to earn my shot.

My style is going to cause anyone problems in the welterweight division. I am an awkward fighter and I do make good people look clumsy and average – that is what I do.

Then again, if I was to go in there crash, bang, wallop – with blood and tears – which is what some people want, I would probably get offered opportunities left, right and centre.

It is just not my style and how I go about things, but I do know that when the big fights come you have to be entertaining because that is when the money comes.

Fighting Horn would have been the golden ticket and my opinion of him hasn’t changed much. He is a good fighter, he is strong and game, but he is just a typical come forward, aggressive customer.

I don’t give him any credit for boxing ability. He is made for someone of my style and I would have busted him up – I probably could have shut my eyes and landed on him.

He is a world champion though, he beat a legend in Manny Pacquiao and now has defended his title against Gary Corcoran.

What it comes to earning a shot it is not going to get any easier when you consider the champions. Keith Thurman, Errol Spence and, in a few months, Terrence Crawford will be in possession of the belts.

They are elite level fighters and there is a difference between that and world level, which is where Horn is at. That is what I’ve got to deal with.

I believe I am a world class fighter and I just need to get the fights to prove it. There are fights out there for me and I need them because I am not saying I am at world level yet.

I would love the opportunity to step up for a world title this year after missing out on the Horn fight by the skin of my teeth.

It does prove I am there or thereabouts and I have the rankings – 3 with the WBO, 6 with the IBF. If the opportunity came up to get in with the likes of Thurman or Spence I would be a fool not to take it. Where else can I go?

Going up or down a weight is not really an option because there is no way I could drop pounds and going up would give my advantages away. I am not going to do that just so easier fights can be made.

All the time I can make the weight and make it comfortably, I will be staying at welterweight.