JACK BATESON: “ME AGAINST WARRINGTON ONE DAY? NEVER SAY NEVER!” 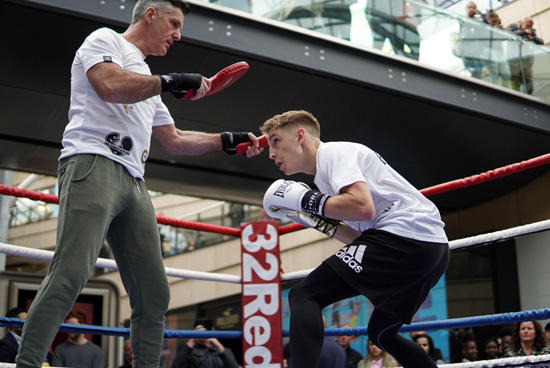 Rising super-bantam starlet Jack Bateson hopes to get a flavour of his future when he performs on the undercard of this weekend’s mammoth promotion at Leeds United’s Elland Road football stadium.

Like fellow Leeds lad Josh Warrington – who tops the bill in a salivating IBF featherweight title challenge to Barry’s Lee Selby – Bateson is a United diehard who eulogies about headlining on the hallowed turf himself in the not too distant future.

And with Warrington presently operating just four pounds north of Bateson’s super-bantam habitat, it’s not inconceivable that the city’s finest might one day square off against one another.

‘Me and Josh are good pals but we’ve not sparred yet. Fight each other one day? Never say never!’ says the 5ft 7in sharpshooter.

‘It’d be better if we could co-headline in world title fights but if I get up there quick enough and Josh stays at the top long enough ……!’

Talk of world title action might appear embryonic for a fighter with just five straight wins and 15 rounds on his pro slate but Bateson’s rich potential is incontestable.

Since he first dipped between the ropes as a 10 year old bag of bones, the lad raised in the city’s Moortown suburb has completed hat-trick wins in both the English schools and Junior ABA competitions, before adding a national CYP title and Commonwealth Youth gold medal.

As a senior, he added two English ABA titles whilst still in his teens and, in a distinguished period of national service, earned decoration in the form of a bronze award at the 2013 European Seniors meet in Belarus.

Little wonder that Hall of Fame promoter and serial creator of champions Frank Warren moved to add joltin’ Jack to his professional roster in September 2017.

‘To me, I made my pro debut long before I signed professional!’ says the 23 year old who is coached by his dad Mark and his uncle Martin (Mark’s twin).

‘I had three fights in the WSB. I beat an Algerian at the York Hall, got robbed away from home against a Mexican and lost a close one over in Italy.

‘I then won a tournament up at 56KG in Finland but, after missing out on selection for the Rio Olympic team, I just had no motivation to wait for another four years.’

After falling a tad short at 49KG, then 52KG in the last two Olympic cycles, Bateson has decided to operate in the 122lb division since acquiring his BBB of C licence. Having eased into the profession with a brace of early blow-outs against imported opposition, he has since showcased his considerable class in a trinity of four round shut-outs against sturdier men. The media reviews have been glowing.

‘I probably stayed too light, for too long in the amateurs. I like my food. Chinese is my favourite but there’s not much I don’t like. I was performing better at 56kg for my final amateur fights and I’m a big super-bantam now,’ says Bateson who has been sparring quality men Zelfa Barrett and Martin Ward to accelerate his advance to title contention.

On Saturday at an arena more accustomed for twinkling toes than bloody noses, he will hope to ignite the passions so readily bestowed upon the city’s underachieving ball players.

‘I’m a big ‘dirty’ Leeds fan and get to as many games as I can so I’m ticking a box here, fighting at the stadium so early in my career,’ says Bateson.

‘I’m very grateful to both Josh and Frank (Warren) for providing this opportunity. Hopefully, I’ll be on earlier so I can enjoy the main event. Selby’s a great champion but, as a Leeds lad, I have to back Josh. There’s not much he does wrong. It’ll be a great fight, either way.

‘We’re finally getting something going up here in Leeds. I sold 35 grand’s worth of tickets for the shows at the First Direct Arena and I’ll do over 60 grand for Saturday. Not bad for so early in my career. It helps that Dad puts on his own shows in Leeds so everybody knows him. We’ve got the City behind us now so why would we ever need to travel?

Saturday’s opponent Jose Hernandez, a hardened 27 fight Nicaraguan, has been stopped just once in five prior gigs on these shores, against high-flying prospects with combined stats of 51-5-1. Bateson knows he must sparkle if he is to court attention.

‘First and foremost, I need to win but a stoppage or kayo would be the icing,’ he finishes.

‘As fans are leaving the stadium, I’d like my name to be stuck in their head. I want to wake up on Sunday morning with loads of positive messages on social media, fans telling me that they’re looking forward to seeing me again.’