JACK BATESON: “PEOPLE WILL REMEMBER ME AFTER I’VE BEEN AND GONE!” 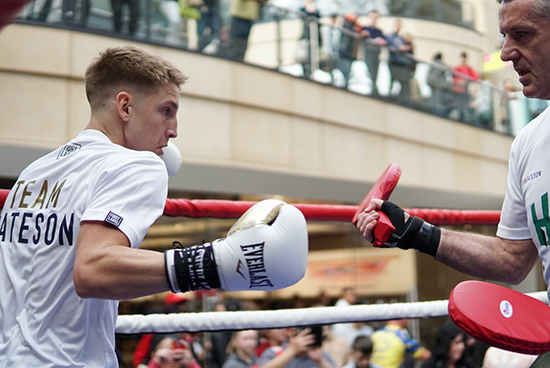 If Josh Warrington and Nicola Adams presently sparkle as the jewels of the welcome Leeds boxing renaissance, Horsforth super-bantam starlet Jack Bateson is a strong tip to emerge as the city’s future diamond.

The 23 year old, who makes a sixth paid start on Saturday’s stadium bonanza at the city’s Elland Road football ground, has long been vaunted as one of the nation’s premier young fighting talents.

Son of local boxing promoter Mark Bateson, this classical stylist amassed seven national junior titles, a Commonwealth Youth gold medal plus a brace of Senior ABA titles and a European Seniors bronze gong, before his teenage years were through.

‘Thus far my pro career has gone great; five fights in eight months. I stopped a couple of imports and, in the last three, I’ve been able to try new stuff out against tough lads who were much better quality,’ says

Jack the Lad, who represented England in European and World Championships at both junior and senior level. Despite his youth, the talented Tyke is already something of a master of his craft, having triumphed in over 100 of 120 scraps in a singlet.

‘I only started boxing when I were about nine because me older brother Tom packed up and I felt a bit sorry for me dad who coached him,’ disclosed Bateman who is now trained by Dad’s twin brother Martin.

‘Before I knew it, I were unbeaten in 12 and boxing for England against Ireland. I lost by a point and cried my eyes out. I never wanted to experience that pain again.

‘I’d just started a Sports degree at Bradford University when I was called up to the Team GB set-up in Sheffield. I was at GB Monday to Thursday for five years and I made some really good pals. Living in our house was Joe Cordina, Frazer Clarke, Galal Yafai, and Qais Ashfaq. I had a really good time.

‘There was always a conveyor belt of talent to talk to and study. I became very good friends with Anthony Fowler. Anthony Joshua, a really humble guy, was also there with me. Daniel Dubois and me won gold medals together at the Tammer tournament in Finland.  I attended hard training camps all around the world, Kazakhstan, Uzbekistan, Russia … I had experiences that you can’t buy.’

One of the few experiences Bateson didn’t get to savour, alas, was participation in the Olympic Games and it still rankles with this most polite and placid of young men.

‘I just missed out on the 2012 London at 49KG when I was only just turned 18 but I didn’t feel I got a fair opportunity for Rio (2016) when I moved up to 52KG. I was injured, Muhammad Ali got in front of me and took my place. To rub salt into the wounds, it turns out he was on steroids!

‘Ali tested positive for Trenbolone (an anabolic steroid which aids muscle growth) at a recent WSB event in Morocco and, to me, he got off lucky with a two-year ban. We sparred thousands of rounds at GB and he was always massive for the weight. I’m a bit bitter that we didn’t have a box off before he was selected for the Olympic qualifiers as I’d previously beaten him in two of our three bouts. We were due to box again at the GB Championships but he conveniently pulled out with a ‘cut’.

Still, I’m very thankful for all the opportunities I had.  The big amateur tournaments put you into ‘uncomfortable zones’. Day after day, you’d be facing fellow national champions without knowing who you’d be drawn against. You’d have to be capable of adapting to so many different styles, very quickly.’

The skilled and speedy slickster is now devoting his considerable ability and energy to the professional sphere where he hopes to acquire the major international trinkets that eluded him as an amateur.

‘I’ve always been extremely dedicated,’ says Bateson who confronts one Jose Hernandez, a third successive Spanish based Nicaraguan, over four rounds this weekend.

‘Though I’m right-handed, I’m a natural switcher, as good southpaw as I am orthodox. Some of my natural attributes and qualities were taken away by the GB coaches but I’m back with my Dad and uncle and they’ve been restored. Now I’m a different animal!

‘All I see ahead is world titles, topping bills at Elland Road, doing my city proud. People will remember me after I’ve been and gone.’