JACK FLATLEY: “I’VE ONLY SEEN A TAPE OF ONE OF HIS FIGHTS AND HE GETS KNOCKED OUT!”

Former ABA finalist Jack Flatley is itching to resume business at The Macron Stadium in his home town of Bolton on Friday, writes Glynn Evans. 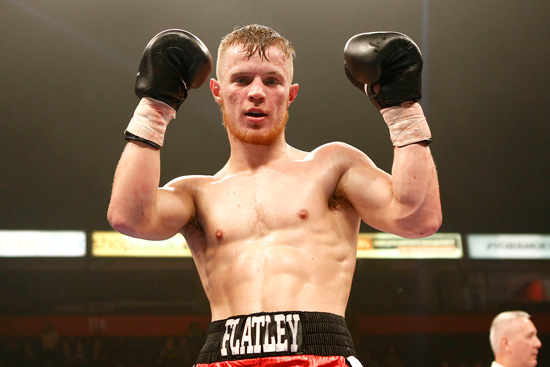 The last time the unbeaten middleweight donned the gloves at the venue, he scalped world ranked heavyweight contender Hughie Fury!

The north-west rivals collided four times as teenage amateurs and 21 year old Flatley prevailed in three of them.

‘I really hope that Hughie goes on to become heavyweight champion of the world. It’ll be nice to tell the grand children I beat ‘The Man’ ….three times!’ quips the articulate Lancastrian who would now spot ‘Fists of Fury’ six inches and five stone!

‘All four were action packed fights. Hughie was much taller even then but still came forward. One time we were actually fighting out of the same gym which was weird. We often cross paths at shows and still always speak.

‘And I don’t see any reason why he can’t develop into a world heavyweight champion, like his cousin (Tyson).  I’ve shared a camp with him recently over in Belgium and he has a good team around him. Those Fury’s train HARD.’

‘I take off one week maximum after a fight then I’m back in the gym learning, looking to increase the variety of my moves, feints, punches and defence,’ states joltin’ Jack, a final year sociology student at the University of Manchester.

‘I’ve had some great sparring with the likes of Jack Arnfield and Martin Murray plus my stable mate Luke Blackledge (the reigning Commonwealth super-middle champ). They’re quality bigger guys but I usually do alright so I’ve no cause to fear anyone my own size and level.

‘I’ve also worked with (WBO lightweight boss) Terry Flanagan who’s very good on his feet, a lot quicker and more advanced than me. They’re all kind enough to give me pointers. It’s great experience and provides an indication of where I’m at and what I need to do to join them at the top.’

‘It’s a top venue and I’ll know most of the people there. I’ve personally shifted about 120 tickets,’ claims the six footer who squares off with 30 year old Bulgarian veteran Valentin Stoychev in a scheduled four rounder.

‘I’ve only seen a tape of one of his fights and he gets knocked out!

‘He’s more experienced than me but I’ve got the skill set to adapt quickly to any style I face. I know what I’m capable of. I enjoy fighting the local lads but he’s my first foreign opponent so that’s another box ticked. I know very little about him so it’ll be like being back in the amateurs; just turn up and fight!’

Yet to concede a round as a pro, Bolton’s blond bomber intends to showcase his more volatile qualities come Friday.

‘A win is obviously paramount but, personally, I’d love a knockout or stoppage this time cos I’ve not had one yet as a pro,’ he concludes.

‘Alex (Matvienko, his coach) says it’s not important but it attracts the public, gets a buzz going.’