JACK ‘ONE SMACK’ MASSEY: “IF I CATCH THEM CLEAN, THEY GO OVER!” 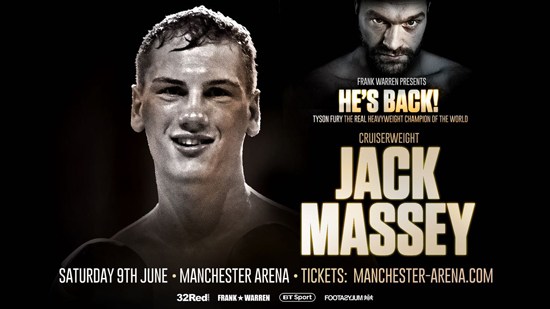 Though he has halted just six of his 13 paid victims thus far, the 25 year old former ABA cruiserweight king has latterly developed the patience to compliment his potent punching and the consequences have been catastrophic for his recent competition.

Two of his last four victims – both good men with records heavily in the black – failed to make their way through the opening session.

‘I actually like to take my time and ease into a fight but if I catch ‘em. I’m on ‘em,’ says the 6ft 4in MTK managed, Robert Rimmer Jr coached prospect who resurfaces after eight months inactivity against ex Irish and Celtic champion Ian Tims in a scheduled eight rounder in the prelude to Tyson Fury’s ring return at Manchester Arena on Saturday.

‘One of my fans called out ‘One Smack Jack’ during my pro debut and it just caught on. Other boxers assure me I punch very hard with BOTH hands. My stoppage wins have been proper knockouts. If I catch them clean, they go over.

‘I’ve knocked most of my opponents down but, early on in my career, I’d jump straight on ‘em and I’d rush in to finish them and get wild. When you chase the knockouts, they don’t happen. Also, it was hard to finish journeymen who hid under their shell but, in longer fights against better quality opposition, you’ll see more spectacular knockouts from me.’

In contrast to most who share his profession, the cruiser cruncher’s destructive instincts were not a product of the frustrations of the inner city. He was born and raised in the sleepy market town of Chapel-en-le -Frith deep into the rolling Peak District hills. However, there is boxing in his breeding.

‘Grandad boxed in the army and Dad had a handful of amateur fights. He was a big boxing fan with loads of video tapes that I loved watching. Like most kids, Mike Tyson was my favourite. ‘Baddest Man on the Planet!’ disclosed mallet-fisted Massey.

‘My older brother Daniel won a few national (junior) titles and I just followed to the Buxton ABC gym when I was 12.

‘I had 54 amateur bouts and my losses were in single figures. I won two junior ABA titles, three national CYPs, a Tri Nations gold medal plus a bronze in the Commonwealth Youth Games representing England over in the Isle of Man.

‘In 2013, a week after my 20thbirthday, I beat Chris Billam-Smith to win the senior ABA title. I also outpointed (Olympic light-heavy bronze medallist)Joshua Buatsi, in one of our two amateur fights.

‘But I became bored with the amateur scene after struggling to get selected for the GB set-up. I finished my amateur career at the Northside gym in Manchester, training alongside (ex-British and two-weight Commonwealth pro champion)Craig Watson and, watching him, decided that professional boxing was what I wanted to do.’

Despite his obvious pedigree, the part-time stonemason has been restricted to just 13 starts since shedding his singlet in July 2013.

‘I’ve had a lot of bad luck…especially a bad injury to my nose. But now that I’ve done deals with MTK and Frank Warren I expect the big fights to start rolling in,’ claims Jack.

‘It shouldn’t be long before I’m challenging for major titles. I believe I’m already one of the best in the cruiserweight division.

‘OK, Okolie v Chamberlain at the O2 recently wasn’t a great fight but it brought a lot of interest to our division. There’s loads of good fights to be made. Like the heavyweights, us cruisers are big explosive guys who bring a lot of kayos.

‘All I need is a bit more experience before I can think of challenging the winner of Watkins-Okolie for the Commonwealth or (current British champ) Matty Askin. The titles are there for the taking.’

And ‘One Smack Jack’ will be looking to execute another Massey-cre against 38 year old Dubliner Tims in their appetiser to Fury’s comeback, screened by BT this weekend.

‘I intend watching Tyson’s return with another explosive win under my belt,’ states Massey a prolific ticket seller who regularly shifts over 800 tickets when he headlines in nearby Buxton.

‘I’m hoping to bring at least 200 to Manchester and I hope my fans get to see a good fight because I’m getting complaints when they pay good money and it ends in less than a round. But I expect a win by late stoppage.

‘Ian’s clearly a tough guy, quite tight (defensively)but he’s getting on a bit and a good bit shorter than me. Style wise, he should suit perfectly. I’ll be looking to keep him on the end of my long arms and gradually take him apart.

‘I think I’m going to go far, win British and world titles. I’m going to be in plenty of good fights and deliver plenty of big knockouts. I’ve a great jab, can box, punch, I’m exciting. What more do you need?!’

Tickets for He’s Back are available purchase NOW via the Manchester Arena on www.manchester-arena.com and tel: 0844 847 8000.