JACKAL BACK ON THE PROWL 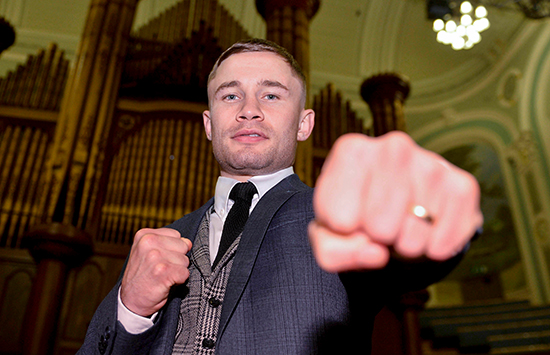 The second coming of The Jackal hits the SSE Arena in Belfast on Saturday night and the man himself, two-weight world champion Carl Frampton, gives us the lowdown on his new beginning – which starts against the Mexican Horacio Garcia – in the first of his exclusive Fighter Diaries

TO BE QUITE honest with you all, with all the changes that have gone on, you could easily believe it might have been a difficult time for me bedding down and adapting to my new circumstances.

Yes I’ve got a complete new team, but I also have new friends as well, and we have a good craic around the gym.

I firmly believe that Frank, MTK and BT Sport as well are going to help in taking me to another level. I’ve already been to the top, but it hasn’t been a great year and I think we can outperform what I have done before, everything I have done previously.

The name of the show, ‘Frampton Reborn’, is so appropriate for this because that is what it feels like. I almost feel like a novice professional just turning over!

It is a completely new start. When people make decisions regarding trainers, promoters and the rest it is normally one at a time. I’ve done everything at once!

I’ve got a new trainer, a new promoter, MTK are advising me as well and helping me in making the right decisions.

So it does feel like a new start and the title of the show fits well.

It was put to me after I made the switch to Jamie Moore in Manchester that I could have recruited a trainer to work with me close to home in Belfast.

I could have done that but it never really crossed my mind. For me personally, I think I need to be away from home, especially when I am training. I get home at the weekends and that is my time off, other than one session on a Saturday and normally a run.

The hard work is done Monday to Friday in Manchester with Jamie and that is the way I like to do it. I think I need to be away when I am training hard, no distractions at all and I need to get my head down.

I also need to make sure I am getting enough rest away from the gym, to make sure that people aren’t annoying me.

People can find you a lot easier in Belfast and I am the type of person who finds it very difficult to say no, even when I probably know I should be saying no half the time.

I always like to and try to help people out.

When I take myself out of that situation I can completely focus on training. It is a bit of a selfish attitude to have, but I think that is what you need in this game.

During training I always remain dedicated and disciplined even during my weekends at home and don’t return with any excess baggage.

I am disciplined – even though I am saying this now after missing the weight for my last fight, which was me being unprofessional – and when I want to be I can be the most disciplined eater you will ever come across.

I know I will get a wee bit of stick about saying this and it looks like I am contradicting myself, but I am very, very dedicated in everything I do.

Everything around my last fight – that never happened – was a catalogue of mishaps but the whole year was a disaster. It started off badly with my first defeat and it took me a while to get over that, to be honest.

All I wanted to do was fight, get a win and forget about the loss to Leo Santa Cruz. Then I missed the weight, for one thing, which was completely unprofessional from myself and then, to go from bad to worse, Gutierrez falls in the shower and cuts his chin and nose.

It was a disaster and people looking in from the outside must have thought it was a circus, but that was nobody’s fault, you couldn’t predict anything like that, the kid just fell.

Things happen for a reason and I get the chance now to put things right and finish off the year on a high.