JACKSON ACCUSES FRAMPTON OF BEING TOO HEAVY 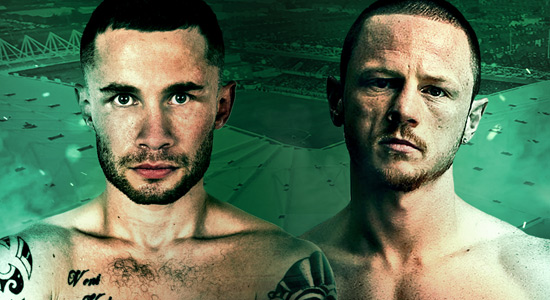 LUKE JACKSON has accused Carl Frampton of being overweight ahead of their big Belfast showdown.

The Australian star said: “I’ve seen some footage of Carl’s training. He still looks sluggish and bit heavy. It seems he is always on a plane going to places.

“They’re overlooking me, I’m just Luke Jackson from Australia who they are supposed to bowl over.

“I’m here in Sydney working my arse off. I can cause an upset and that is what I plan on doing.”

Jackson, 33, has coming to the end of a six week training camp in Sydney and shortly heads to Dubai with trainer Billy Hussein before fight week in Frampton’s back yard.

It’s the longest camp ever for the 2012 London Olympian, who says: “I am having a full eight weeks with Billy and had two weeks of conditioning in Tasmania before coming up to Sydney.

“I have been doing 12 round sparring sessions and sometimes we have had to cut to ten because they couldn’t stay with me.

“I always train hard, but when you are fighting a guy of Carl’s stature I have to be better in every area.

“I am pushing hard in the gym and I think it’s gonna show. It’s showing in my training and Billy is very happy with me.

“I never asked for the fight with Carl. They asked for me, I was waiting Oscar Valdez but this fight presented itself and I grabbed it because I think I can win.”