JAMES READY TO BRANCH OUT 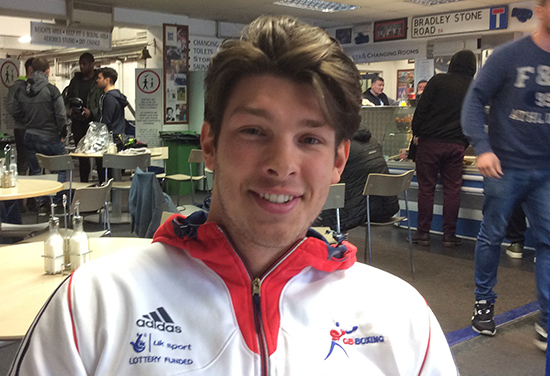 One of Frank Warren’s most recent recruits, the outstanding amateur James Branch, is currently fending off suggestions that his professional career should be launched at light heavyweight. For the hefty product of Repton BC it is not an option he is overly keen on ahead of a mooted debut on April 14.

In his first exclusive Fighter Diary, Jamie explains his weighty issue, before talking us through his amateur exploits and the family history that has led him to where he is today…

A LOT OF people talk to me about coming down to light heavy but they don’t realise that I am quite thick set and I don’t think it is going to happen! We’ll have a look at it though.

I have won titles in the amateurs at light heavy, but all the main ones I won were at cruiserweight so, for me, sticking there is the most likely option.

I had a successful stint in the amateurs where I only had three defeats in 50 fights, which is a good pedigree and I obviously had my dad – also James – behind me who enjoyed a massive amateur career, but unfortunately it didn’t work out for him as a professional.

I will always stick to the same system I’m working to now because I know I can beat people with the way I box. I go in there and make them miss because if they can’t hit you they can’t beat you.

I will stick to that all the way through professional boxing and I am so confident I can go all the way.

In the amateurs I remember I was only 17 in the ABAs and I was about 78kg then. All the boys were laughing at me wanting to draw me and I thought ‘we’ll see’ because it is not a strength contest.

Yes it does come into play, but if you are a good boxer you can nullify everything else. That is what I do.

My style is very elusive and I am very awkward to fight – everyone I have been in the ring with always says that.

The three defeats I suffered were to Laurence Okolie, Warren Baister and one near the beginning many years ago. I beat Laurence the first time we boxed, while he got the decision in the second, but it was close.

Now with us both in the professionals it could be a big, big showdown one day I think.

Like Laurence, I was on Team GB for about a year before I left because I didn’t like the Sheffield set-up, although I appreciate everything they done for me.

They did their best with me but I just didn’t click with them up there because of my style. In Sheffield it is more of a one-size-fits-all approach with hands tucked in, whereas I’m more of a free-flowing counter-attacking southpaw with my hands held a bit lower.

With how I box there are no instructions when you go out there because even I don’t know what is coming next myself! Everything is off the cuff and up in Sheffield I couldn’t really produce what they were looking for. Taking shots on the arms is not really my thing.

I got on the team in 2015 so, in theory, it was perfect timing for the Rio Olympics. Myself and Laurence got on at the same time and we were both about to go to a few tournaments before unfortunately I got injured.

That was it and I was out. I pulled a muscle in my back and, with keeping on training, I made it worse and worse. The next thing I knew I couldn’t train at all.

With not being able to go to the tournaments there was no chance of going to the Olympics. That was it for me after that because I was only up there because I wanted to go to Rio and it was the only thing left for me in the amateurs.

After coming back, myself and my dad – along with the coaches at the Repton – spent a long time making my back as strong as possible so the problem would never come back again.

The plan was to do that, win the senior ABAs – which I did – as a warm-up, before turning pro.

So my last fight was in July and the time after that was used going around different pro gyms sparring with different people. We came to the Peacock last and this is where I really found a home.

The connection is there because my dad was trained by Martin and was with Frank (Warren) as well. There are not many gyms that give you the same homely feel as the Repton does where you are like a family, but this is one of them and I feel so at home here.

They have put me in with Frank with the history there and how we are looking at it is that it is like unfinished business for the Branch family.

My dad turned professional with a lot of expectation after him doing so much in the amateurs. Unfortunately it didn’t turn out for him.

Now I’m with the same trainer, the same promoter and I am going to finish it. I’m going to go all the way and do it all myself.