Belfast battler Jamie Conlan is a little man with a big plan.

The spiteful super-flyweight is intent on hoovering up the British and Commonwealth 115lb belts before the year is through and if that sees him cross paths with ex IBF bantam boss Paul Butler, so much the better.

Older brother of Olympic flyweight medallist Michael Conlan, the 28 year old aircraft fitter gets to showcase his wares live on BoxNation this Saturday when he headlines at Dublin’s National Stadium with a maiden defence of his WBO Inter-Continental title against Mexico’s very able Junior Granados. 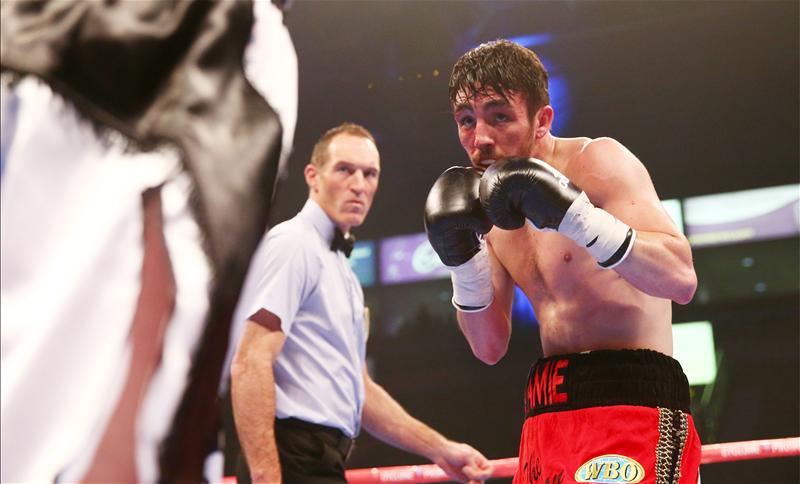 The Channel Of Champions, BoxNation, will televise the show live and exclusive on Sky 437/HD 490, Virgin 546 and Talk Talk 415.  Subscribe at BoxNation Or watch online at Livesport.tv and via iPhone, iPad or Android.

Boxing writer Glynn Evans caught up with him earlier this week.

You joined the profession five and a half years ago. Though you’re still unbeaten, did you expect to be a bit further ahead in your career by now, given your stellar amateur pedigree?

It’s been frustrating at times. There have been a few periods of inactivity when boxing went a bit stale in Ireland and I was forced to go back to work as a tiler and ground paver. I actually enjoy that kind of work.

But now everything appears to be moving in the right direction. Hopefully I can fit in three fights between now and Christmas and finally start to hunt down the top boys.

Is winning the British title important to you?

Things have changed in recent years but as a wee boy watching boxing on Saturday nights, you didn’t get many British or Irish boys fighting for world titles. Back then, British and Commonwealth titles were the big thing and every young boxer aspired to winning that beautiful Lonsdale Belt. It really captured the imagination.

It sort of represents the first rung on the ladder and, of course, I’d jump at an opportunity to fight for that…..especially if Paul Butler was still the champion!

The Commonwealth title is the same. I don’t know too much about the champion Anthony Nelson other than he comes from the north-east of England but I’d jump at the fight. I’m belt hungry!’

With opportunities restricted and still no European title at 115lbs, have you ever contemplated moving up or down in weight?

I definitely couldn’t do fly because I’m very big for a super-fly. I dare say that at some stage of my career I’ll do bantam but it’s certainly not a necessity at the moment. I don’t struggle for weight and I want to do as much as I possibly can at 115lbs before moving on.

You recently joined the MGM Gym in Marbella. Why?

So that, with a suntan, I finally look like a proper Mexican!

Previously, I’ve always trained for fights from my house in west Belfast and there’s far too many ‘everyday life’ distractions going on around you.

So this has been brilliant. This has been my first full scale training camp. I’ve been away for nine weeks and I can feel the improvement daily.

It’s not been without its difficulties. I’m very much a home bird. The missus comes over the odd weekend but missing everybody provides a reality check, reminds me what I’m doing all the grafting for.

And the physical and mental benefits have been enormous.  I just can’t wait to show how I’ve been developing on Saturday. Fans will see a completely different fighter.

After five years being coached by John Breen and Eamonn Magee in Belfast, you’ve recently switched to Danny Vaughan in Spain. What are you hoping he can add?

First I must stress that John and Eamonn are brilliant men and the parting was amicable. John’s been as much a mentor as a trainer to me. But when the Marbella opportunity arose, I had to grab it with both hands.

Within a week I knew that Danny and I were made for each other. We clicked straight away. Initially, I studied how he worked with Derry Mathews. I knew we’d be a good fit.

Danny’s made me a more measured fighter. He’s got me thinking a lot more, boxing behind the jab and developing new combinations. He studies my opponents meticulously. Expect a very calculated performance on Saturday.

Definitely excited. It’ll be a 2,100 sell out on Saturday.

As an amateur, the National Stadium became my home from home. The All-Ireland finals were held there every year right through the age groups and, as kids, those were our world title fights, a huge thing. As I got older many of my international fights took place at The Stadium. I’ve already won a lot of medals and titles in that ring.

My dad’s from Dublin anyway and I spent many summers with my grandma in the city. There’s always plenty from Dublin who travel to support me when I fight in the north and there’ll be a good few buses coming down from west Belfast. The Irish love a drink, and love a fight. It’s gonna get very noisy.

Your known as ‘The Mexican’ and list your ring heroes as Alexis Arguello and Erik Morales. What is it about Latin fighters that you admire?

The great Latin champions possessed all the skills to make fights easy but possess this machismo, this craving to excite their crowd. They always seem to be fighting for the love of their people rather than titles or money….and they all seem such decent, humble guys outside the ring.

Given you’ve been out of the ring for 10 months, what will represent a productive night’s work for Jamie Conlan on Saturday evening?

From what I’ve seen, Granados is an aggressive fighter, a decent, neat operator.  I believe the majority of his fights came at flyweight so I should have size advantage.

Stylewise, he’s short and comes in low behind a tight guard. He possesses a good left hook to the body so I’ll need to be mindful but when he unloads, he looks wide open.

There’ll be times I’ll box and times I’ll trade. It should be exciting and I believe I can not only win but look good doing it.

Classy Conteh and Fearless Freddie must be Anthony’s yardstick