Belfast thrillmeister Jamie Conlan has been added to the mouth-watering Cardiff Ice Arena show on July 16th. The 29 year-old super-flyweight supremo will box over eight rounds against an opponent to be confirmed, live and exclusive on BoxNation. 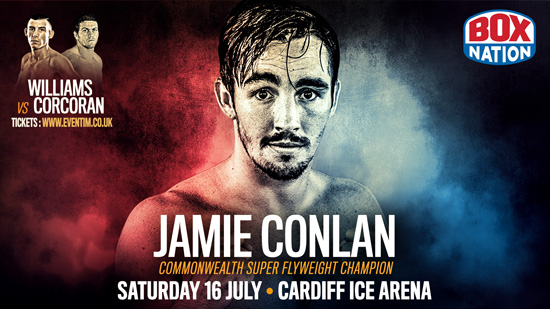 Conlan (16-0 – 10 KOs), has a well-deserved reputation as a rising star in the super-flyweight division, due to his undefeated record and strong KO ratio. He has an eye-catching and offensive boxing style, which has spawned his nickname, ‘The Mexican”.

Irish hero Conlan signed a promotional agreement with Frank Warren in March and is looking to move his career onto the next level as he hunts down a world title. The Irishman is in a ultra-competitive division that contains British rival Paul Butler, plus the classy, big-hitting, WBO World Champion from Japan Nagoya Inoue.

Last time out all-action Conlan beat South Sheild’s Anthony Nelson to claim the Commonwealth Super-Flyweight crown in an early fight of the year contender. Braveheart Conlan looked in trouble in round seven but survived to land the decisive blow in heroic fashion.

“I’m buzzing to be added to the talent-stacked Cardiff Ice Arena show and can’t wait to get back out there. I’ve never boxed in Wales even as an amateur so its another box ticked off. I’ll be looking to correct the mistakes from the Nelson fight and rack up another win in style.”

“I believe Frank Warren is the best promoter out there and will get me where I want to be and that’s a world champion. I’m pushing onto world level now and Frank’s expertise is second to none so I know that I’m in great hands. I’m getting out regularly and that’s the best way to progress as a fighter.”

BoxNation, the Channel of Champions, will televise the show live and exclusive on Sky 437/HD 490, Virgin 546, TalkTalk 415, Freeview 255 and also on smart connected devices via multiple platforms. Go to www.boxnation.comto see how you can watch this fight and more live!