JAZZA DICKENS: “AS I TEENAGER, I BEAT RIGONDEAUX MANY TIMES ON ‘FIGHT NIGHT’ AND IT’LL BE THE SAME OUTCOME ON MARCH 12th!” 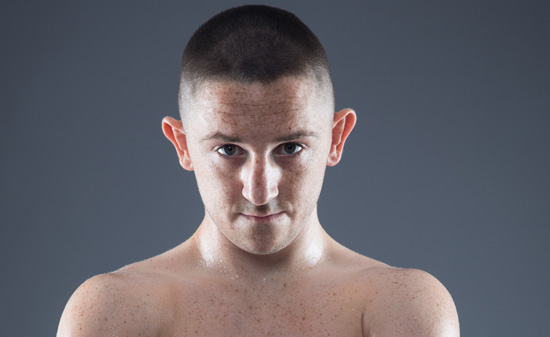 The 24 year old Merseysider intends to execute one of the biggest upsets in the history of British boxing when he squares off with the unbeaten former two time Olympic champion over ten rounds at The Echo Arena in his home city of Liverpool and he insists it won’t be the first time he’s conquered the Cuban.

‘As a young teenager, I played against ‘Rigo’ regularly on ‘Fight Night’ and I always beat him then,’ recalls the super skilled Scouse southpaw who has won 21 of his 22 pro fights.

‘I developed me own ‘Jazza’ character with the sticky out ears and never, never gave in till I’d won. Expect the same on March 12th!’

‘I first became aware of Rigondeaux when I was about 13. He was the one the amateur coaches at the ‘Solly’ (Salisbury ABC) always forced us to study when he was in the Olympics. All us young scallies were really envious of his talent but I kinda knew that one day we’d fight.

‘So when the offer came four or five weeks ago I snatched at the chance. I’m the reigning British champion so it was ‘on’. I’ve huge dreams and ambitions in boxing and this was affirmation that I’m moving in the right direction to fulfilling them.

‘Look, I fully appreciate how good ‘Rigo’ is but I’ve got an ego too. As a kid, I was winning everything myself, six national junior titles plus a European schools medal. Now, at 24, I’ve won and defended the British professional championship. For me, it was just destiny.’

Though ex WBA Super and WBO king ‘Rigo’ has already been dumped four times in his unblemished 16 fight pro career, Everton fan ‘Jazza’ still finds himself entering as a 16-1 outsider with the oddsmakers. It simply fuels his fire.

‘All the people who say or tweet that I’ve no chance just drive me on,’ he claims.

‘But they’re only giving their opinion. Boxing needs fans in order that these great fights can be made so I never take offence.

‘I’ve not met ‘Rigo’ yet. Initially he was complementary on social media about me having the courage to accept the fight but lately he just talks about Frampton and Quigg all the time. He should be focussing on Dickens. If he approaches me lightly, I guarantee he’ll pay.’

A devout Catholic and rapacious Bible reader, his spirituality provides Dickens with great expectations of delivering what many perceive would be a miracle.

‘My faith is my life, far bigger than my boxing. Boxing’s just a sport that provides me with some purpose,’ he contends.

‘I’m eternally grateful for all the good people that God has given me in my life, particularly me beautiful girl (fiancée Katie) and beautiful kids. I’m a simple, humble fella. They say the more links you add to a chain, the weaker you become. I’m very happy with my lot.

‘I read my Bible daily and stories such as David and Goliath, 2 Samuel 1:17-27, provide me with great inspiration and self-belief. The little guy overcoming all obstacles. Too many don’t believe it until they see it. As a Christian I believe before I see. Jazza’s Testement 1:17!

‘Religion helps get me in the right frame of mind to fight. In boxing, confidence and belief are everything. It’s far better to be mentally fit than physically fit.

‘My faith provides unbelievable support, rides me through when I wake up tired, inspires me to try to raise the bar every day in training. I strongly believe that if you’re persistent in life, good things will happen for you.

‘Hopefully, I can prove a help and inspiration to the youth of Liverpool who come from a similar hard background to what I did. If ‘Jazza’ from the Vauxhall Road can achieve then maybe so can they. That drives me.’

Preparation at the Everton Red Triangle base on Albion Road L5 couldn’t have gone more perfectly and Dickens declares he’s primly conditioned physically, mentally and spiritually to deliver the type of performance which he knows could alter the course of his life.

‘I don’t think beating ‘Rigo’ would change me as a person – I certainly hope it won’t – but it’d definitely enhance me boxing career, put me up alongside your Carl Framptons and Scott Quiggs,’ he states.

‘I’ll be nervous of course but the nerves come every fight and you just have to learn to handle them to your best advantage. If you don’t nail your chances in life, they just pass on to someone else.

‘I guarantee that I’ll enter this fight with exactly the same mentality that I’ve entered every other one, since right back to when I was in the schoolboy championships as a teenager. I’ve no cause to idolise Rigondeaux. We’ve both got two hands and a pair of legs.’

And while the British fight cognoscenti prepare to eulogise over the great ‘Rigo’s’ UK debut, jabbering Jazza is quietly confident that he possesses the necessary hardware to catch the Cuban master off guard.

‘People need to realise that I’ve got a pretty unique style; extremely awkward to master and I’ll be arriving into the ring at The Echo Arena with massive self-belief and faith,’ he concludes.

‘It’s a massive thing for all the fans who’ve supported me up and down the country that I get this great opportunity in Liverpool so they can all witness it but, as far as the fight goes, it’d be no different if we fought in a shed in Cuba! The result will be exactly the same as when we ‘fought’ on ‘Fight Night’!’