JAZZA DICKENS: “GOD HAS PLANNED GREATNESS FOR ME!” 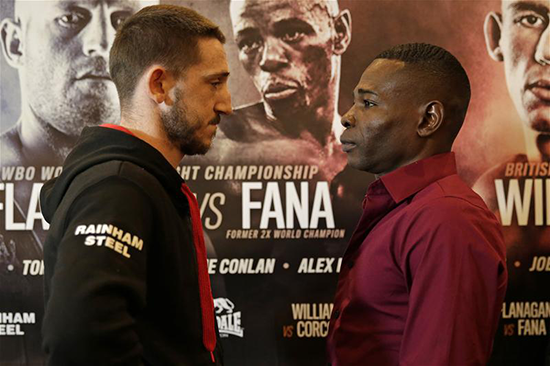 And the Born-Again believer is adamant that it’s his faith, as much as his fizzing fists and fancy footwork that’ll steer him to the mother of all upsets at Cardiff Ice Arena, writes Glynn Evans.

‘My religion is everything and I guarantee that I’ll enter this fight a lot more confident than Rigondeaux,’ insists the 25 year old Scouse southpaw who holds the British title at 122lbs.

‘He won’t enter with the mental strength and faith that I possess and that confidence and belief has been festering for years, not just when I started preparing for this one fight.’

The staunch Catholic’s spirituality was surely strained in March when double Olympic gold medallist ‘Rigo’ stood him up at the altar shortly before his breakout non-title 10 rounder at The Echo Arena in his home city, after encountering visa problems.

‘I only found out two days before but still had to fight so needed to stay focussed and go with it. I’m very grateful that, at such short notice, they got me a substitute in,’ says Dickens who exacted retribution on one Reynaldo Cajina, forcing the Spanish based Nicaraguan to bail out after six of a scheduled eight rounder.

‘It was after my fight that I really felt gutted. But when I then had to withdraw from the European title fight that was arranged for me in June, due to a neck injury, I knew it was God’s will. I always believed I’d get to my destiny and it’s only been a few months more.

‘Now my dream fight is back on has been upgraded to a world title.  Also my coaches have had longer to study ‘Rigo’ to sort out a plan plus we’ve been able to get better southpaw sparring in. The Lord works in mysterious ways!

‘I’m very confident it’ll happen this time. There’s a lot at stake here for Rigondeaux too.’

In preparation for the 48 minutes or less that could define his future life, the former multiple national junior champion has been beasting himself into pristine fighting fettle at the Everton Red Triangle gym on Albion St, Liverpool 5, where he is tutored by brothers Paul and Mick Stevenson.

‘It’s on my door step and I’m nice and comfy with my family around me,’ explains joltin’ Jazza, who has triumphed in all but one of his 23 paid scraps but still enters as a 12-1 outsider.

‘I can honestly say I’m preparing for Rigondeaux exactly the same way that I’ve trained for all my other fights. I’ll focus on doing what I’m good at, what works best for me. Mick and Paul will devise a boss plan and we’ll fight to my strengths.’

While the loose and elusive Dickens has had to forfeit fighting in his home city for the rescheduled gig, he can expect to profit from partisan support from the Principality’s buoyant sports fans who are presently still bubbling from Welsh soccer success at the Euros.

‘Going to Cardiff will be no different to going to Las Vegas or Madison Square Garden to challenge for a world title. It’ll suit me a lot more than it’ll suit him,’ he quips.

Far from daunted, the Mersey magician is positively frothing at the opportunity to pitch his skills and smarts against the 35 year-old pound-for-pound contender who’s won 16 straight, including seven world title spats.

‘No one can dispute I’m the best if I beat ‘Rigo’.  There’s a massive gap separating him from all the other champions at 122lbs. This fight will provide an indication as to where I am on the world stage,’ says jabbering Jazza.

‘Rigo’ had a great style for the amateurs and was one of the best ever. As a pro, he might be boring to the average Joe but if you really know your boxing, you have to appreciate his skills and patience. It’s his self-belief and hunger rather than physical attributes that make him so special.

‘But the fight will go how I dictate. I really believe in myself. I believe that God has greatness planned for me.

‘I know it’s going to be the most enjoyable fight of my life and I’m just really, really happy. I’m daring to be great!

Limited Tickets are available from: