JAZZA DICKENS: “I’VE THE TOOLS TO BEAT TOMMY WARD ANY WAY HE WANTS TO FIGHT!”

After testing his talent against Cuba’s brilliant Guillermo Rigondeaux for the WBA title in Cardiff last July – he was withdrawn by his corner after two rounds with a fractured jaw – the shifty Scouse southpaw returns straight into a daunting looking mandatory defence of his domestic belt on the mega bill at Leeds’ First Direct Arena this Saturday.

‘This is a real fight and when I know I could be up against it, I certainly don’t ‘big’ my opponent up. No need here,’ says the returning Liverpudlian livewire.

‘Nationally, the fans probably don’t know too much about Thomas Patrick but he’s going to be very competitive. But I don’t fear that. I get off on it.

‘After my injury cured, I was actually good to go in February but we had to wait a little longer to get it on. It’s hard to say if I’d have benefitted from a non-title tune-up to get back into it.

‘But this camp has gone great. I’ve had spars with (Lee) Selby, (Kid) Galahad, Liam Walsh plus John Quigley, a very underestimated super-featherweight from up this way.  I’m very grateful for all the help they’ve given.

‘I’m really looking forward to performing on BT Sport, a bigger platform. I’m very lucky and I intend to make the most of it. I’ve trained my best ever so I should fight my best ever. I’m flying!’

The principals have ‘previous’. In November 2015, Jazza journeyed into Ward terrain in Tyne and Wear and put his title up for tender against traveller Tommy’s elder brother Martin. After a titanic 12 round tussle, Dickens retained but the judges were split.

‘After this one, I don’t want to see another Ward inside a ring, in me life!’ quips Jazza.

‘It’s sad that my fight with his brother wasn’t on the tele because it was a quality war and we both deserved a lot more praise for our efforts than what we got. It’s particularly sad that Martin didn’t get a win, a title or much money. That said, I did think I won a lot more comfortably than the judges had it. It was in his ‘yard’.

Dickens anticipates that Saturday’s spat will be even more keenly contested.

He says: ‘While Martin has decent basics and a good engine, Thomas Patrick has more class, more flair, more natural ability. He’s a lot smarter and more adaptable, has a higher boxing IQ. Without being disrespectful in any way to Martin, I expect that Tommy will go a lot further in the boxing.’ 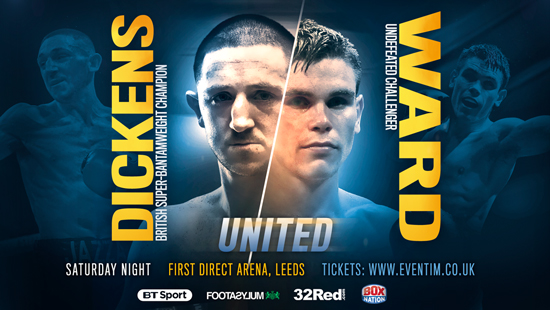 Success on Saturday would accord the Scouser a third notch on the Lord Lonsdale Belt he attained in his home city 26 months back, by schooling Barnsley outlaw Josh Wale over 12.

But while the recent alliance between BT Sport and BoxNation will expand opportunities to secure the crucial fourth British title win needed to retain the belt for keeps, Dickens refuses to confine his ambitions to the domestic scene.

‘It’d be nice to take care of my mandatory but I have to stress that a world title has always been my goal. I believe that that’s my level,’ states Dickens, 22-2, who is coached by Paul and Mick Stevenson at the Everton Red Triangle gym just outside Liverpool city centre.

‘The Lonsdale is a beautiful belt, of course, but you don’t know when you could get hit by a bus so I’d drop everything if another world title opportunity was offered. I can always drop back to British level later on.’

Nevertheless, super-fit, super-fired Dickens certainly doesn’t intend to surrender his hard won strap through complacency this weekend. He knows the scale of the task and insists he is perfectly primed to retain.

‘I don’t really study opponents. I leave Paul and Mick to do the tactics,’ he says.

‘They make sure I’m in great shape and always devise a great game plan. We know what Ward’s best punches are, what to expect (will be) coming back at me. You never know how styles are going to gel so I’ll just play it by ear on the night.

‘But I believe I’ve the tools to beat Ward any way he wants to fight. I win because my boxing IQ is even higher, I’m more mature, I’ve got the championship rounds on my CV and above all, I’m the champ. It’s my belt.’

Remaining tickets for Warrington vs. Martinez on Saturday night are available from Eventim at www.eventim.co.uk and 0844 249 1000.