JEZ SMITH: “MITCH IS A HAMMER, I’M A GOONER. GROWING UP, WE SCRAPPED QUITE A LOT! ”

Older brother Mitchell progressed to a Senior ABA title plus Area, English, InterContinental and WBO European belts but, back in the day, the siblings didn’t always see to eye-to eye. 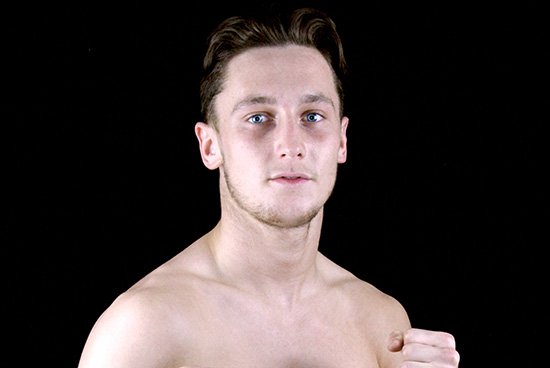 ‘Growing up Mitch and I scrapped quite a bit. He’s a Hammer, I’m a Gooner! Though he’s 14 months older, I was always a bit bigger. He got the short end of the stick!’ quips the Brent born 21 year old who makes his fourth pro start at Harrow Leisure Centre this Friday.

‘Dad took Mitch to the Harrow boxing gym because he was being bullied. I just followed along when I was seven or eight but didn’t take it seriously until I was about 10.

‘I got to numerous national finals. I won the schoolboys Golden Gloves, a junior Three Nations gold plus a bronze at the European schoolboys over in Serbia when I was 14. I entered the senior ABAs twice but both times got beat by my good mate Alfie Pryce from the Hoddeston.’

After getting his arm lifted in 37 of 51 unpaid bouts, the cocksure 5ft 11in roofer joined brother Mitch at the professional stable of one-time British and WBU light-welter boss Jason Rowland last February.

‘I have a good bond with Jason both as a trainer and a mate,’ states Jez who is co-managed by Greg Steene and Mo Prior.

‘He’s settled me down and stopped me bouncing around the ring. As a pro, I’m getting far more power into my punches. Our motto is ‘Train hard, fight easy!’

‘Stylistically, Mitch and I are quite different. Being taller, I’m more of a slick boxer. I’m more Mayweather, he’s more Hatton! I don’t get involved if I don’t need to. I don’t need to go looking to land bombs because I punch extremely hard naturally.’

The lad known as ‘Jezziemondo’ has certainly sparkled in his three paid gigs thus far, wasting a Bulgarian and a Croat in three and two rounds respectively, and registering a four round shut out over 73 fight Trowbridge veteran Dan Carr.

‘Short term, I just want to acclimatize to the pro game, hopefully fit in a six rounder before Christmas then move up to eight and ten rounders next year. Jay (Rowland) will know when to move me on but, just like Mitch, I’ll fight anybody. It’s in our blood!’

This Friday young Jez returns to Harrow Leisure Centre – just a looping left hook from the family home he shares with his dad and Mitchell – and he’s promising to deliver a 5 Star performance for the local parish.

‘I made my debut there and I’m well happy to be going back. A few fans dropped off once Mitch was off the bill but I’ve still done near 200 tickets. It’s a nice venue, home to me,’ he says.

‘I’ve really put the training in so I want to look good, nothing wild. I’ll be hoping to score a stoppage of course but I’m naturally quite strong and powerful. I won’t need to go looking for it.

‘My opponent (Newark’s Fonz Alexander) is definitely a step up, definitely the best I’ve fought as a pro. They say he’s game and tough, comes to fight, but he won’t be very tough when I hit him on the chin. The geezer’s going to sleep!’