JJ METCALF: “I CAN GIVE ANY 11ST FIGHTER IN THE WORLD A REAL GOOD FIGHT.” 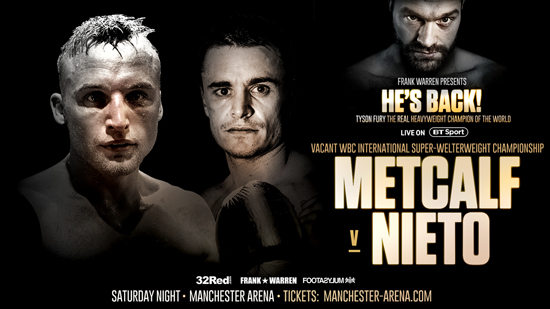 Much avoided Scouse super-welter scrapper JJ Metcalf receives an unexpected opportunity to vault the domestic belts and crash the world rankings on the undercard of Tyson Fury’s ring return at the Manchester Arena on Saturday.

‘I hoped the Jones win would lead to a British title shot so it was frustrating to be out for eight months after such a positive performance. I’m 29 and needed things to speed up a bit cos I’m always in the gym, always active, always waiting for a call,’ says ‘James’ – the second eldest child of feted former WBU light-welter king Shea Neary – who is now undefeated in 17 pro gigs with nine victories by stoppage, since debuting in December 2011.

‘But I’m more than made up with this WBC opening. It could get me a world ranking and push me on to something far bigger. Hopefully, it’ll increase my profile and lead to better fights against the people who’ve been reluctant to fight me, cos I don’t have a profile or reputation.

‘I’m at the stage now where I’ll take anything. If a world title fight was offered I’d jump at it. I can compete with ‘Beefy’ (ex WBO champ Liam Smith) in spars. I’ve never felt out of my comfort zone in any spar I’ve had so I’m very confident that I can give any 11st fighter in the world a real good fight. I can always find a way (to win).’

The MTK managed, Frank Warren promoted former England international has made changes to his support staff ahead of the stiffest assignment of his career.

‘I needed to spend extra time with my Dad so I’ve parted with George (Vaughan) and Derry (Mathews)but Joe McNally is still helping out,’ disclosed the Everton fan who represented Liverpool schools at soccer before embracing the fight game at 16.

‘I’ve also started working with a running partner who’s really pushing me with my roadwork, ahead of my first scheduled 12 rounder. I’ve had quality sparring with John Thain from Scotland. He’s got a fight coming up so is in top shape and his style emulates the Spanish kid’s. I’ve never been more ready.’

With a five-figure crowd expected, and BT Sports broadcasting live, the Mersey mauler is accorded a gilt-edged platform to showcase his wares. He does not intend to profligate.

‘I can’t afford a mediocre performance. I need to get people talking about me,’ says this humble and introverted prospect.

‘Unlike others, I’m never gonna get publicity for talking clever. That’s just not in my nature so I have to prove myself as a fighter to get recognition. But I’m never in a boring fight. Hopefully, this can be my ‘coming out’ parade.’

‘It’s certainly not going to be easy,’ concludes Metcalf, who has only been beyond six rounds twice and never past 10.

‘But hopefully my strength and will to win will see me home and I’ll come away with another win in a fight that the fans enjoyed.’

Tickets for He’s Back are available purchase NOW via the Manchester Arena on www.manchester-arena.com and tel: 0844 847 8000.