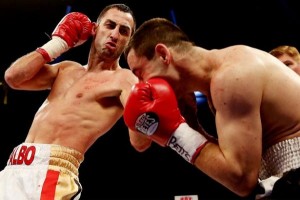 In terms of core ability, red-hot Liverpool light-middleweight Joe Selkirk has few peers on these shores.

Seven years after joining the profession, the 6ft 1in Scouser, a former WBO European Champion, is unbeaten in twelve. He returns to action following hand surgery and now aims to get back on the championship trail.

On Saturday night, at the Echo Arena in his home city, Selkirk returns from a 16 month hiatus, claiming that his carefree ways and brittle fists are a thing of history.

When boxing writer Glynn Evans caught up with the former ABA champion on Wednesday evening, he found a man whose goals are set on the major international rather than domestic belts.

Signing a new promotional deal with Frank Warren should help provide your career with security and direction. That must be a weight off your mind?

Definitely. Once I heard Frank’s plans for me, I knew it was the right deal and now I can’t wait to get going again this Saturday in my home city.

You’ve taken the decision to re-locate your training base to the MGM gym in Marbella. How might that help you finally realise your full potential?

I first went to the MGM gym when I was on holiday in Spain just under three years ago and immediately you could tell it was a really professional set up. There’s a good set of lads over there and the atmosphere is so relaxed. I knew I wanted to be a part of it.

My training camp has gone really well. It’s no secret that I’ve always hated running but I actually enjoy it in the warmth, on the beach. Every morning, once I wake, I want to get up and enjoy the day, get my work done. That hasn’t always been the case.

I’ve also benefited from loads of top quality sparring over there with guys like James DeGale, John Thain and the ‘Armenian Shark’ (Archak TerMeliksetian), who’s been in with the likes of Sergio Martinez. There are always plenty of other top fighters at the MGM who you can work with.

‘Taff’, the conditioning coach there, is the best I’ve worked with and he’s got all the fighters on board with his circuits. He’s also a boss fella.

In the past you’ve been coached by Georgie Vaughan, your old amateur trainers (Mick McAllister and Mark Quinn) from the Rotunda ABC then Oliver Harrison. For this fight Georgie’s son Danny has assumed the role of chief coach. How will that help?

His dad Georgie has been involved since the start of my pro career. He’s the best in the business and Danny obviously picked up the trade from him. Now Danny has more of a say and puts his own spin on it.

Above all, it’s about our relationship. Anyone can hold a set of pads but Danny’s strength is his connection with me and, especially, his corner work on fight night. He understands me; knows when I’m in a good mood or a bad mood, when to push me and when to ease off.

In the past you’ve had a reputation as a bit of a party animal. Justified?

(Laughs). To be fair, I was just a young lad and a lot of that was out of training; between fights or when I was injured. People saw my out but didn’t realise there was nothing in the pipeline for me. When I had a fight lined up, I was usually in the gym.

As a younger man, I’d go out on a bender and then train the next day as though nothing had happened. However, as you get older you simply can’t do that anymore.

There is a growing consensus that you might be the most naturally gifted fighter in the talent loaded city of Liverpool. Having won the ABAs in 2007, would it be fair to say that, at 29, you should be further ahead in your pro career?

I personally don’t believe half of the (complimentary) stuff that’s said about me. However, I’ve been a pro almost seven years now and I should be at a stage where I’m topping bills at the Echo.

My right hand has been a problem since the amateurs and, as a result, I’ve not really been able to throw it with full force. For most camps, I’ve had to prepare with just one hand. I couldn’t spar properly, couldn’t punch the bags or pads ‘full on’. That affects both your fitness and your confidence.

In fights, I’d be one paced and I struggled to get out of first gear. I’d be conscious of just getting through fights without hurting myself rather than focussing on hurting my opponent. Basically, I was trying to get a win, the easiest way I could. Therefore, my performances as a pro haven’t been anywhere near the standard I know I’m capable of. I still won ’em all, mind and stopped half, which isn’t too bad.

I’ve now had three operations. Mike Hayton, the brilliant surgeon who sorts out all the fighters with hand problems, took away a ball of nerves that was causing my trouble and, honestly mate, the hands brand new. Saturday will be first fight in ages where I’ll enter the ring with two good hands.

What would represent a successful night for Joey Selkirk on Saturday?

I’m coming back in an eight rounder and, after 16 months out, I expect to be a bit rusty early on. But, like I say, I’ve trained hard for 10 weeks with two good hands so there’s no excuses for being one paced any more.

Fans can expect to see a far more aggressive Joey Selkirk, going through the gears and throwing the right hand full force. Right now, I feel good and, given regular fights afterwards, I’m going to be even better.

My ideal night would be to get a few decent rounds under my belt, show my class then finish with a spectacular knockout.

Your pal Liam Smith presently has custody of the British light-middle title. Could you put that friendship aside for 36 minutes or less?! If not, what future match-ups could get your juices flowing?

Me against ‘Beefy’ would be a great fight but I don’t really see it happening. We sort of grew up together at the Rotunda amateur gym and are very good friends. I don’t think either of us would want it.

I’m not too interested in the likes of Nav Masouri and the English title. I believe I’m past that level now. After a couple of fights to sharpen up, I’ll be looking for the likes of (Commonwealth champ) Liam Williams. I rate him; strong, well schooled under Gary Lockett but, at me best, I’d be confident I could beat him, most definitely.

Given three or four fights to build momentum, I’d have no issue going in against Jack Culcay (Germany’s European champion) before the end of the year. Ability wise, he holds no fears. Frank and Danny both know my capability.

I’ve never given up on my dream of becoming a world champion and, provided I train hard, I know I’ll be there or thereabouts. If it doesn’t happen, trust me, it won’t be for the lack of trying.