When Diego Magdaleno swaggers to the ring for Saturday’s mouth-watering WBO lightweight showdown with Terry Flanagan at the Manchester Arena, he shall be armed with one of the best coaches presently active in the sport.

Mexican born Joel Diaz, 42, has already steered the likes of Tim Bradley, his younger brother Julio Diaz, Abner Mares and Oscar Figueroa to global glory and he’s bristling with confidence that Las Vegan Magdaleno will make it a fistful of world champions for his CV this weekend. 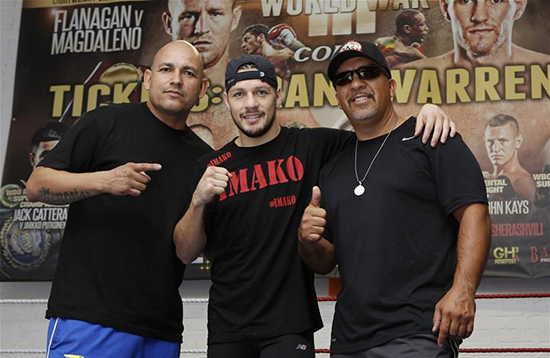 ‘This is my third visit to the UK with a boxer and I really like it,’ says the cordial ex pro, who once went 12 rounds in a 1996 IBF lightweight challenge with South Africa’s Philip Holiday but was then forced to retire a year later, whilst WBC mandatory contender, after a detached retina left him blind in one eye.

‘I handled Tim Bradley when he took the WBC (light-welter) belt from Junior Witter and I brought my brother Julio here to box Amir Khan. Every time, the British folk treat me well so I’ll keep coming back here.

‘Boxing is huge over here. The fans are really knowledgeable and bring real energy to the arenas. But we know what to expect on Saturday. When Julio fought Amir in Sheffield (April 2013), the fight was a lot, lot closer than the judges scored it. Being on different (foreign) soil, Diego knows he’ll have to push to the extreme if he’s to become world champion. He’s more than capable.’

The pair has worked together since Magdaleno got a rough call in an April 2013 WBO super-feather challenge to Puerto Rican roughhouse Roman ‘Rocky’ Martinez in Macao. The 28 year old Beverly Hills born southpaw has since won five straight in credible company, with three opponents failing to cross the finish line.

‘He’s very disciplined, never complains, and that gives him the ability to pull through when things get tough inside the ring. He’s also got great ability. He’s a very smart fighter, able to smother opponents’ work and throw back with volume.

‘He loves to exchange and he has a good knack for picking the right shots. His punching power has improved a lot since he’s been working with me but his greatest attribute is his heart.

‘Outside the ring, Diego is a very humble, very giving, very likeable kid; always smiling and well mannered. He has a good heart.’

On Saturday evening, Diaz’s capacity to formulate a winning game plan shall be tested to the full when his charge squares off with unbeaten fellow southpaw Flanagan in what is sure to be a tight, high grade encounter.

‘Terry and Diego’s styles suggest it’ll be more of a technical fight,’ he predicts.

‘Terry has good hand speed, great footwork, moves well and is a smart fighter. But he lacks the power to really hurt opponents. I always bring my fighters well prepared and our mind set is solely focussed on winning.