JOHNNY GARTON: “I NEVER THOUGHT I’D GET ANYWHERE NEAR AS FAR AS I HAVE!” 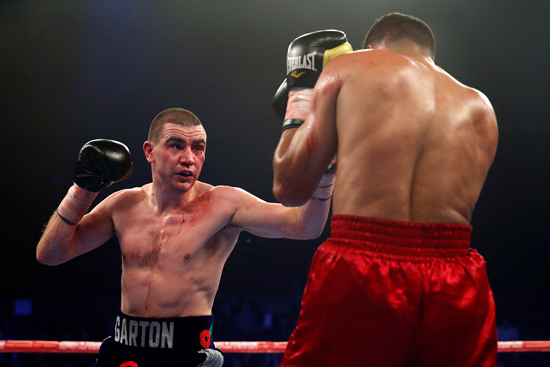 The man they call ‘The Pexican’ in honour of his rough and ready ring manner enjoys an unexpected berth on Hall of Fame promoter Frank Warren’s festive fiesta at London’s Copper Box Arena on December 9th.

The 30 year old ex Southern Area and English champion contests the vacant IBF European title on the undercard of James DeGale and Lee Selby’s IBF world title defences and knows that an impressive victory is likely to cement a crack at the British title and a slot in the IBF world rankings.

‘Turning pro, I never thought I’d get anywhere near as far as I have,’ claims the chirpy south Londoner who has lost just once in 22 (7 early wins).

‘My goal starting out was simply to fight for a Southern Area belt, win or lose. I’ve already gone way beyond that. If I had to retire tomorrow, I’d be more than happy with my career.’

With 10 defeats in 35 bouts and just a brace of South-East London Divisional titles to garnish his amateur CV, grafter Garton was a long shot to hit the heights when he entered the profession, well into his 25th year, back in October 2011.

However, the free swinging slugger has made giant strides since trainer Al Smith convinced him that, in the austere world of paid prize fighting, it’s far more profitable to give than to receive.

‘As an amateur, a friend took me around loads of gyms to spar and I spent time at Al’s iBox gym, working with Bradley Skeete. In 2011, Al offered me a trial, I came through and signed to go pro with him,’ recalls Garton.

‘It’s such a brilliant gym to be a part of.  Al lives for his boxing and all the lads do everything together; win, lose, laugh, socialise. It’s obligatory to turn up if a gym mate is boxing. We’re all very close.

‘Whereas I was about all out aggression in the amateurs, Al’s very defence minded and we’ve gradually reached a compromise that suits and succeeds. I still march forward but now I move me head….occasionally!

‘I do graft hard in the gym but I’ve had such tough hard spars that I have to learn. I’ve worked with the likes of Andy Lee, Liam Williams, Gary Corcoran, Larry Ekundayo, Selcuk Aydin and Josh Kelly but (British welter champion)Bradley Skeete is probably the most important person behind my improvement. He has such a good jab and is so clever. He’s going way beyond British level.’

The sole reverse in his six year paid career was a second round cuts loss to future British and European boss Sam Eggington in an April 2014 Prizefighter sprint.

‘Sam gave me a real beating but I still enjoyed it. I just love fighting!’ quips the former car mechanic who has a five month old daughter

‘Him going on to do so well did me a huge favour. Al never wanted me to enter anyway and his game plan went out the window the moment Sam landed on me. I just had a ‘tear-up’ and came up short. Al gave me a real grilling afterwards!’

Suitably chastened, he listened, learned and recovered sufficiently to obtain and retain both the Southern Area and English 147lb titles between 2014-16.

‘On December 9th I hope to excite, do full justice to the ‘Pexican’ nickname that my fans have given me and strengthen my case for a British title fight early next year. That’s the plan!’ says Garton.

‘I’ve not fought since April so I just hope that whoever comes out of the opposite corner will stand and give me a right good scrap. Whenever there’s been a title on the line and the opposition brings a winning record and a bit of ambition, I win by stoppage. They take a few risks and I can ‘get hold of ‘em’!

‘A win at the Copper Box will put me right into the British title mix for when Bradley opts to vacate. That’s the one belt I’ve most wanted to box for. Hopefully, I can challenge whoever in February or March. Now I’m definitely top five in Britain and on the verge.’