JONO CARROLL AND DECLAN GERAGHTY TO REMATCH IN BELFAST 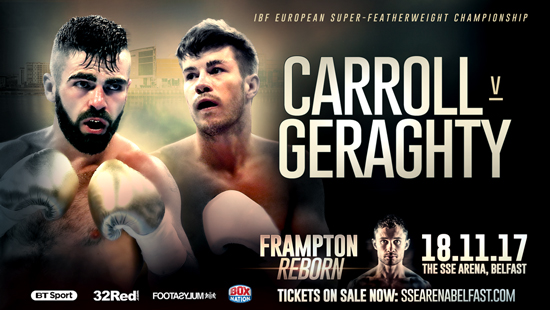 It is a fight Irish boxing fans have clamoured for since Carroll defeated Geraghty via DQ in late 2014 and now both men are determined to settle the score.

Carroll (14-0, 1 KO) won the IBF European title in a Fight of the Year contender against Liverpool’s John Quigley at the Belfast Waterfront in June and is delighted to make the first defence of his title against his Irish rival.

“This is a fight that I’ve wanted for a long time,” said Carroll. “Deco has talked about it many times but the fight had never been presented to me. This is the first time that it’s been offered and I accepted immediately. It’s about time it happened and now we can put it all to rest.”

The first clash ended in controversial circumstances, however, Carroll believes the outcome this time around will be decisive and he has no doubt who will emerge victorious.

“I feel like I’m going over old ground a little but it’s a fight that I need to get out of the way to push on with my career. I want to be remembered as a fighter that accepted every fight that came his way.” 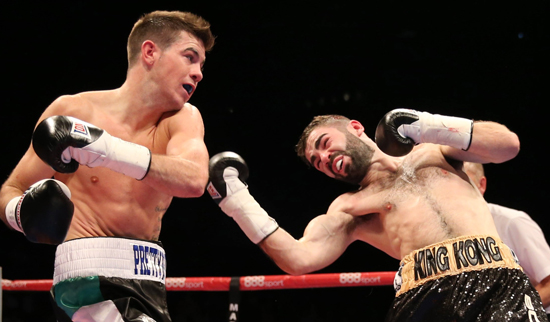 “It’s going to be an exciting fight and one that the fans have been asking for. I always said it would be a great fight for a title and I’ll give him his crack no problem, let’s get it on.”

“Deco is a one-dimensional fighter and can only box, he can’t fight. In the first fight, I knew I’d drag him into a fight and I’m going to do it again. If he stands and bangs I’m going to spark him out, his legs will slow down and then I’m going to smash him up.”

Geraghty (15-2, 4 KO’s) bounced back from his Irish title defeat to James Tennyson with a dominant display against Michael Roberts Jr and is excited to get the opportunity to avenge his defeat to Carroll.

“It’s a fight I’ve always been after and it’s been a long time in coming.” Geraghty said. “The last time I was winning the fight but got disqualified, this time there will be a different outcome.”

The popular Irishman is pleased the IBF title is at stake but ultimately is driven by the opportunity to gain revenge against his Dublin rival.

“The chance to fight and defeat him is my motivation for this one. The belt is a bonus but it’s not the main focus. I wanted the rematch straight away but now is a good time as we are both still young and fresh.

“This one is like Christmas come early for me. I’m looking forward to the challenge and I believe that I will put a lot of things right in this fight and then put this situation between us to bed.”

Tickets for Frampton Reborn are on sale now via the SSE Arena Belfast Box Office, www.ssearenabelfast.com and 028 9073 9074.