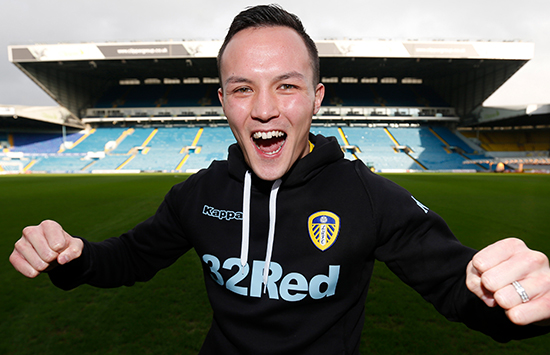 With English, British, Commonwealth, European and WBC International featherweight belts already gleaming on his sideboard, the fanatically followed Tyke knows emphatic victory will fast track him into a world title challenge before 2017 is through.

Unbeaten in 24 and already world ranked by the WBC (3) and IBF (6), warlord Warrington casts a critical eye over the runners and riders obstructing his passage to global glory.

Carl Frampton: ‘It’d be a privilege to test myself against him!’

The heavy handed ‘Jackal’ from Belfast surrendered his unbeaten tag and WBA Super belt on a tight majority to Leo Santa Cruz last January but remains one of the most exciting and marketable commodities in the division.

Josh says: ‘I have to make it clear that I want a world title first. That means more to me than scalps. Any fight with Carl happens after a world title has been secured. And if I can win a world title before Carl can reclaim one, we could definitely do this in Leeds and secure home advantage. There’s plenty of Leeds-Irish here. He’d come!

‘But it’d be ignorant of me not to scrutinise all my potential future opponents when they fight, not just the champions. I try to emulate all the good things they do as well as try to identify the faults.

‘I was a big fan of Carl’s as he came through. He’s a very intelligent boxer, good ring craft; knows when to box, when to scrap and he’s equally adept at both. He’s got good movement and I’m always impressed with his shot selection.

‘But Frampton’s power certainly doesn’t put me off. He wobbled plenty at super-bantam but isn’t quite as dramatic at feather. Look, at world level, they all hit you hard but, right now, there’s no Golovkins at nine stone.

‘I’ve seen a few things that I might be able to capitalise should I fight Carl. Sometimes he switches off and gets drawn into the other man’s fight which I think is where he went wrong in the second Santa Cruz fight. Leo used his range and kept Frampton long, forced him to step back in straight lines. But I can’t be too critical. It would be a privilege to test myself in a scrap with Carl.’

Gary Russell: ‘You have to disrupt him.’

Formerly a world amateur medallist and 2008 Olympian, this sharp and savvy Washington DC southpaw (27-1) has reigned as WBC champ since March 2015, retaining just once in 24 months.

Josh says: ‘It’s a very hot division right now but, for me, Russell is the best of the bunch. He has good boxing ability, throws classy combos and is southpaw which makes him that little bit more awkward. He’s pretty smooth, sets his shots up well and he’s got crazy speed. He claims to have the fastest hands in boxing and there’s very few who could argue with that. I spoke with Patrick Hyland shortly after he was stopped in two by Russell and he said the shot that dropped him was blinding. He just didn’t see it. 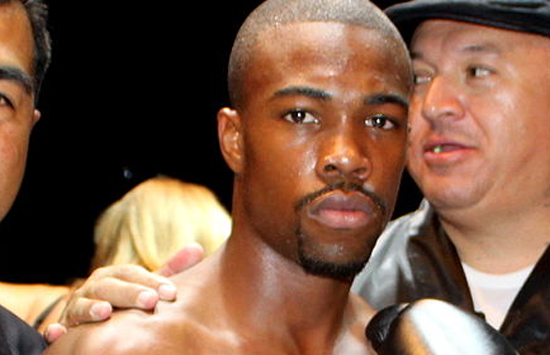 ‘Losing a majority to ‘Loma’ is no disgrace and Russell was always in that fight. I thought he gave a really good account of himself against one of the best fighters on the planet. That night he took some really big shots and gave plenty back. Personally, I’d place Russell in the top ten pound-for-pound himself.

‘Bringing him to the ‘bear pit’ (Leeds) would obviously give me a big advantage. I don’t think Russell is a huge draw in the US and the crowd I can generate would ensure he was well paid to risk the travel. I’d also have physical advantages in height and, probably, reach but it depends how you use them. He likes to come in short and squat. Russell being southpaw wouldn’t be an issue. I’ve had my share. Samir (Mouneimne) was a switcher, Rendall (Munroe) was southpaw so was (Dennis) Tubieron. I beat all them comfortable enough.

‘Loma’ showed how Russell can be beaten. Russell likes to dictate the pace so you have to disrupt him, keep him busy, keep him guessing. You can’t let him dictate. Movement would be important; in and out, change angles, don’t attack in straight lines. It’d take a high work rate and a lot of intelligence to beat Gary Russell but it definitely can be done.’

Leo Santa Cruz: ‘He’d make for the most exciting fight.’

Josh says: ‘Following his victory over Carl Frampton, I’d place Leo a shade behind Gary Russell. Leo has a really high work rate and a helluva chin. He was pissing himself laughing when Carl landed bombs on him. That night he also proved he could box and stick to a plan. We’ve always known he could fight.

‘Of all the present champions, I think myself against Santa Cruz would make for the most exciting fight. But I’d be foolish to try and mix it with Leo. He thrives on trying to ‘war’ you out of there. 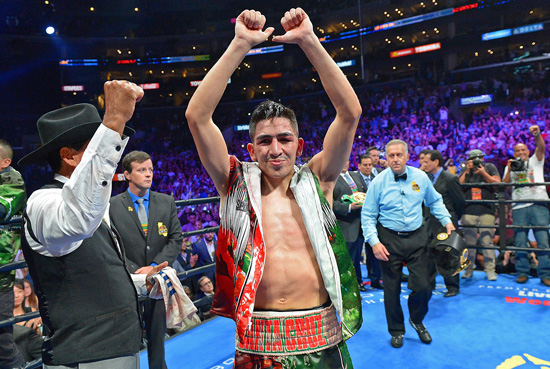 ‘But he’s another who, in the past, has been known to fight the other guys fight when you ratchet up the pressure. To beat him, you’d need to box a really clever fight; smart and elusive, drop in the odd tooty fruity! Pressure him, then drop back.

‘Though Santa Cruz is a big name, big draw, over in the US right now, if I could win a world title myself why won’t he want to come to Leeds for a stadium fight and a huge lump of money?

‘Like I say, this division is red hot. No one reigns for too long. The champs either move up or get beat. Ideally, I’d like to share a few rounds with each of these leading featherweights. Whoever I beat, I’d receive really good props.’

Oscar Valdez: ‘He can be made to look silly.’

Lavishly touted by Oscar De La Hoya’s Golden Boy Promotions, this mallet fisted Mexican (21-0, 18 stopped) claims the WBO strap and is the only champ on the featherweight playground who shares Warrington’s unbeaten status. 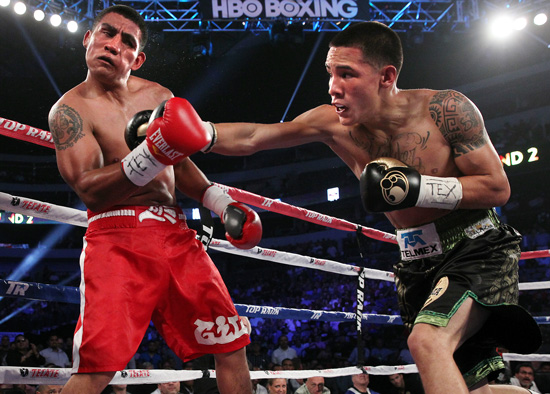 Josh says: ‘Valdez is starting to make quite a name for himself in the US. He’s very exciting. As a double Olympian, Oscar must have a pretty good skill set and he chucks lots of bombs. But he’s not unbeatable.

‘Right now, I need to get my ranking higher with the WBO if I’m to force a Valdez fight but I’d travel to the US or Mexico, without a doubt. That said, the US is starting to notice that we create big dough in the UK. That’s a massive pull.

‘When Oscar first began to feature on televised shows, I thought: ‘Wow! A special talent.’ He’s a good boxer with a very good style but in his last few fights, he’s shown quite a few bad habits and made some basic mistakes. If they happened in one fight, you could dismiss it as an off night but they’re happening repeatedly. He can’t seem to shake them off.

‘Sure, his record shows loads of early knockouts but look at the standard of his competition before he landed at world level. Weak. Oscar’s thick set, comes in short and squat, then tries to shoot over the top. He has heavy hands but gets stoppages more by accumulation than one shot ‘take out’ power. He doesn’t seem to put much thought into his work, just loads up, wild! We know how to deal with wildness. He can be made to look silly.’

Lee Selby: ‘I want to punch his head in!’

The spidery Barry switcher (24-1) has held the IBF slice of the 126lb pie since May 2015 but, for all his obvious ability, has defended just twice and sells like cold cakes at the box-office.

Josh says: ‘Lee’s one of the few I’d need to spot a little bit of height and reach to but he’s far shorter than Hisashi Amagasa, the Japanise fighter I defended my WBC International against. He was a near six foot freak but I pretty much shut him out. Featherweights don’t come taller than that. You just need to box clever, get on their chest and bite ‘em (laughs)!

‘Selby does use his reach well, to hit and move off. He’s got good variety and is usually very busy for six rounds, snatches the early rounds, then protects the lead. Downside? He thinks he’s a banger when he’s not. He puts far too much into his punches then fades.

‘Lee might be champion but we bring the gate. If you have no fan base you have to travel to earn money. If and when it happens, it’s very likely to be in Leeds.

‘Last year, Selby was red hot favourite as the world champion I’d challenge. It didn’t happen but the fight’s certainly not dead. I don’t think he’s with Sky any more. The fight and animosity have been stewing for a while now and I’m very eager to prove all my doubters wrong.

‘There’s definitely a bit of friction. I’ve never slagged off anybody’s ability or achievements but he gives me no credit and his fans made it worse on social media. Now my lot have got involved. Let’s just settle it. I want to punch his head in!’