JOSH WARRINGTON HAS CURRY NAMED AFTER HIM 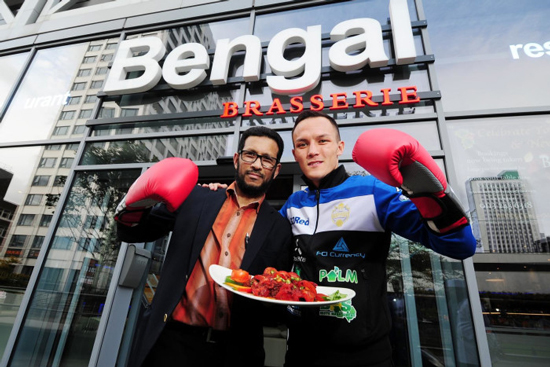 Leeds Warrior Josh is already the tasty favourite for a World Title shot after his IBF Featherweight Title Eliminator against Dennis Ceylan at First Direct Arena on October 21.

But the hottest ticket in town just got hotter.

He’s had a curry named after him by award-winning Bengal Brasserie, celebrating the boxer’s undefeated 25 win record and their £400,000 restaurant opening near the Arena, in the Merrion centre.

The Rogan Josh Warrington is an aromatic lamb dish, with a gravy based on browned onions, garlic, ginger and aromatic spices, cloves, bay leaves, cardamom and cinnamon.

Tomatoes give it a boxing blood theme and extra chilli packs a punch.

“I love it. It’s not every day you get a curry named after you,” said the WBC International champ.

“I’ve been described as a hot and spicy fighter. They say I’m tasty. Now I really am.  I love the colour. That’s what’s happening to anybody who stands in my way of that world title.

“It’s given me a bigger appetite for the World Title Eliminator and to get my teeth into Dennis Ceylan across the road at the Arena on October 21. I’m on a strict diet until then but I’ll celebrate with one of these curries.”

A win will set up the clash boxing fans want – a World Title fight against Lee Selby.

Bengal Brasserie managing director Malik Miah said: “Josh is our Leeds boxing hero so we’ve named this curry after him for fans coming to the Arena. Perhaps we’ll do a Nicola Naan bread after Nicola Adams.”

For a chance to win a Rogan Josh Warrington meal for two at the Bengal Brasserie and pair of tickets to see the fight enter the Yorkshire Evening Post free prize draw by e-mail.

E-mail your full name, address, mobile and landline numbers to raza.zulfiqar@jpress.co.uk, with #JPcompJWDC2 in the subject field.

Tickets for Warrington v Ceylan are available from: