JOYCE READY TO CONQUER THE WORLD 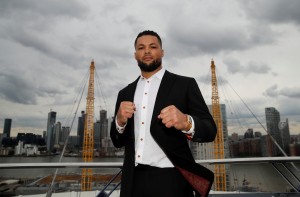 FRANK WARREN believes Joe Joyce will be challenging for the world heavyweight title inside a year.

Joyce (9-0, 9KOs) is charging up the rankings. He already has former WBC champion Bermane Stiverne on his CV and is hellbent on American star Jennings joining the list.

Hall of Fame promoter Warren who co-promotes Joyce with Ringstar Sports says: “Some fighters can be fast tracked and Joe is taking that path.

“People say he is 33 and needs to get a move on, but I would say it’s more down to the boxers he has faced early in his career and his fantastic amateur pedigree.

“He is one of the most successful boxers ever in the World Series of Boxing which is an incredibly tough competition.

“At the Rio Olympics he was desperately unlucky not to win the gold medal in the final against Tony Yoka.

“There is a lot of jostling going on in the heavyweight division. This time next year he will be right in the thick of it and when he does get his chance he’ll be going in to win and remain champion.”

Another appealing option for ‘The Juggernaut,’ is a clash against the winner of Saturday’s bill-topping vacant British title fight between Daniel Dubois (11-0, 10KOs) and Nathan Gorman (16-0, 11KOs).

“Joe against Daniel or Nathan would be a tremendous all-British clash for the tail end of the year and a fight I would love to see,” added Warren.

“All of them have serious world title aspirations and fans are making a case for each of them winning their fights.

“After Saturday, the picture will be a lot clearer about what will be next for all four. One thing for sure, two of them will be in the world title picture.

“These are heavyweight fights that make people want to watch boxing and include the three best heavyweight prospects in the world.”