JOYCE TAKES ON A GIANT AT STEVENAGE 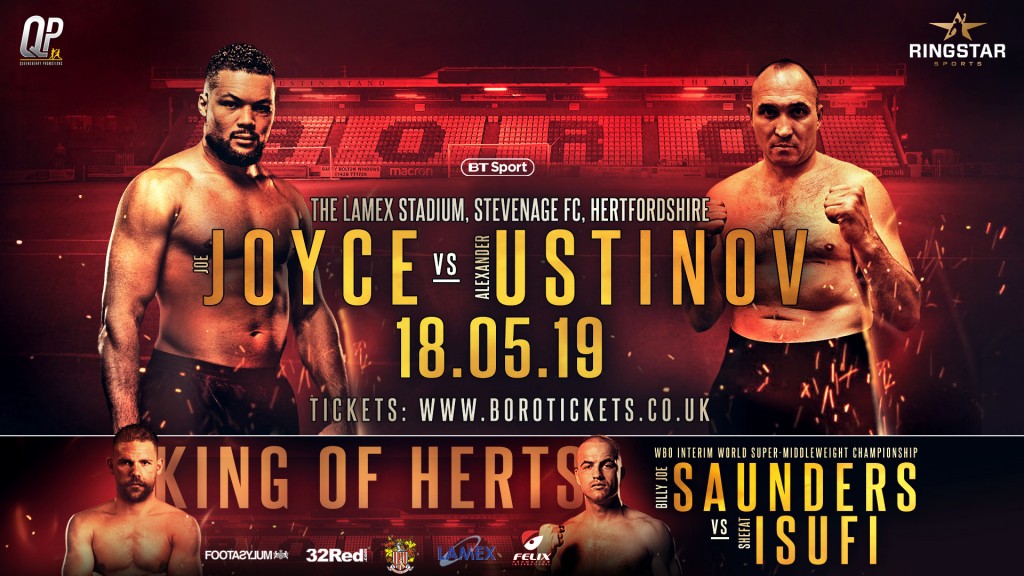 JOE JOYCE WILL encounter a giant in the shape of former world title challenger Alexander Ustinov when he returns to the ring on May 18 at the Lamex Stadium live on BT Sport.

The 6ft 7.5″ Russian will provide a tall order for the 8-0 Joyce, who is having his first fight following his promotional alignment with Frank Warren at the home of Stevenage FC as chief support to Billy Joe Saunders challenging for the vacant WBO Interim world super middleweight title against Shefat Isufi.

Ustinov, 34-3 (25 KOs) has longed been ranked highly amongst the heavyweight contenders and was unbeaten over the first seven years of his professional career until challenging for the European title and the vacant IBF world title against Kubrat Pulev in September 2012.

He remained unbeaten during his next seven fights, during which time he won the WBA International belt, before falling to a points defeat in a bid to win the vacant WBA regular world title against Manuel Charr in November 2017.

After a year of inactivity, Ustinov was last in action against the in-form Michael Hunter in November of last year in Monte Carlo, where he was stopped in the ninth round.

The Olympic silver medallist is also mandatory for British, European and WBA regular world title challenges following a successful start to his professional career that has seen him register eight straight victories via KO.

“I could have waited until the big fight night on July 13th, but I wanted to keep busy. I didn’t want a journeyman, so we chose a 6 foot 8 inch giant and former world heavyweight title challenger Alexander Ustinov who’s only lost 3 times. He is big, awkward and he can punch. My aim is to take him out in spectacular fashion and put on a great show for the fans at the Lamex stadium.