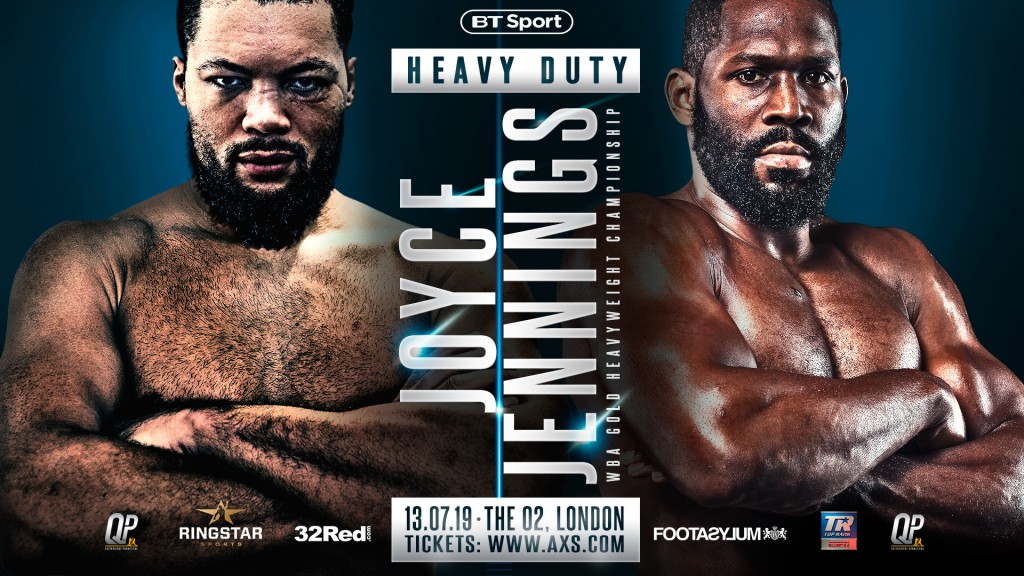 HEAVYWEIGHT sensation Joe Joyce will face his toughest test as a professional when he tackles former world title challenger Bryant Jennings on the ‘Heavy Duty’ show at The O2, London on Saturday July 13.

The Londoner is being fast-tracked to the top and a successful WBA Gold title defence against the American star will move him even closer to a world title challenge.

The potentially explosive encounter is the co-feature bout on a blockbuster card headlined by the vacant British heavyweight championship clash between young guns Daniel Dubois and Nathan Gorman.

Joyce (9-0, 9 KOs) annihilated another former world title challenger Alexander Ustinov earlier this month and admits: “This should be my toughest fight to date.

“Bryant Jennings has been in very big fights and he gave Wladimir Klitschko a tough night before he fought Tyson Fury.

Jennings (24-3-0, 14KOs) lost on points when he challenged Ukrainian great Wladimir Klitschko for his world titles at Madison Square Garden in April 2015.

He then lost to Cuban Luis Ortiz before going on a five-fight winning streak. That run ended in January with a 12th round setback against unbeaten Oscar Rivas, a fight many believe Jennings was winning until the dramatic final round.

“I respect Bryant for stepping up and taking this fight. I intend to send a statement to the heavyweight division on July 13th and it won’t be long before I get my hands on those big titles.”

“I am the only one who can beat myself. Nobody can beat me. When I’ve lost, it’s been because of me, not my opponent.”

And Jennings warned this is just a start of a mission to topple British heavyweights adding: “I am ready to go now. The Oscar Rivas fight is in the past, and I’m ready for the challenge that’s ahead of me.

“After this, I’m coming after all the other UK heavyweights. They are the ones running the division.”

“Bryant Jennings is a quality fighter who operates at world level and this is the perfect fight for Joe to showcase his credentials and put himself in the running for major titles.

“This is a step up in class for Joe and a mark of the progress he has made after just ten fights as a pro.

“It is the opportunity for him to post a big message to the heavyweight champions and contenders that a new force is rapidly making up the ground towards world title contention.

“This is a great fight added to what is already shaping up to being a fantastic card for the fans at the o2 Arena.”

Joyce v Jennings is promoted by Queensberry Promotions in association with Ringstar Sports and Top Rank.

Richard Schaefer of Ringstar Sports said: “The heavyweight division is the glamour division of boxing again. Indeed July 13th will be another glamorous night for Joe Joyce.

“With Bryant Jennings, he has the biggest and most dangerous opponent of his career but I am sure that ‘The Juggernaut’ will pass with flying colours and continue his march towards the heavyweight championship of the world.”

“I wouldn’t be surprised to see him easily beat Joe Joyce. Bryant has fought the best heavyweights in the world, and Joe has seen nothing like him as a professional.”