Bulgaria isn’t exactly a hotbed of professional boxing, so it was surprising to see a Bulgarian judge appointed to last weekend’s WBC International featherweight title contest between Josh Warrington and Japan’s Hisachi Amagasa in Leeds. Even more surprising was the scorecard of Mr Ventisislav Nikolov who marked it 120-107 in favour of Warrington, which included a mysterious 10-8 round 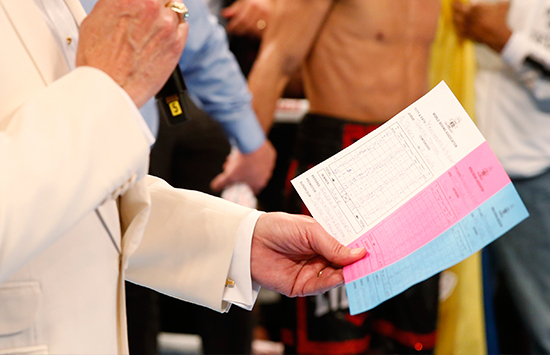 Unbelievable! Yes, Warrington boxed well and won the fight clearly (117-111/118-111 in the eyes of the other judges), but 120-107? A 13-point differential in a 12-round fight that was fairly evenly contested throughout without a knockdown in any round?

That’s atrocious judgment. What on earth was going on in his mind? If anything, such nonsensical arithmetic detracted from Warrington’s victory.

It is time to tighten up on the quality of judges. I hope the Board of Control are monitoring the situation and, in this particular case, it should be made clear to the WBC and other world governing bodies that Mr Nikolov won’t be welcome back.

Boxing doesn’t need this sort of judging – and I have to say there have been some curious ringside assessments in several other fights over here recently.

Not least the show at the Echo Arena, Liverpool, on April 2 when there were some extremely odd assessments, including the draw awarded between British lightweight champion Scott Cardle and Sean Dodd. Promoter Steve Wood claimed the ringside judges were influenced by the support of Cardle’s gym mates and his father, all of whom were very vocal during the bout.

“I don’t think the judges are ‘bent’, but I do think they were influenced by the Joe Gallagher ringside corner and the shenanigans of Cardle’s dad. “I think it has affected their views because they must have watched it back and relaised they made big errors. From my point of view the board really need to look at these bad results and put someone in charge of these referee’s and judges.

“Maybe use some of these funds to set up some kind of school for them because they are obviously incompetent.”

I also like the idea muted by the WBC of providing judges with ear mufflers so they cannot be influenced by the supporters of either fighter – and also to move them away from the ringside TV and radio commentators.

Of course judging is always subjective. But it also has to be sensible.

Judging by recent photos, Amir Khan is already looking more like a middleweight than a welterweight as he prepares for his upcoming BoxNation televised WBC title bout with Canelo Alvarez in Las Vegas on May 7. He reckons he is already close to the agreed 155lbs limit.

That’s all well and good, but I wonder if Amir has bulked up too soon and whether the excess poundage will affect the mobility that will be so vital against the Mexican.

Moreover, the problem might come when he has to shed that extra weight should he wish to get down to welterweight again, although whether he will need to after such a massive pay day remains to be seen.

High life with the Lions

Congratulations to the GB squad in getting nine qualifiers through to what might be the nations’ finest ever boxing Olympics in Rio this summer. And also in reaching the semi-finals of the WSB tournament.

Not only is this good for what used to be called amateur boxing (now the official term is ‘open’) but also for the authentic pro game as it is highly likely that several of the putative medalists will be joining the paid ranks after the Games – including big Joe Joyce, who will be an interesting addition to the burgeoning heavyweight scene.

I’m absolutely delighted. I’m pleased that its on BoxNation, they really stepped up to the plate, they gave us a great deal, the best deal. We like their passion at BoxNation because they understand the fight game.

Tyson Fury’s promoter Mick Hennessy on why the return with Wladimir Klitschko is on the Channel of Champions.

@SkySportsBoxing how can u guys keep talking shit about me after I made you guys £4.6million from my last fight. Not good guys.

Tyson Fury tweets his displeasure about the conduct of the other channel.

I would hope the judges are not influenced by what is going in at ringside, nor do I believe them to be. Look at how many fights and championships we host in this country. I would say that the percentage of of those that are deemed ‘bad’ decisions is very small.

Tomorrow: The Big Interview with Nathan Gorman: ’I need to bang a few people out.’