The jab and move specialist, who is unbeaten in over four years, makes the first defence of his WBO Inter-Continental title on Saturday 2nd April at Harrow Leisure Centre, live and exclusive on BoxNation. 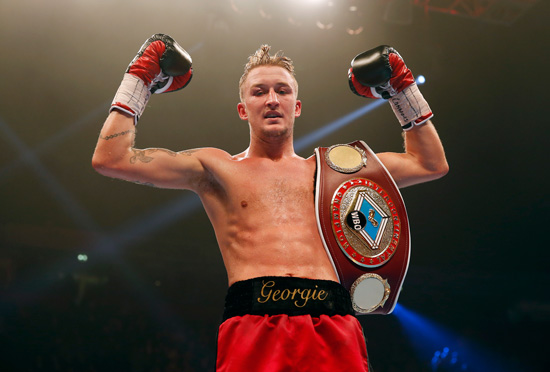 Last time out the 25-year-old upset the odds to inflict a first defeat on Boxing Writer’s Young Boxer of the Year and former sparring partner Mitchell Smith. The self-confessed ‘trainerholic’ wasted no time in getting back in the gym and is gearing up for a busy 2016.

He said: “This year is all about staying unbeaten and racking up the wins. I’m guessing with this Inter-Continental title if I carry on winning it’ll push me right up the rankings. Hopefully if I stay unbeaten and get some good fights with big names I’ll get a shot at the British title eventually; that’s my goal at the minute and all I’m concentrating on,”

“I don’t want to get ahead of myself, I’m going to take things one fight at a time and see where it takes me. Winning the British title outright is my dream and anything on top of that would be a bonus. Until you’ve reached that level you don’t know if you’re capable of going on to bigger things.”

The one time scaffolder is chomping at the chance to showcase his skills to BoxNation viewers again after overcoming the swaggering starlet Smith with a points win and says he’d be open to a rematch somewhere down the line.

“We’ll have to see what comes around but I would be up for that fight again. I know he said that he didn’t box to his full potential and he made a few mistakes in training in the lead up to the fight so I’m sure he’d like another crack at me,” said Jupp.

He added: “I still don’t think I boxed 100% in that fight so there’s a lot of things we can improve on. I did a few things wrong and when I made him make mistakes I didn’t always make him pay for them so we’ve been working on that in the gym. It definitely gave my career a boost, a lot of people got to see me fight and I hadn’t really been involved in a big show like that before so it was good.”

The humble Jupp, who turned pro at 19, is coached and managed by ex-pro welterweight Derek Grainger at the Ringside Gym in Bow, East London. Currently enjoying a nine fight winning streak, Jupp is looking to test himself against the very best in Britain.

He said: “I don’t really zone in on one person. I would say the top two Liam Walsh and Stephen Smith are a bit further ahead than everyone else but there’s some good names below them in the top ten. There’s some exciting domestic fights to be made and I’d be happy to fight anyone if it’s good for my career.”

Welshman Liam Williams headlines the show when he defends his British and Commonwealth Super-Welterweight titles against Rotherham’s Nav Mansouri.

Chief support on the card sees Belvedere’s George Jupp, fresh from his massive upset of Mitchell Smith in December, make the first defence of his WBO Intercontinental Super-Featherweight title.

Asian boxers are the new powerhouse in the sport and a strong contingent led by Indian superstar and Olympic Bronze Medalist Vijender Singh, plus hot Acton flyweight prospect Prince Patel, the professional debuts of amateur stars Sanjeev Sahota from Romford, and the Prince Naseem Hamed prodigy from Staines-upon-Thames Tony Bange.