JUPP TAKES ANOTHER STEP TOWARDS BRITISH TITLE AT WEMBLEY 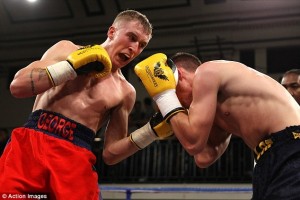 Boxing’s next ‘Saint’, George Jupp, returns to action on Saturday 9th May at the SSE Arena, Wembley Arena, as he closes in on a dream British title shot.

All-action Jupp, the Southern Area Super-Featherweight Champion, will feature in an eight-round contest against Barrington Brown in his Queensberry Promotions debut.

The 24-year-old from Belvedere, South East London, has a record of 11 wins from 13 fights, two points losses with four knockouts and in his last fight defeated Craig Poxton to claim the title.

“Winning my first title was a great boost in my career and my first step on the championship title ladder, but I want to go all the way to the top,” Said Jupp.

“My short term goal is to keep working towards a British title shot and pick up other titles on the way. My dream is to win outright the Lonsdale belt and make it my own property which I hope I can do in my career. The World title is a way off yet, I want to make sure I do the business domestically and clean up on these shores before going onto the world stage,”

“I’m in a division with some top quality fighters, Liam Walsh is top of the tree at the moment with the British and Commonwealth belts, Gary Sykes and Stephen Smith are in there, Mitchell Smith is moving down to featherweight, but with Andy Townsend and Femi Fehintola facing off for the Vacant English title next month, I’m confident in facing the winner out of that next, whoever it is, and beating them,”

“While I haven’t had an outstanding amateur career, I’ve had to take risks early in my pro career to progress and move forward, but it’s held me in good stead and given me the kind of experience that maybe some good amateur kids turning over wouldn’t have got,”

“It’s fantastic that I’m now under the Queensberry Promotions banner and I’m looking forward to making my debut for them on BoxNation and showing just what I can do. I’ve seen Barrington Brown before, he’s a slippery fighter, but I aim to cut him down, get to work on him and make sure I come out looking good to claim his scalp.”