Donald Trump will be among the 20,000 capacity crowd at the new T-Mobile Arena in Las Vegas tonight to witness the ultra-fascinating mega-fight between a Mexican and a Muslim, two factions which he is outrageously on record as saying he would ban from the United States should he, as the confirmed Republican candidate, win the American presidency in November. 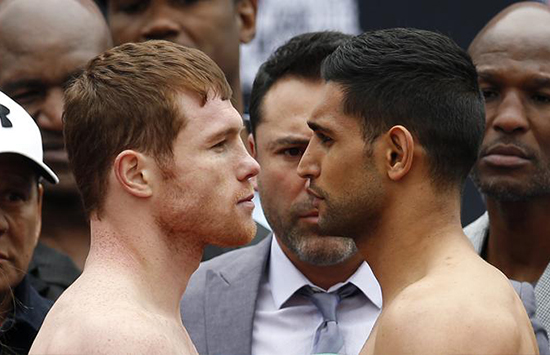 The hotly anticipated WBC middleweight championship sees Amir Khan, a Muslim, albeit a non-proselteltyzing one, leapfrogging two weight divisions to courageously pit his flashing fists against Mexico’s merchant of menace, defending champion Saul ‘Canelo’Alvarez, one of the hardest men in the hurt business.

It is a collision of skill and power from which even a fight fan like the abominable Trump, who said in the course of his election campaign that he plans to build a wall along the Mexican-American border and has previously called for a “total and complete” ban on Muslims entering the US, can‘t keep away.

Which leaves Khan to joke: “You never know – this could be the last fight in America for me and Canelo if Donald Trump becomes president!”

Like thousands of others this side of the water I will be staying awake to switch on to BoxNation’s exclusive live transmission of this catchweight classic, hoping King Khan can produce a performance to Trump an Ace, so to speak, in the casino citadel, causing the sort of fistic tsunami that will set fight folk talking about it for years to come.

We know only too well that 29-year-old Khan has taken a massive risk, and pay day to match, to face the heavy punching middleweight whose Canelo nickname is Spanish for cinnamon, the flame-like colour of his hair. The 25-year-old Alvarez has lost just one of his 48 fights, to Floyd Mayweather, winning 32 by knockout.

Bolton-born Khan, ex light-welter champ who has lost three of his 34 fights, admits he does not have the power to beat Alvarez, but is determined to use his speed and skill to outwit the man who is likely to outweigh him by ten pounds or so when the first bell clangs.

“I’m going to hit Canelo and he’s probably not going to feel it, but skill is going to win it,” says Khan. “I don’t want to be involved in exchanges, standing in front of him giving him free shots. I know he can hurt me with one big shot.

“So I have to make sure I’m balanced when I’m throwing my own shots. It’s all about being disciplined and sticking to the game-plan for 12 rounds.

“Before, I’ve not respected guys who have knocked me down or out. This fight I know I can be hurt so I’ll be on the edge and my defences will be sharper.

”Look, Canelo is a great champion, in his prime, very skilled and I will need to be at my very best to beat him. In most people’s eyes I’m seen as the underdog for this fight but I know deep down that I can win it.”

It is typically ballsy fighting talk from Britain’s youngest-ever Olympic boxing medalist but he will require all the gumption and resourcefulness which earned him that silver as GB’s lone ring ranger 12 years ago if he he is to do a Muhammad Ali and ‘shake up the world.

Some good judges I know in boxing – including BoxNation’s astute former world super-featherweight champion Barry Jones- see thjis as a kamikaze mission for Khan and that Canelo will be bidding him buenas noches inside a couple of rounds.

Maybe. Or maybe not. Khan can’t rough him up but he he can razzle-dazzle the Latino matinee idol from Guadalajara, providing that a year’s absence after the relatively indifferent victory over Chris Algieriri hasn’t rusted up those leg muscles.

Because then hastily hulked-up Khan’s, best – and perhaps only – game plan is to hit and hop it. Fast.

If he does, while I can’t envisage him winning it on Mexico’s big festival day in front of a substantially intimidating Hispanic audience, I do believe he can take Canelo then distance.

Alvarez has been built up as something of an ogre yet his record suggests that if an opponent is wily enough he can survive the inevitable systematic two-fisted slugging.

If Matthew Hatton can go 12 rounds with Canelo, surely so can Khan.

At least, you’d reckon so.. But you have to factor in Khan’s sometimes foolhardy fortitude .This time he must to let his head rule his heart.

And watch for a surprised tactical ploy from Khan – sustained spells of switch-hitting.

I understand he has been turning southpaw in some training sessions under Virgil Hunter in San Francisco, aware that Canelo has little liking for lefties.

Three fights back, also in Las Vegas, in July 2014, Alvarez was surprisingly taken to a split decision by the Cuban southpaw Erislandy Lara, on what for him was an uncharacteristically uncomfortable night. 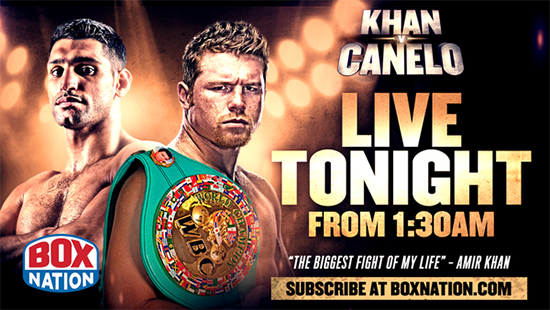 Alvarez certainly had problems getting to grips with the slick Cuban.

If Khan can keep on the move, discipline himself, keep his guard up and those fragile whiskers out of harm’s way, and still has sufficient stamina in the championship rounds, this intriguing blockbuster could go to a decision, albeit one I believe will be in the Mexican’s favour.

Khan v Canelo is exclusively live on BoxNation from 1.30 am Sunday morning. Go to boxnation.com to subscribe.