Khan at the crossroads as boxing returns to reality

Hype, hype hooray! That billion dollar bunfight in Las Vegas is over so now Sin City – and boxing can get on with the real fighting.

This will happen at the same T-Mobile Arena on Saturday fortnight when the sport’s two finest middleweights, Gennady (Triple G) Golovkin and Saul (Canelo) Alvarez put their collective multitude of world title belts up for grabs.

Kazakhstan clouter Golovkin (37-0, 33 KOs), WBC/WBA/IBF/IBO kingpin, a middleweight champion since 2010, is in intense training for his 19th consecutive title defence – one short of the all-time record – against lineal and Ring Magazine middleweight champion and Mexican icon Alvarez (49-1-1, 34 KOs).  It is is the long-anticipated showdown to determine supremacy of the middleweight division and arguably the pound-for-pound rankings.

So now we can finally allow Floyd Mayweather jnr, richer by some zillion dollars, to ride off into the Nevada desert sunset on the back of Rocky Marciano’s broken record – and his Irish jig dancing partner Conor McGregor to return to the MMA’s less disciplined – and demanding – octagon.

As I saw it, Mayweather obviously forfeited the first couple of rounds to make it seem more of fight than it actually was: A mismatch mix-match. He could have won whenever he wished, instead of leaving it until Round Ten.

But that’s showbiz for you.

McGregor had balls but neither the stamina nor a big punch that could cause the 40-year-old who calls himself The Best Ever to break sweat.

Mayweather won exactly when and how he wanted. And in doing so at least gave the punters and pay-per-viewers something approaching what they deserved to see. A masterclass in strategic domination.

Now for some trumpet-blowiNg.This is what I wrote here last week before the plot unfolded.

‘All Mayweather really needs to do to make it a record-busting 50-0 is backfoot it behind the jab for as long as he wishes or until McGregor runs out of gas and ambition in trying to nail the most elusive practitioner modern boxing has known and is saved from total humiliation by the intervention of Nevada State-appointed referee Robert Byrd.’

I rest my case.

It was not so much a fight, more a foregone conclusion.

Anyone without a vested interest or with half a brain could see that Mayweather showed up McGregor to be the absolute novice he is under Queensberry Rules.

But he did it craftily and professionally because he did not want this enigmatic extravaganza to appear a total farce.

Which it could have been had Mayweather elected to turn up the heat after the first two or three rounds.

Yes, McGregor was brave, but who wouldn’t be for the thick end of a couple of million or more?

I was reminded of the memorable occasion when Muhammad Ali, pitted against a hopelessly inadequate opponent, leaned over the ropes to beseech a TV producer: ”You’d better get those commercials in quick. I can’t hold this sucker up any longer”

We have come to expect the pom-pom waving from Sky

Sports’ commentary boxers but it was sad see even the usually excellent Sky News channel report McGregor’ s obviously assisted survival for ten and a bit rounds as one of the greatest achievements in the annals of sport.

Actually, I was reminded of the memorable occasion when Muhammad Ali, pitted against a hopelessly inadequate opponent, leaned over th’e ropes between rounds to beseech a TV producer: ‘You’d better get those commercials in quick. I can’t hold this sucker up any longer.”

Afterwards Mayweather quipped that he chose the right dance partner for his last waltz. Unfortunately the man from UFC couldn’t tell a waltz from a tango as far as proper boxing was concerned, though he did his best. 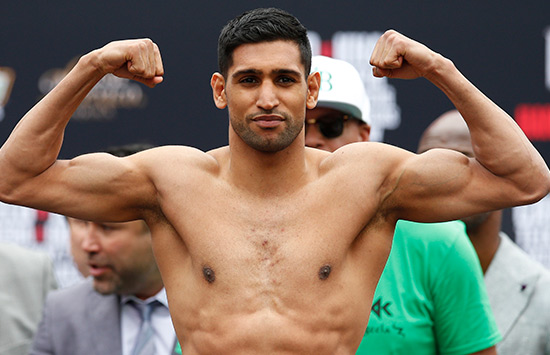 The truth is there isn’t a half-decent welterweight boxer in the world who wouldn’t beat McGregor in a legitimate fist fight. Which is so many of them are queuing up to try and persuade him to engage with them for a few million bucks – among them Britain’s Amir Khan.

On the 13th anniversary of him returning home to Bolton in triumph after winning an historic silver medal at 17 as Britain’s lone ring ranger atthe Athens Olympics ‘King’ Khan is now at the crossroads of his chequered professional career, having won and lost world titles- as well as his missus -and been in the tabloid headlines more than he has in the ring of late.

Sadly, he now 30-year-old Khan seems to have his finger firmly on the self- destruct button and, as a result, has dropped off the radar.

Last seen he was in Vegas along with countless other celebs for Saturday’s production number.

The former two-time world welterweight champ hasn’t fought for 15 months since that horrific knockout defeat against Canelo in Las Vegas.

In fact, he has had just two fights in the last three years, which means his name has been dropped from the top-15 rankings by all four of the world championship bodies.

Long periods of inactivity usually play havoc with fighters and do nothing for their well-being. It badly affects their speed and reflexes and often leads to the softening of mind and body.

Khan is making matters far worse for himself. According to The Sun since the bitter break-up of his four-year marriage to beautiful American wife Farayal Makhdoom he seems have been spending more time bars and nightclubs than the gym. And now an expensive divorce is pending.

He has also fallen out with his once-close family big-time.

Some time ago I asked one of his now discarded entourage what had happened to the boy from Bolton who won over the nation with his innocence, charm and considerable skills. ”He has discovered his d***” came the reply.

Now a former friend is quoted as saying: “He is still a lovely guy but loves partying hard, drinking, smoking sheesha and going out with beautiful women.”

That sounds rather like Mike Tyson, who was never the same once he discovered the delights of the vine and the flesh.

And like the rest of the boxing world he should tune in to watch how those perfectionist pros Golovkin and Alvarez go about the real business of boxing on 16 September, a night when Billy Joe Saunders flexes his own middleweight muscles, now impressively re-tuned under the expert tutelage of Dominic Ingle,, against Willie Monroe jnr at London’s Copperbox .

Thankfully with this lick-lipping BoxNation double header boxing is returning to reality.