Best of British, Terry Flanagan and Liam Smith, spanked the Yanks at the Manchester Arena in their world title fights with Flanagan retaining his title and Smith being crowned new world champion.

Manchester ace Flanagan destroyed his mandatory challenger Diego Magdaleno inside two round in the first defence of his WBO World Lightweight title, while Liverpool star Smith smashed John Thompson in 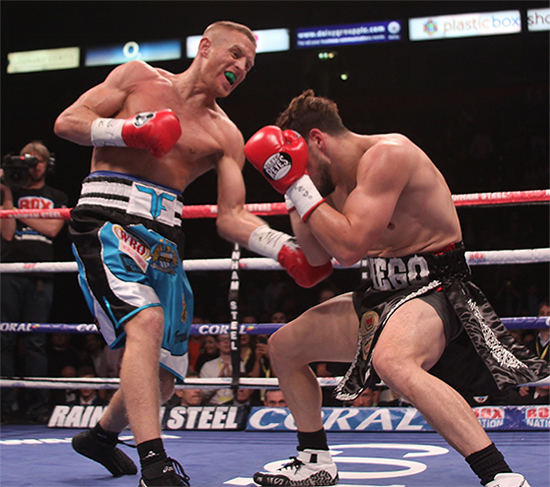 It was vindication for Flanagan who won the vacant title in July against Jose Zepeda, but a only after the American dislocated his shoulder in the second round.  Flanagan was on a mission to prove that he is the real deal and he caused huge eruptions in the boxing world with his performance over Magdaleno.

The 26-year-old southpaw floored Magdaleno with a barrage of powerful hooks and crosses three times before the referee called a halt to the action in the second round at 2:30, leaving Magdaleno looking like he’d been hit by a hurricane.

Flanagan sent a firm message out to his domestic rivals Derry Mathews and Anthony Crolla that he’s the best man in Britain at 135lb and a message to the world that he is also the leading fighter in the division.

He said afterwards, “That was a cracking performance, I was really pleased with that, maybe I could have done him a bit quicker, but I’m right happy with that.”

“Now people will start standing up and taking notice of me and know that I’m the real thing.  Anyone who knows me knows that I’ll fight anyone, anytime.

“I love boxing and I’m in to prove that I’m the best in the world.  I’ve done two of the top Americans in a row now, the more the merrier.

“I want to defend my title again and then look at unification fights to show just how good I can really be.”

For Smith, 27, he became the first of the famous talented brothers to win a world title when he knocked out Thompson inside seven rounds.

‘Beefy’ took the first couple of rounds to solve the slick, fast punching Thompson, but once he started getting his distance in from the third round with his jab and landing his big overhand right the American was on the backfoot.

With Thompson starting to tire, Smith’s punches were snapping Thompson’s head back and Smith knew that the end was coming soon and in the sixth it looked like it was going to be stopped as Smith landed some huge shots before the end of the round sounded.

In the seventh Smith piled on the pressure and dropped Thompson with a massive right and the New Jersey fighter went down heavy. He tried to rise but then slumped back down again with the referee waving it off. 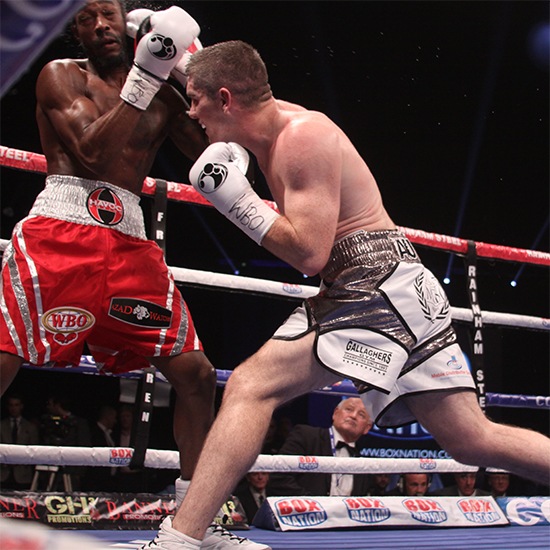 Smith went wild in celebration realising he had achieve his dream of finally becoming world champion.

He said, “It’s an unbelievable feeling and it hasn’t sunk in yet, but it means the world to me,”

“It’s the only belt we’re missing in the family and I’m over the moon to be the first to bring it home and hopefully it will be the first of many world titles,”

“It took me a couple of rounds to settle in, he started fast and flashy and was moving well, but I knew he couldn’t keep that pace, and when my punches started to rock his head and when I hurt his body, I knew it wasn’t going long,”

“I’m now in the elite of the 154 pound division and the other Americans can start calling me out now.

“I’ll fight anyone, the division is packed with names Charlo, Lara, Alvarez, but I’ve arrived now and they can chase me.”

Promoter Frank Warren was thrilled with both their performances and is predicting an exciting time ahead.

He said, “I thought Terry was phenomenal and for me that was the most outstanding performance by a British fighter in the last two years,”

“He absolutely annihilated Magdaleno, who was his mandatory challenger, in such a devastating manner. He lived up to his nickname Turbo and went straight through him,”

“I’ve had many great nights with Ricky Hatton at the Manchester Arena and there are going to be many more ahead with Terry, I’m really excited with the future,”

“Liam was absolutely sensational and it was a fabulous performance by him to win the world title in such a conclusive fashion by knocking out Thompson,”

“He really made the boxing world sit up with that performance and there are some cracking big fights to be made with him,”

“Both fights went out live on TV in America and they can’t of failed to have been impressed.  We’ve got two great British World champions in Terry and Liam who are going to go on and achieve more great things.”

FULL RESULTS FROM THE MANCHESTER ARENA

BENTLEY BACK IN YORK HALL CRACKER