THE WBO INTERCONTINENTAL MIDDLEWEIGHT CHAMPIONSHIP
TOMMY LANGFORD W PTS 10 (100-90, 100-90, 100-91) CRISTIAN FABIAN RIOS
Tommy Langford was made to work for his 14th straight win by tough Argentine southpaw Christian Fabian Rios.
Langford took early charge, but ended the fourth on the back foot and Rios made the rest of the fight harder for him.
The Midlander won the rounds by being busier and sharper, but every now and then, Rios counter attacked and dug in body punches that forced Langford to back up and regroup.
The Argentine, who’s never been stopped in his 30-fight career, deserved his ovation at the final bell. 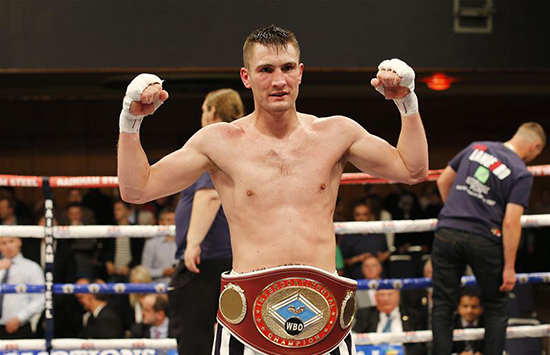 ELIMINATOR FOR THE ENGLISH SUPER-WELTERWEIGHT CHAMPIONSHIP
RYAN ASTON WTKO4 NATHAN GRAHAM
The opening couple of rounds were close, then Aston took charge.
He started to impose himself on Graham in the third and early in the next, Aston buzzed him with a southpaw left – and went for the finish. He drove Graham into a corner and unloaded a barrage of punches that forced referee Terry O’Connor to step in. Graham protested, but he was under fire and throwing nothing back.

8 X 3 MINUTE ROUNDS LIGHT-WELTERWEIGHT CONTEST
JOSH LEATHER WRSC4 MICHAEL MOONEY
Mooney was stopped for just the third time in his pro career by Leather, who improves to 8-0.
Mooney always comes to fight, but struggled to get near Leather and in the fourth, the Worcester warhorse missed with a left hook and was dropped by a pinpoint right-hand blast to the jaw.
Game as ever, Mooney picked himself up, but Leather pinned him on the ropes and kept the punches coming until referee Kevin Parker stopped the fight.

6 X 3 MINUTE ROUNDS INTERNATIONAL MIDDLEWEIGHT CONTEST
ANDY ROBINSON WPTS6 DEIVIDAS SAJAUKA
Bravest boxer on show was Sajauka.
For six rounds, Robinson, the Midlands Area super-middleweight champion now looking to campaign at 11st 6lbs, hit the Lithuanian with hard, clean punches, but couldn’t put him away.
Robinson, never in a dull fight, may have broken Sajauka’s nose in the third with a left uppercut.

6 X 3 MINUTE ROUNDS SUPER-WELTERWEIGHT CONTEST
MACAULAY MCGOWAN WPTS6 KEVIN McCAULEY
McGowan, trained by Anthony Farnell, took a couple of rounds to settle into the fight, then took away McCauley’s ambition with body shots and pulled away to win 60-54 on referee Kevin Parker’s card.
McGowan is now 8-0.

4 X 3 MINUTE ROUNDS INTERNATIONAL SUPER-FEATHERWEIGHT CONTEST
LEON WOODSTOCK WTKO1 IGNAC KASSAI
The Leicester banger is now 4-0 (3) after blowing away Ignac Kassai in just two minutes.
Woodstock sent Kassai tumbling for a count of ‘eight’ with a body shot and had the Hungarian southpaw on the floor twice more before referee Terry O’Connor waved it off.

4 X 3 MINUTE ROUNDS LIGHTWEIGHT CONTEST
LES BYFIELD WPTS4 MICHAEL STUPART
Local ticket-seller Byfield cut Stupart on his left eyebrow in the opening round, dropped him late in the second with a pinpoint long right hand – one of the best punches of the night – and went on to win 40-35 on referee Kevin Parker’s scorecard.

4 X 3 MINUTE ROUNDS MIDDLEWEIGHT CONTEST
TYLER DENNY WPTS4 JAMES CONROY
Denny, a powerfully built southpaw from Rowley Regis, is now 3-0 and looks to be improving.
He switched his attacks from body to head and had Conroy on the floor late in the second.
The bell came to his rescue and Denny went on to run out a 40-35 points winner.

4 X 3 MINUTE ROUNDS FLYWEIGHT CONTEST
JOSH MILLER WPTS4 IAIN JACKSON
There were no debut nerves from Miller, who let his hands go from the bell and kept Jackson under pressure throughout to win every round on the referee’s scorecard.