LANGFORD: “RICHARDS HASN’T FOUGHT ANYBODY – THIS IS A BIG STEP UP FOR HIM!” 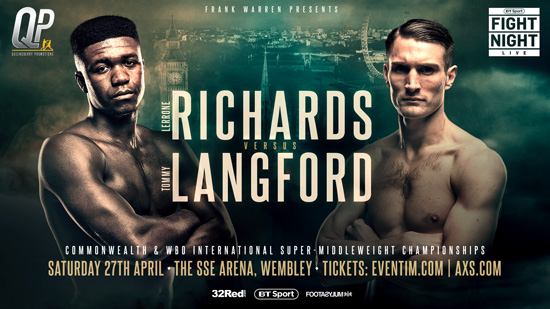 TOMMY LANGFORD BELIEVES his Wembley opponent Lerrone Richards has got it all to prove when the pair collide with the vacant Commonwealth super middleweight title at stake at the SSE Arena on April 27.

Former British middleweight champion Langford is on the rebuild, having moved up in weight after twice being deemed to have come up short on the cards in two epic title battles with Jason Welborn.

His only other setback came when he challenged for the WBO Interim world middleweight title against Avtandil Khurtsidze, who was later imprisoned for organised criminal activity in New York.

The 29-year-old, who took up a day job as an adult trainee electrician when remaining a full-time athlete was no long viable, is now thrilled to be back in the title picture after suspecting he wouldn’t fit the bill as an ideal opponent.

He was wrong on that score and Commonwealth success would near enough restore his previous standing at the higher weight.

“Of course it does and I really didn’t think an opportunity would come this fast for me, having moved up in weight,” he confessed.” I thought I would kind of be kept out in the dark for quite a while because I don’t see that anybody would really pick me as an opponent.

Even in the fights I lost – and I really don’t believe I lost to Jason Welborn, they were fights of the year – he had the fight of his life, while the one that knocked me out was a juiced up little Georgian anyway.

“Obviously I have been thrown this chance and it is an absolutely huge opportunity and I am really grateful to Frank and Francis (Warren) for giving it to me.”
While Langford doesn’t consider himself anyone’s first pick on the matchmaker’s menu, much the same could be said for Richards, for whom very few have been prepared to form an orderly queue to face.

“I seem to keep getting people like this that people don’t really want to fight and I say yes,” pointed out the Tom Chaney-trained Langford. “I don’t know what the crack is with Lerrone, who I have sparred and he is a very slick southpaw, but he has not really fought anybody.

“Is that through not wanting the fights or more that nobody wants to fight him?

“It is a big, big step up for him and we’ll find out what he’s really got,” added the former WBO Intercontinental champion, who does concede that Richards could well be a fully paid up member of the ‘who needs him’ club.

“He is really, isn’t he? He is an awkward southpaw, not a big ticket seller, hasn’t been knocking people out and is not particularly exciting for TV viewers. So who really wants to fight Lerrone?

“You don’t think ‘I’ll pick him’, but he is a very good operator and I wouldn’t be daft and say he isn’t. But there is a difference between the sparring arena and the fight arena and he’s not fought at championship level or remotely near the level I have fought at.”