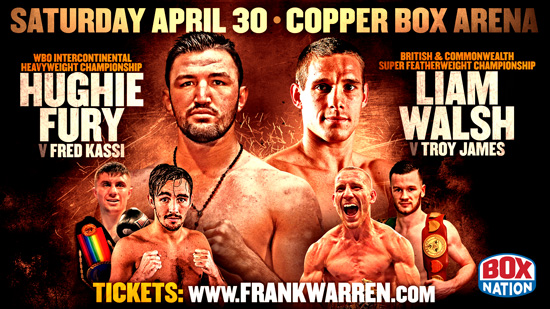 Ricky Hatton-trained heavyweight prospect Nathan Gorman announced himself on the professional stage with a first round stoppage win over Croatia’s Hrvoje Kisicek. The Mancunian mountain had his opponent down three times in the opening round before the referee waved off the contest at 2 minutes 48 seconds.

Erith man Lewis Pettitt made light work of Hungary’s Tibor Nodari in the third contest of the night. Pettitt was on top from the very first bell and dominated the ring throughout. The referee waved off the fight at 1:42 into round two and the former WBA International Champion came away with his nineteenth career win.

Naseem Hamed prodigy Tony Bange was made to work for his first professional victory and survived an early onslaught from all-action Teodor Stefanov. Bange found his feet in the third round after a nervy start to life as a pro. The Staines welterweight prospect summoned his explosive ‘TNT’ power midway through the third and has his opponent hanging on. 25 year-old Bange came steaming out his corner in the fourth and final round looking for a big finish. New boy Bange took the bout with a score of 39-36.

Enfield youngster Barney Joe Jones suffered his first professional defeat at the hands of Nottingham’s Dean Gillen. In the first barn-burner of the night Gillen came away with a points victory of 39-37. Both men put their all into an explosive slugfest.

24-year old Hornchurch debutant Sanjeev Sahota made a sensational start to life in the paid ranks with a first round stoppage over Latvia’s Nikita Gultjajevs. It took ‘SSS’ just 60 seconds to dispose of Gultjajevs after landing a series of punishing combinations.
VIJENDER SINGH WTKO5 (1:52) VS. MATIOUZE ROYER

India’s golden boxing boy Vijender Singh continued his march towards a huge summer homecoming with a punishing stoppage win over Frenchman Matiouze Royer. Singh wasted no time and had his opponent on the back foot from the off, finding his way past Royer’s defence with accurate uppercuts.

Afterwards Vijender said: “We had a solid game plan and I stuck to it perfectly. Royer is a tough opponent and made it difficult for me at times but he couldn’t handle my power and accuracy. I felt in complete control throughout the fight and it’s a shame the ref waved it off, I wanted more!

“It felt like everything I was throwing was connecting. I’m feeling stronger with every fight and want to carry on this momentum. I’ve got a huge Indian homecoming to look forward to this summer so it’s vital I get past my next opponent in Bolton.”

Francis Warren, Singh’s promoter, said: “I’m very impressed with Vijinder tonight. He’s showed everyone what he’s capable of and I’m excited for his future. He’s completely dedicated to his training and it showed tonight. He looked levels above Royer, who’s rarely stopped. Everything is shaping up nicely for his July 16th homecoming, all he needs to do now is get past his May 13th bout in Bolton.”

19 year-old Super-Featherweight puncher Boy Jones Jnr picked up his eighth career win with a classy stoppage over Hungary’s Aron Sziagyi. Boy Jones unleashed a relentless barrage of powerful shots on the retreating Sziagyi who was pulled out of the contest by the referee two minutes into the fourth round.

Unbeaten power-punching 22 year-old Joe Pigford blew away Warwick’s Mike Byles inside three minutes to pick up his tenth pro victory. Pigford has been out of the ring since July last year but showed no signs of ring rust in an impressive first round blitz. The Southampton super-welterweight man brought home the bacon, much to the delight of his noisy travelling supporters.

Sidcup’s D.P Carr overcame Sheffield’s Qasim Hussein to claim his fourth professional victory at Stratford’s Copper Box Arena. 25 year-old Carr was on top throughout the contest and came away with a comfortable points victory. All-action Carr repeatedly found his way past Hussain’s patchy defence and made use of his explosive one punch power. The referee scored the bout 40-36 on Carr’s favour.

Ilford light-heavyweight destroyer Anthony Yarde racked-up another brutal knockout win over Bulgaria’s Tzvetozar Iliev tonight at the Copper Box Arena. It’s now five knockout wins in six professional fights for the slick and powerful 24 year-old. A huge uppercut in the second round wobbled Iliev before Yarde sent his man crashing to the canvas with another solid shot.