The last time England and Ireland met in the the boxing ring with a World middleweight title on the line was 21 years ago when Steve Collins and Chris Pyatt clashed, now the two nations reignite their rivalry with the potential thriller between Billy Joe Saunders and Andy Lee on Saturday 19th December at the Manchester Arena.

Leicester puncher Pyatt, then the reigning WBO World Champion, lost the title to Dublin hardman Collins, who himself previously lost in two world title attempts, on a fifth round stoppage to finally achieve his dream of becoming World champion on 11th May 1994 at Sheffield’s Ponds Forge Arena. 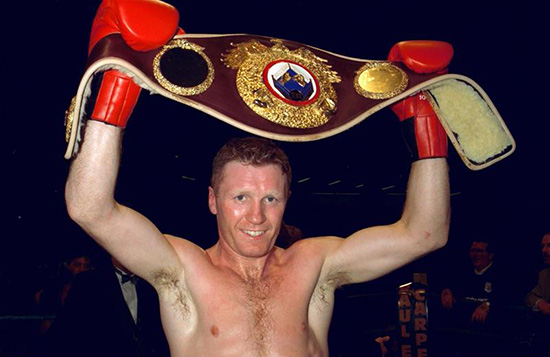 The same belt will be on the line, now held by Limerick’s dynamite punching Lee, when he makes the first defence of the belt against his mandatory and undefeated challenger from Hatfield, in one of the most important fights in the 160lb division in recent years.

Straight after the Pyatt victory, Collins moved up to super-middleweight and defeated rival Chris Eubank, twice in a row, followed later by back-to-back victories over the Dark Destroyer Nigel Benn in epic encounters before retiring as undefeated world champion in July 1997.

Collins believes the winner of Lee and Saunders can go on to huge blockbuster fights in the division that holds stellar fighters Gennady Golovkin, Miguel Cotto and Saul Alvarez, plus Daniel Jacobs and Peter Quillin, who’s fights all feature exclusively live on BoxNation.

“When I beat Chris Pyatt to become WBO World Middleweight champion it was like a key to the super fights, to the Eubanks and Benns, which made my name, but that fight against Pyatt was absolutely crucial for me to win otherwise those big fights wouldn’t have happened,” Said Collins.

“It was a dream come true when I beat Pyatt, who was a great fighter in his own right, and I knew that I had to KO him to win, he was a tough man, but for me he was the ticket to the big fights.  If I’d have lost he’d have gone and fought Eubank and Benn and I’d have been out of the picture.   That’s pretty much how Lee and Saunders can look at it, it opens up even more big fights for the winner,”

“Saunders and Lee have got everything to fight for, there are some massive fights ahead for them.  Obviously Golovkin is king right now and we haven’t seen the likes of him for a long long time, he’s the best right now.  There are great fighters like Cotto and Alvarez, so the winner out of Lee and Saunders is going to have a field day.  Back in my day there was Benn and Eubank who I beat twice each, but it created a great rivalry, the only one who didn’t get involved was Roy Jones Jnr. who stayed his side of the pond,”

“The current 160lb division is a very exciting place and it’s one of the best in boxing right now.  This fight It’s like going back to the good old days in the division.  It has the potential to be a great, great, fight.  Both men have the ability to win.  If it goes the distance Saunders can win, but Lee can win by stoppage.  Whatever, it’s going to be exciting.”