LEE CAN END SAUNDERS FIGHT WITH ONE PUNCH

“He’s not good enough to beat me” 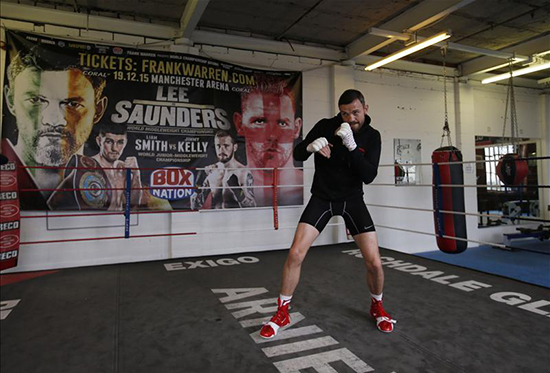 WBO World Middleweight Champion Andy Lee has told challenger Billy Joe Saunders he has the punch to end his dreams.

Lee defends his title against Saunders this Saturday night (19th December) at the Manchester Arena, exclusively live on BoxNation, in the mouthwatering showdown that has got divided the fight trade.

The Limerick southpaw went through an open training session this morning in Manchester and showed the media a sample of his one-punch power.

With 24 KO’s in 34 wins, Lee is looking to inflict the first loss to Saunders’ unbeaten record and says that the Hatfield star is not good enough to beat him.

Lee stated, “I have a punch that can end a fight, lights out in any given second,”

“I won’t rely on the punch, I will look to dominate from the start with educated pressure,”

“Saunders’ unbeaten record is a disadvantage, he’s always been in fights he’s expected to win and has been well managed by Warren,”

“I’ve never lost a fight on points and I never will on points, if I’m down on the cards I will go out swinging in the last round,”

“Saunders being a fellow traveler does add another layer, but at the end the day it’s about how good you are and he’s not good enough to beat me.”

Remaining tickets for Lee v Saunders priced from £40 are available from frankwarren.com, ticketmaster.co.uk, eventim.co.uk and manchester-arena.co.uk or watch exclusively live on BoxNation. Go to boxnaion.com to subscribe.