Billy Joe Saunders has goaded Andy Lee ahead of their world title fight saying the Irishman knows about losing unlike him. 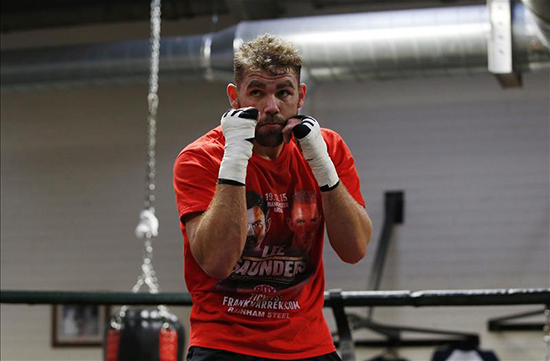 The undefeated Hatfield middleweight challenges for Lee’s WBO world title belt, exclusively live on BoxNation, from the Manchester Arena this Saturday night, and says he will have the mental edge when the pair finally clash.

26-year-old Saunders was in relaxed mood as he worked out for the media earlier today and is extremely confident ahead of his first world title attempt.

“I believe I have the advantage going into this fight knowing that I’ve never been beaten before,” said Saunders.

“It definitely gives you confidence knowing that you have overcome everyone you’ve ever faced and I think it does have an affect on you when you lose.

“Some fighters say that losing doesn’t play a part but it has to because you go into a fight weaker mentally and sometimes physically.

“Lee has lost before and I’m going to use that to my advantage. I think he’s a very good fighter but I’m younger and fresher and know I have the skills to beat him,” he said.

Some believe Saunders is the better pure boxer out of the two with Lee carrying the power, but the Commonwealth champion is unconcerned about the Limerick man’s renowned knockout prowess.

“His power doesn’t concern me,” said Saunders. “I know he has a big reputation for knocking guys out but I’m not going to be one of them. In fact, I think he has to be concerned about my punching power because it’s something that we’ve been working on.

“This fight is going to be very fan-friendly because of our two styles and it’s going to be electric when we get into the ring.”

With a record of 22-0, with 12 KO’s, Saunders turned professional at 18 after qualifying for the Beijing Olympics in 2008.

He now stands on the cusp of achieving a childhood dream of becoming world champion and is adamant he will not fall at the final hurdle.

“I’ve worked too hard and too long for this to let it slip me by. I’m ready for whatever is thrown at me on Saturday and will go through anything and everything to become champion,” said Saunders.

“My camp for this fight has been one of the best and most disciplined of my career and my only focus has been on getting my hand raised at the end of the fight – that’s all I’ve been picturing.

“Winning a world title is never easy so I’ve sacrificed everything to get into the shape I am today and come fight night you’re going to see why I’m one of the best middleweights in the world,” he said.

Remaining tickets for Lee v Saunders priced are available from frankwarren.com, ticketmaster.co.uk, eventim.co.uk and manchester-arena.co.uk or watch exclusively live on BoxNation. Go to boxnaion.com to subscribe.