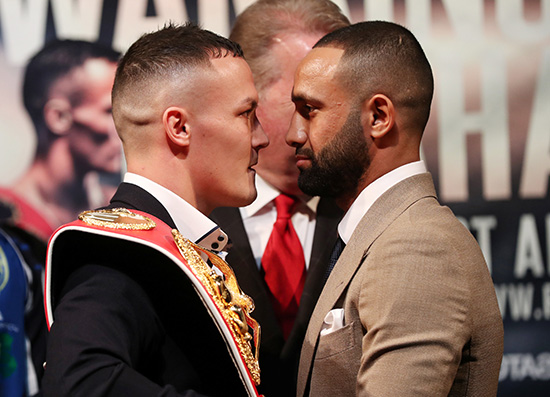 WE ARE NOW counting down the days to what will be a truly special card in Leeds on June 15 topped by Josh Warrington making a second and mandatory defence of his IBF featherweight title against Kid Galahad at the FD Arena.

It is a fantastic show we have got to look forward to and one that really can’t fail to deliver for the fans when you consider the world title showdown is backed up by two high quality Commonwealth title clashes between top domestic fighters in Zelfa Barrett–Lyon Woodstock and JJ Metcalf-Jason Welborn.

The hordes of Leeds fans inside the arena and those tuning in with great expectations to BT Sport are in for a treat.

To offer up a few early thoughts on the headliner, I found it interesting to hear Kid Galahad say that I know – along with Josh’s dad Sean – that he is all wrong for our man and we didn’t want the fight.

He is right in one respect in that it wasn’t the fight we wanted for Josh because he is intent on unifying the division. However, we have had a mandatory put on us so we will make the best of it and put on a great show for the fans.

I really haven’t got reservations over the fight when it comes to fearing a setback for Josh, although I know he is not going to come and roll over.

On the subject of styles, I think Josh’s style is more wrong for him. It was wrong for Lee Selby and wrong for Carl Frampton – and they are much better fighters than Kid Galahad.

Our only hesitancy over booking up this fight was down to the fact we were hatching alternative plans.

It was a bit frustrating because we were quite close to doing the Oscar Valdez fight and that was where Josh and ourselves wanted to be. It was a good fight for him and a winnable one.

Now we’ve got this one and we’ve got to get on with it. As mandatory defences go, this one is pretty juicy and the fact we’ve got a Yorkshire derby spices it up significantly.

None of us underestimate Kid Galahad. He is undefeated and has won an eliminator to get here as well, so we have got a fight on our hands.

I think it will be entertaining, mostly because I don’t think you will see Josh in anything other than enthralling encounters. It is the way he fights. As soon as that bell goes he is off, he’s got a great work rate and throws a huge volume of punches.

He just comes to fight and anyone who gets in there has got to try and fight with him. It is no good keep backing off and thinking you’re going to pick him off as he comes in because he can do both.

Josh, as always, will take big inspiration from the vocal backing of his home support and that is something Galahad is going to have to contend with. The bottom line is it is going to be hostile territory he is stepping into and whether he will be able to shrug off the atmosphere as he claims he will.

The interesting subplot to all this is that Carl Frampton looks like he will be in position to get to Valdez ahead of Josh. Our own forward planning was hampered to the hand injury that held up this fight, otherwise Josh could well have been training for a Valdez fight now.

Maybe out of bad will come good and if he comes through against Galahad and Carl has his warm-up and then beats Valdez, what a great return match that would be.

Fingers crossed for that one.