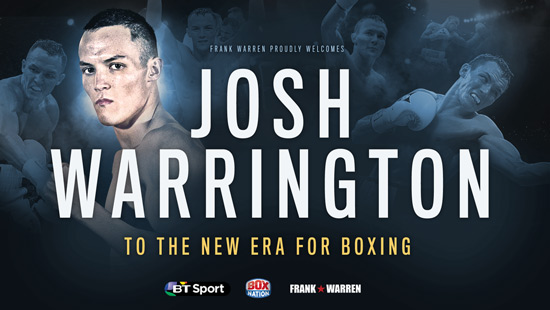 Hall of Fame promoter Frank Warren is delighted to have signed a long-term promotional deal with Leeds hero Josh Warrington. The undefeated Featherweight sensation (24-0, 5 KOs) is confident he can secure a World title as he embarks on the next stage of his career with Warren.

Yorkshire star Warrington is aiming to continue building a fortress in his hometown on his journey to World honours. 26-year-old Warrington is already the flag-bearer for boxing in his city but now wants to cement his place as one of British boxings’ biggest stars by mixing it with the world’s best.

“My original dream was to win a British title at the First Direct Arena and now we’ve gone beyond that and won European and International titles,” said Warrington. “All I want to do now is win a World title and I’ll do anything it takes to do that. I kill myself in the gym every time I fight and I’m determined to make my dream a reality.

“Every fight I have is a World title fight to me and the ultimate goal is to bring a World title back to Leeds and become the first World Champion from the city. The buzz around the city is crazy at the moment, they’re craving for a World Champion. I have little old ladies stop me in the street and ask me when I’m going to be fighting at Elland Road.

“Fighting for World title at the home of Leeds United would be a dream come true for me. I just need to keep on winning and keep on dreaming and hopefully that will be the end product of all of my hard work.”

Josh landed his first professional title, the Vacant English Featherweight belt, in just his twelfth fight when he outpointed Chris Male over ten rounds in 2012. After two successful defences, he then stopped Hull’s Samir Mouneimne to claim the Vacant Commonwealth strap, despite being a huge underdog.

In 2014 he comprehensively outpointed Martin Lindsay to add the British crown to his Commonwealth strap in his first outing at the First Direct Arena. Five months later ‘The Leeds Warrior’ halted Italy’s David Dieli in four to pick up the Vacant EBU European Featherweight title before winning the Vacant WBC International belt with a one-sided points win over Dennis Tubieron.

Trained by Sean O’Hagan and managed by Steve Wood, Warrington is excited about what opportunities 2017 will bring and cannot wait to showcase his talents live on BT Sport and BoxNation.

“I’m looking forward to starting the next chapter of my career with Frank. It’s an exciting time to be teaming up with him and the BT Sport deal is sure to signal the dawn of a new era for boxing in the country.

“I can’t wait to showcase my talent and hard work to an even bigger audience. It’s a bit of an honour to be part of it from the beginning and hopefully I can help drive Frank’s promotions along. I have a real hardcore support that keeps on growing and growing and there’s sure to be some big nights ahead.”

Promoter Warren expressed his excitement at securing the services of the hugely popular Leeds man and believes there is every chance that he can fulfil his dream of landing a World title in the New Year.

“I’m delighted Josh is joining our team,” said Warren. “He’s the flag-bearer for boxing in Leeds and I’m looking forward to him headlining some huge shows there live on BT Sport and BoxNation.

“He has unrivalled support similar to the following Ricky Hatton built while he was with me and it’s only going to get bigger with him fighting on big shows regularly on BT Sport and BoxNation. I’m confident I can deliver him a World title shot.”

Steve Wood, manager of Warrington, said: “I’m Looking forward to Josh being part of the new boxing revolution on BT Sport and expect him to be a huge success with his unrivalled work rate and entertaining style which fits his atmospheric audience.

“Frank has made a big play for Josh and made us feel wanted which is always good. He has promised to deliver the same opportunities he has for Terry Flanagan and I cannot see anything but Josh becoming another VIP World Champion. With Frank’s support, he can become a global star, as well as filling Elland Road we want road trips to Vegas in the future.”