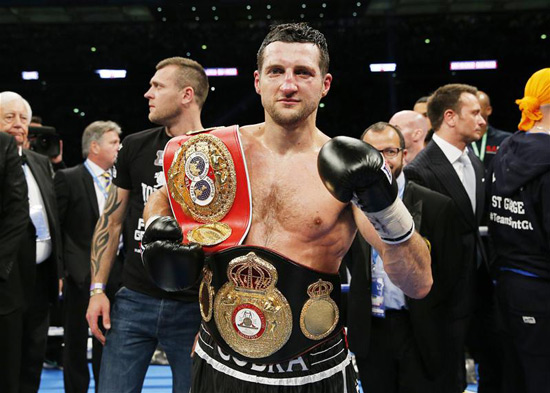 Froch, a four-time super-middleweight world champion, refuses to jump on the GGG bandwagon and has backed the undefeated Saunders to prove he is the world’s true middleweight champion.

Speaking to The Sun, the retired super-middleweight supremo said: “I’m not putting Golovkin on this pedestal that everyone has him on. Who has he beaten that Billy Joe couldn’t? His reputation is inflated. He’s obviously a very good fighter and can punch very hard but he’s a small middleweight,

“Beat somebody who is quality, beat him in style and I’ll start talking about you like you’re the next Sugar Ray Leonard or something.”

Froch added: “When I watch Golovkin, I see him getting hit with shots. He walks through them to land his but he’s wide open coming forward.”

Saunders has previously expressed his desire to take on Golovkin in a massive summer showdown at the Emirates or Wembley and is now even more determined to nail down a lucrative world title unification fight.

He said: “Since I’ve won the world title I’ve grown in confidence. Having a man of Carl Froch’s experience backing me to win has given me even more of a boost. Carl Froch was one of the best fighters about so for him to say that is something. I already know in myself that I’ve got the beating of Golovkin with the right tactics.”