Leicester power-puncher Leon Woodstock is a clinical finisher like Premier League hotshot Jamie Vardy when it comes to taking out opponents and the 22-year-old aims for another knockout when he takes on Swindon’s experienced Joe Beadon at the Liverpool Echo Arena on Saturday 13th February, exclusively live on BoxNation. 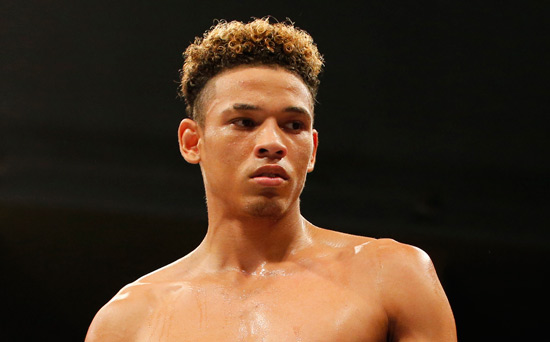 The King Power Stadium, home of Premier League high-flyers Leicester City, has witnessed some knockout performances this season and ‘The King’ will be looking to excite fight fans with some big performances of his own in 2016.

He said: “I feel like the first year was about establishing myself and letting people know who I am. I’m not big headed but I’m confident. I don’t go mouthing off in front of the cameras but I’m very sure of what I’m capable of and I’m very sure of people that I can deal with. At first I wanted to set a good example to younger lads in Leicester and established myself amongst the professional boxing ranks,”

“This year is about trying to take some bigger names and maybe a few titles along the way. I want to carry on building my reputation and letting people know I’m not here to mess about, I’m here to do the business in the ring.”

With three knockouts in his first five professional fights, Woodstock’s raw power and aggressive style have led some to draw comparisons with British legend Nigel Benn. However, the explosive Woodstock is looking to take a leaf out of Chris Eubank’s book.

He continued, “Benn is my favourite British boxer ever, his power and aggression made for a devastating combination. He came a bit unstuck when he came up against higher level fighters because he was so used to steaming through easier opponents! When it came to doing more rounds against better fighters he had to go back to the basics of boxing instead of just walking through everyone,”

“Chris Eubank on the other hand could have knocked some of his opponents out much earlier than he did but he wanted to get more rounds under his belt. I’m looking to do the same thing, if I know I can deal with someone I’ll do the rounds and if the opportunity arises to deal with them later on in the fight I’ll take them out.”

“If I feel like I have 100% control over someone, and I can do what I want with them and they’re in my back pocket I’m not going to look to just completely blow them away.”

Boxing out of the Leicester City ABC gym, Woodstock has big plans for his future in boxing and is looking to emulate the success of Claudio Ranieri’s title-chasing men.

He added, “Leicester City are flying at the moment and there’s a real buzz around the city. They’ve got every chance of winning the Premier League title and I’m going to be winning a few titles of my own. It’s a great time to be a fan of sports if you’re based in Leicester and I’m going to give my fans something to cheer about too.”