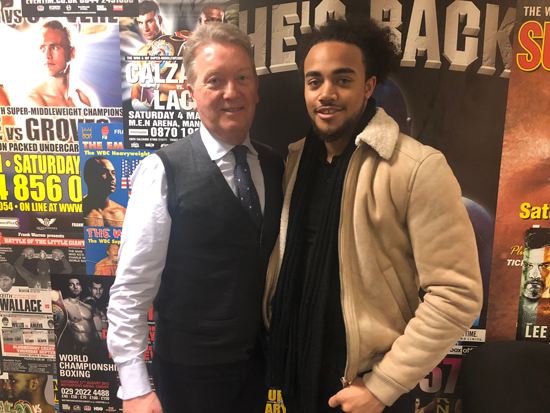 Challenger, 23, first caught the eye of Warren after his hugely-impressive first round stoppage win over the usually-durable Danny Little on the ‘City of Champions’ bill back in April 2017.

A successful amateur career saw the Leicester man win 21 of 30 bouts, picking up the Haringey Box Cup trophy at 69kg in 2016 before deciding to join the professional ranks later that year with manager Jason McClory.

Since turning over, Challenger has won all six of his contests, halting two inside the distance.

Fighting out of the Leicester Unity Boxing Gym alongside undefeated WBO European Super-Featherweight Champion Lyon Woodstock, Challenger is also trained by Ajmal ‘Hudge’ Butt and hopes to follow in his gym mate’s footsteps as Leicester’s next Champion.

“I’m delighted to have signed a promotional deal with Frank Warren,” said Challenger. “This is a massive opportunity for me and I’m going to grab it with both hands. I’m really excited for the future and I’m looking forward to showing what I can bring to the table.

“Boxing in Leicester is on the up and I want to be leading the way alongside Lyon. I love my city and I want to repay the support the people of Leicester have shown me by winning titles for them.

“I’m slick, sharp and clinical. I’m extremely confident in my abilities and can mix it. As you saw against Danny Little I possess that one punch power, I also have bags of grit, heart and determination.

“The chemistry between myself, Lyon, Hudge and everyone else at the Leicester Unity is something that you can’t buy. Outside of boxing we are all close friends and support each other in all aspects of our lives.

“I just want to keep progressing and take each step as it comes. I want to be someone to look up to for the youth of Leicester. Hopefully when I get to the top I’ll be someone that younger people can aspire to be like.”

“CJ is another exciting young addition to our growing stable of talent,” said Promoter Frank Warren. “Ajmal Butt has done a fantastic job so far with Lyon and I’m looking forward to watching CJ develop and improve under him as well.”

Challenger is next out at the King Power Stadium in Leicester on March 2nd.