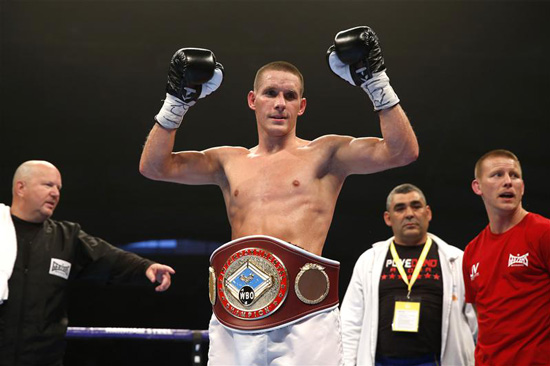 Undefeated Walsh has been involved in nine championship contests in his 19 professional fights with his first coming in his 10th bout with just three weeks’ notice. The Rochdale-born puncher can cut it with the best at both Super-Featherweight and Lightweight, having won British, Commonwealth and International Super-Featherweight titles and the WBO European Lightweight title.

The slick southpaw is determined to get a shot at the winner of tonight’s North West blockbuster and says he has what it takes to become a WBO World Lightweight champion. Walsh was forced to reluctantly pull out of his world title clash with Ricky Burns back in December 2012 after suffering significant injuries in a car accident during the build-up to the fight. Four years down the line the determined Walsh is now licking his lips at the prospect of another all-British blockbuster fight.

“This is 100% the fight that I’m after. When I fought as chief support in Manchester for Terry’s fight against Jose Zepeda I was under the impression that as long as we both won it was a given that we’d get it on. He was then forced to fight Diego Magdaleno as a mandatory and a fight between us wasn’t possible. I understand the politics of the sport but it was disappointing,” said Walsh.

He added: “For me Flanagan is one of the best, if not the, best Lightweights in the world. It’s an exciting fight and I’d get good props for taking him on. People would class me as an underdog in the fight which I’ve never been and I’d like to be.”

The history-making twin has always wanted to compete as a massive underdog in a hype-fuelled dust-up for world honours. Hot-shot Walsh, 29, is backing Flanagan to successfully defend his title in tonight’s barn burner and says he’d have no problems taking ‘Turbo’ on in his hometown of Manchester.

He said:  “It would probably be an away test up in Manchester which I’m happy with. I’m from Rochdale myself and it wouldn’t feel too far away from home. No doubt I’d have tonnes come from Rochdale to support me and I’d obviously have the Farmy Army turn out in their hundreds like they always do so it wouldn’t really feel like an away test,”

“It’s a fight I want because Flanagan is one of the best and I want to fight the best. It doesn’t look like there’s much floating around in the Super-Featherweight division at the moment. The opportunities look limited at the minute and I can hold my own at Super-Featherweight or Lightweight so it’s a fight that makes sense.”

Mancunian Lightweight king Flanagan marches into the lion’s den tonight to defend his world title for the second time against Merseyside hero Mathews, who will be looking to make history in his 50thprofessional fight. Whilst Walsh holds both men in high regard, he is confident that he would come out on top should he face the winner.

He said: “I know can beat the two men who are fighting tonight but I’ve got to show respect to them. I hope they have a really good fight, it’s a massive British world title fight and I wish them both the best. Personally I think Terry will win and probably look good doing it. Hopefully I get the opportunity to fight the winner. I’ve got ultimate respect for both fighters and I’d love to fight the winner. Just let me know as soon as possible and it’s on!”