LIAM WILLIAMS: “I MORE THAN HELD MY OWN WITH EVERYONE I SPARRED IN VEGAS.” 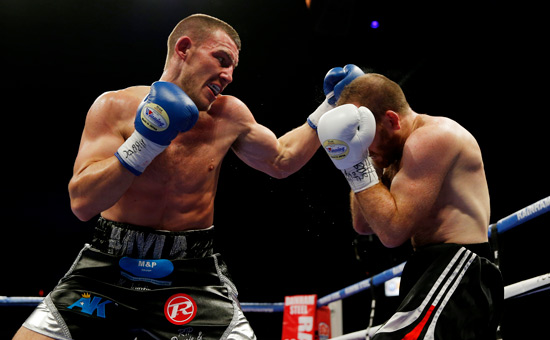 Unbeaten British Super-Welter boss Liam Williams is back on Welsh soil and itching to rumble after a highly productive two week tutorial in the unforgiving fight gyms of Las Vegas, writes Glynn Evans.

The bull strong, bionic punching rumbler from the Rhondda meets Liverpool’s Liam ‘Beefy’ Smith at the Manchester Arena on April 8th and insists that his US excursion has placed him into the best form and condition of his five and a half year pro career.

Here, in his own words, he recounts the experience:

‘I went to Vegas for a full two weeks and sparred at three gyms; Skipper Kelp’s Fight Capital Gym, the (Ismael) Salas Boxing Academy and the Mayweather Gym. Unfortunately Floyd Jr wasn’t there; he’d probably got wind I was coming for him (laughs)!

‘We sparred Monday, Wednesday and Friday both weeks and got in some great work with (Cuba’s) Yordenis Ugas, a former world amateur champion and Olympic bronze medallist, plus a (9-0 middleweight) Quatavious Cash and a few of Mayweather’s super-middles. They all came to have a ‘go’.

‘It was a pretty hostile environment to be honest –especially at the Salas’ gym where you had loads of Cubans hanging over the ring ropes – but let’s just say I acquitted myself well, more than held my own with everyone I sparred.

‘When we first arrived, all the Yanks were a bit stand-offish but they warmed to us once they could see we meant business. When I popped into the Top Rank Gym, Derrick Harmon, an ex pro who’d beaten Glen Johnson and boxed Roy Jones, asked if I was ‘Liam from the UK’ because they’d heard on the grapevine good things about what I was doing in the other Vegas gyms. Word had got around.

‘The main purpose of the trip wasn’t really the sparring but to keep myself fresh mentally. I’ve been in training for quite a while and sometimes at Gary’s in Cardiff it could get a bit monotonous and repetitive.

‘We certainly didn’t go for a holiday – I worked my balls off – but it was great to be away from the distractions you get at home. I got to see The Strip and one night had a good feast at ‘Hooters’, as a treat. I stayed at a fabulous time share apartment with a big pool and spa so I could just lounge around the pool between training sessions. Very relaxing.

‘The weather was boiling – too hot to handle – and we were able to work outside. I ran up the steps in Majestic Park and did some tough runs up Red Rock Mountain. This camp I’ll certainly not have to worry about weight.

‘The all round Vegas experience – training alongside so many top pros and experienced coaches – has definitely made me a better all round fighter. Holding my own in different gyms in a different country really bolstered my confidence.

‘I’ll have two more weeks in Cardiff – lots of hard gym and track sessions – then we’ll wind down fight week. I’ve three more spars scheduled but once I feel ‘perfect’ I just stop, regardless of how far out the fight is. Nothing is set in stone.

‘Saturday 8th April is the toughest fight of my life, biggest occasion of my career and I’m really enjoying the moment, taking everything in my stride, sucking up the experience and atmosphere. I know there’s going to be many more even bigger and tougher fights ahead of me after I’ve dealt with Smith.’