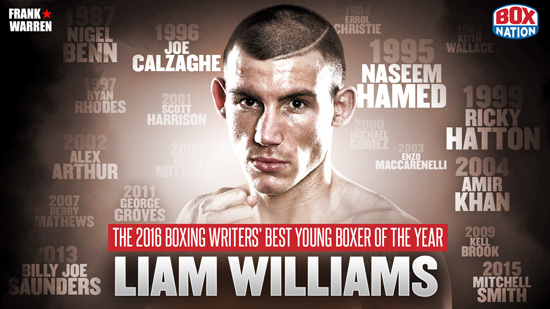 Clydach Vale Super-Welterweight star Liam Williams has been named the 2016 Best Young Boxer of the Year by the prestigious Boxing Writers’ Club.

Dynamite-punching Williams, 24, is fast establishing himself as one of the best young talents coming through the domestic scene with an explosive unbeaten record of 15 fights and ten knockouts and has so far claimed the Commonwealth and British Super-Welterweight titles, both televised on The Channel of Champions, BoxNation.

His last five fights have ended in brutal back-to-back knockout wins and he stopped Wembley’s Gary Corcoran in the eleventh round to retain his British belt at the Cardiff Ice Arena in July.

Ranked at number three in the world by the WBO, Williams is moving up the rankings fast and next fights at Cardiff’s Motorpoint Arena on Saturday 22nd October when he faces undefeated rival Ahmet Patterson in the second defence of his British title.

“I’m absolutely delighted to have been honoured with this award,” said Williams. “The fact that so many knowledgeable boxing writers, who have the whole of the country to choose from, have chosen me, it means a lot to me. Also, to have my name on a trophy alongside so many great fighters such as Ricky Hatton and Joe Calzaghe makes me very proud. It is an exciting time to be involved in Welsh boxing, there is a lot of positivity around at the moment which is helping me in my preparation for my British title defence against Ahmet Patterson.”

Trainer Gary Lockett said: “I’m delighted that Liam has won the prestigious Boxing Writers’ Young Boxer of the Year award. He has certainly worked hard enough for it. Liam has come through some dark times to take his place on the list of many world class fighters that have won this famous award previously and I am extremely proud of him.”

Frank Warren is delighted with Williams’ rapid progress. Williams becomes the 20th boxer promoted by the Hall of Famer Promoter to win the award.

“I’m thrilled that Liam has been awarded the Boxing Writers’ Young Boxer of the Year of the award and he deserves it for all the hard work he has put in over the past twelve months. In Liam we have a star in the making on our hands. He is an incredibly popular individual and his appeal comes from being a brutal banger who can also box a bit. He punches like Colin Jones, has an engine and determination like Joe Calzaghe. I believe he will emulate them, Enzo Maccarinelli and Steve Robinson in going all the way, he certainly has the attitude and tools to do it,” said Warren.

Welsh hero Williams will be presented his award at the iconic ceremony on Monday 10th October at the Savoy Hotel.