LIAM WILLIAMS: “ONCE WE START LANDING IT IS GOING TO OPEN UP INTO THE VERY EXCITING FIGHT”

THE BIG INTERVIEW
Round 3
By Richard Hubbard 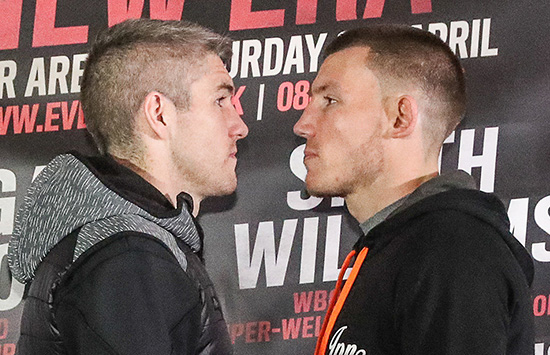 Fight fans with a taste for the no holds barred approach, where the combatants meet in the middle with no quarter given, will have been licking their lips at the prospect of Liam Williams and Liam Smith getting it on in Manchester on Saturday.

Even Frank Warren quipped that this is one he could put on a phone box.

For his part, Williams hints it might be more to the liking of the purists than many people imagine. For a little while, at least.

Those expecting bombs away from the first bell may have a bit more time than they think to shuffle towards the edge of their seats.

It will explode, Williams insists, but the fireworks could be preceded by some tactical probing.

“Yeah because everybody thinks it is going to be this crazy, all-out war, which it will quite possibly develop into,” said the 24-year-old holder of the British super welterweight title.

“But neither of us is gonna want to give too much away early doors, so it could be a little bit cagey. I am not saying it definitely will be, but it could be like that.

“Once we start landing it is going to open up into a very exciting fight.”

Surely this one can’t fail to be a classic encounter?

“No, from my point of view, I am ready for action – unless he wants to come and make it a dull fight, it is not going to be.”

The power possessed by Williams, to the mind of his coach Gary Lockett, probably catches the untrained eye to a greater extent than his other considerable attributes.

Lockett doesn’t want his man simply entering into a shootout which, by Williams‘ own admission, he has recently been guilty of.

“More skill and control really, which I haven’t shown in my last two fights (against Gary Corcoran and Gabor Gorbics). I think that has been more down to a lack of respect for my opponent as deep down I never really believed they could beat me.

“It is not the best attitude to have, I know, but sometimes it is hard to get motivated for fights you are sure you are going to win – even if you are at 70 per cent.

Williams views his fight with Smith for the WBO Interim world title as the ideal platform to showcase his full repertoire of boxing tricks, while also proving, once and for all, he is not just a banger.

“One hundred per cent, yes. I think it is going to make people sit on the edge of their seats and think ‘bloody hell, I didn’t expect this – he can box, he can fight, he can punch’.

“With good foot movements, feints – just a little bit of everything. It is going to be good.”

The perception of Williams as a snarling knockout merchant, he readily acknowledges, was created during his brutal toppling of Corcoran.

The two of them went at it from the off like a couple of alcohol-fuelled scrappers having a tear-up outside a high street boozer.

“Yes, definitely. From the outside I would’ve thought nothing else but that either. When I watch my own performance back I looked like a mad man who just wanted his blood.

“It was nasty and it wasn’t the right way to approach a fight. Although I won and it was a good win, that was probably a fight where I only showed 50 per cent of the skill I actually have in the locker.

“I am a lot better than that. I was just trying to hurt him with every punch, I wasn’t setting anything up, it was just head on and wasn’t good.

Indeed it was, but Williams knows control is key if he is to have the last laugh again on Saturday.

Next time: Williams on why the Manchester Arena will be a home from home for him this weekend