Liam Williams: “When it comes to the crunch, it is me and him in the ring and, believe me, I am ready to go.” 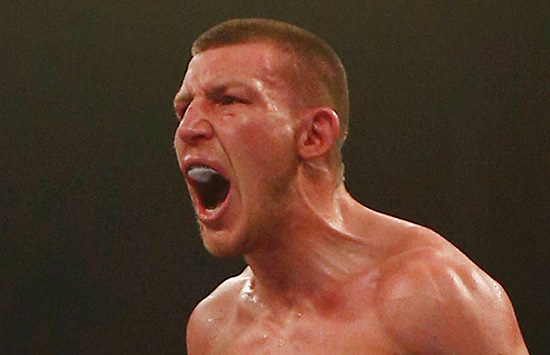 Both Liam Williams, and the man who will emerge from the opposite corner next Saturday night in Manchester, Liam Smith, are fearsome warriors of the ring. Not only fearsome, but fearless too, which is why Williams has been a little taken aback by the narrative Smith has attempted to set down for this much-anticipated encounter.

In his media activity up to now, Smith has opted to attempt to portray Williams as a fighter more comfortable hiding behind the coattails of his respected trainer Gary Lockett, that the former WBU title holder pulls his strings and the 24-year-old cannot function without him.

As big fight themes go, it is certainly original and, such is the nature of the beast, is generally cooked up in an attempt to get a bite from the irritated recipient of the bait.

Williams refuses to be publicly reeled in by his opponent’s pre-fight fishing and can’t really fathom where Smith is coming from in his bid to unhinge him before the first blows are traded for real.

“To be honest with you, I don’t think it has come from anywhere, I think he has just made it up trying to get under my skin,” responded the British super welterweight champion on his supposed inability to communicate effectively without his training mentor. “All I think he has seen is that me and Gary have obviously got a very good relationship, but that is all he could’ve seen, and he is just trying to piss me off really.

“It is not working,” he emphatically added.

Those who know or have spent time with Williams will vouch for him being friendly and engaging company. His public persona isn’t quite so effervescent, because he admits he can come across as not hugely approachable and a man of not too many words when going about his boxing business.

The way he brutally unravels the defences of his opponents doesn’t mark him out as being the cuddly type or one who would be anyone’s puppet.

“I understand that and can see where you are coming from. I just don’t know where he has got it from and I was as shocked as anybody else was when he come out with it. To be honest, it is just a load of bullshit.

“But I just thought ‘keep believing what you want’ because, when it comes to the crunch, it is me and him in the ring and, believe me, I am ready to go.

“Gary doesn’t really matter, obviously he has got to give me sound advice and a little bit of guidance, but Gary can’t help me when I’m in there and I am ready to go on my own, believe me.”

Smith’s carefully measured digs, in an interview with BoxNation, included the claim that Williams would be wary of being alone in the same room with him.

Again, the riposte of the Welshman was swift and to the point.

“Oh, f**king joke. Again, I don’t know what has given him that impression but, if it was me and him in a room, at the end of the day, lock the door on us and I would be the only one coming out of there.

“I am not in the slightest bit intimidated by him. That is just something he’s made up to try and make me snap. I am not scared and he is just trying to make me pipe up really.”

Williams knows full well why Smith suspects he can be knocked out of his fighting stride.

Before his British title defence against the unbeaten Gary Corcoran in July of last year he allowed the Wembley man to really rattle his cage. When the fight was announced, Corcoran immediately took to social media to dish out some personal insults and Williams quickly responded in kind. 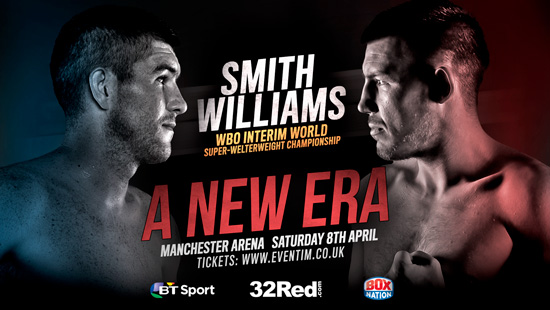 There were no niceties at the press conference either and the pair were soon butting heads during the photocall.

The hostilities led to Williams losing his cool and, although the threat of Corcoran was accounted for, he admits he was off his game and failed to play to his own strengths due to the despise of the man in front of him.

The Clydach Vale favourite is steadfast in his determination not to allow Smith to repeat the trick but, it seems, it will not be for the want of trying.

“He is, 100 per cent, trying to pull strings to get me to bite, but it is just pathetic and I have learned from my mistakes. What I am going to get out of having a screaming and shouting match? All it would do is wind myself up when, in reality, other than in the ring nothing else is going to happen anyway.

“I will just keep my energy for the ring.

“Corcoran got a bit personal and stuff and I just felt there was no need for it. To be honest, it was also a clash of personalities – even if he didn’t say anything about me I wouldn’t have liked him anyway.

“I don’t think we were ever going to get on.”

Maintaining his composure, Williams suspects, could well end up frustrating the fisherman.

“Yeah probably, I think he will end up winding himself up because he is trying to get a bite and he’s not getting it. In the end he will probably think ‘f**k me, I thought it was going to be easier than this’.

“He is just going to find himself lost then, once he actually loses the fight, I don’t know what he is going to do. He is going to be suicidal I think.”

In meetings so far between the pair, Williams has opted for a calm and respectful approach in the exchanges, in much the same way as Smith did when he entered into his own breakout fight against Canelo.

“Smith was respectful, basically because he knew what was coming to him,” suggested Williams, who thinks there is a bit of the playground about the approach this time around. “He appears to me to be the bullying type who always wants to be in the driving seat. Joe Gallagher said I was a control freak but, when I was reading the interview, what he said about me appeared to be more the case for Liam Smith.

“As soon as somebody stands up to them, they soon back down.”

Next time: Williams on his Vegas voyage and why no credit is due for stepping in with Smith