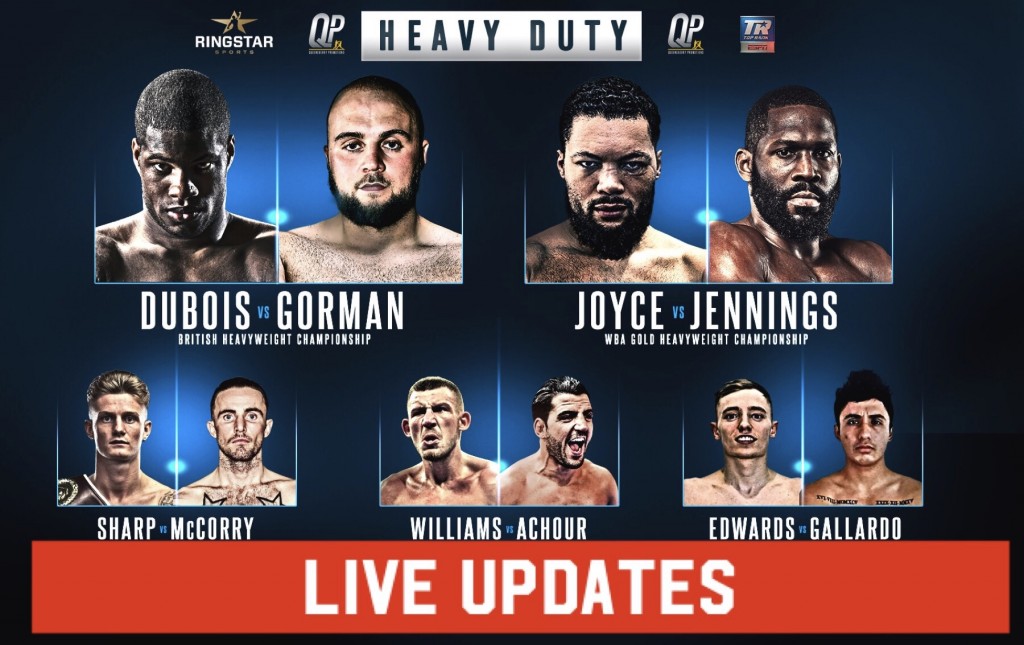 Fight results and brief summaries from the ‘Heavy Duty’ card at the o2 Arena topped by the showdown for the vacant British Heavyweight Championship. Richard Hubbard reports from ringside

It was a cagey, tension-filled start to this long-awaited showdown with Dubois the more eager to dictate proceedings, with Gorman quick on the counter. There were some brutal exchanges in the second, where Gorman sustained a cut around the eye. Dubois stepped up the spite in the third and put Gorman to the canvas and a huge swing-off ensued. You got the impression that Gorman was playing to the strengths of Dubois, rather than his own. Aside from a sweet left hook, Dubois remained in charge in round four. A huge right hand ended matters in the fifth. Dubois is the new British heavyweight champion.

Joyce employed his customary tactic of attempting to submerge his opponent with a whirlwind of shots, which he did, but danger signals were there early from the American, who appeared to hurt the Englishman to the body and also upstairs towards the end of the first round. Both were trading in hurt during the second and both appeared to have a very high pain threshold when it comes to shots that rock the head. Joyce was certainly the busier in the third before a frantic ending to the round that saw bombs flying to and fro. The incredible exchanges flowed in the fourth, with clean punches finding a way through on a regular basis. It was a wonder how this pair managed to stay upright. The fifth, inevitably, slowed up a little, before the next two saw Joyce stay on the front foot. Jennings started to rally in the eighth, landing a number of clubbing blows. The next three minutes was closely fought and hard to call as blows were dispatched and returned to sender. Brutality from Jennings seemed to draw out the beast in Joyce when apparently hurt. Jennings was deducted a point for a low blow in the tenth and Joyce seemed to find yet another wind for the final round of a fight he will take so much from.

Wiliams largely bossed the first but Achour, not stopped before, did not allow himself to be bullied and kept the three minutes devoid of decisive action. Some big rights blasted through the guard in the second, before a right and then a left put Achour down, where he found himself again moments later and it was all over. The Machine was in mean mode again.

It was Sharp trying to force the action, contrary to predictions of the Scot being the principal aggressor. The Welling man did catch a big right hand on his way in early on and there were a couple of wildly misplaced warning shots, but otherwise the Sharp Shooter was finding his range and getting his eye in. A right hand and a flurry of follow up shots troubled McCorry in the second. McCorry sunk in the fourth when Sharp buried a left hook into his middle and the count reached eight before he was allowed to continue when it looked at one point like he might not get up. Sharp was dominating the exchanges despite a more bullish approach from McCorry, who was by the mid rounds very much the bull to the matador. Sharp showed he is prepared to mix it when the situation calls for a trade-off. It was an absorbing scrap that McCorry was playing a big part in, but whether he was also winning rounds was debatable. That the fight went the full ten rounds was the bonus for the viewers.

Showtime Sunny put on the style right from the first bell, picking his shots and counters with precision, but it quickly became clear he was up against a tough and well conditioned opponent who was not over from Mexico on a London city break. Gallardo touched down in the second and was given a count, but it was not clear how much of his fall was caused by a punch. He earlier absorbed a vicious right hook from Edwards almost without flinching, so the home man was going to have to produce something big in order to get an early night. Edwards wasn’t able to exhibit his usual snappy fluency as Gallardo was successfully drawing him into a scrap as we headed into the fifth. Edwards then got his feet moving again and was picking his shots and stepping away from danger. It was a round where Edwards re-established control. It was fight time again in the sixth with Edwards again allowing Gallardo up closer to exchange, but the confident Croydon man did land a couple of huge hooks. A tasty left hook stunned Gallardo in the ninth as the fight followed the familiar pattern of Edwards picking off his game opponent and staying out of trouble.

The 18-year-old star in the making opted for a slightly more calculated approach then he did on debut in May, but still picked his shots in a spiteful fashion Larios bravely attempted to create the illusion that the punishment he was shipping was having minimal effect and he appeared to dislike the brash bravado of young McCann. There was some stunning shot selection from McCann in the third and he was enjoying his extended time strutting the canvas. The pair exchanged stares at the end of the round and McCann now has a full four under his belt.

The highly-rated and unbeaten Scot was the dominant force right from the off against the 26-year-old from Split, Croatia. The 20-year-old former amateur world champion was patient in his work and didn’t go gung-ho in attempting to break down the capable Perkovic. Hutchinson was letting fly with devilish digs to the body, an investment designed no doubt to cash in and pay dividends later in the fight. Hutchinson upped the tempo in the third as he hunted down his prey, who was offering little in return. A sustained attack had Perkovic wobbling in the fourth and he subsequently remained in retreat, but saw out the round. The same pattern continued right to the end and Hutchinson clocked up win number nine.

The Albanian former MMA superstar came charging out like a raging bull from the first bell, launching crude swings in the direction of his opponent from Leeds, who seemed happy to taunt the 3-0 man and his throng of supporters. It was a mad turn of events, with Broadbent sticking out his chin and putting his hands behind his back as Marku attempted to behead him. At times there was more talking than punching going on. The odd thudding shot was landing as Marku not so much stalked but chased down Broadbent, who appeared to be tiring towards the end of the third. A shot to the body ended the defiance of Broadbent in the fourth round. It was boxing, but not as we know it.

In the first heavyweight action of the evening, Palata quickly moved to 6-0 after chopping to the body of his Hungarian opponent and ripening him up for a fall, which came soon enough and, when Palata repeated the trick, referee Chaz Coakley deemed that Zsalek should suffer no more.

Making his debut, Burke, commonly known as Ginge, was straight on the case of his Leicestershire opponent, firing in telling jabs and penetrating the high guard put up in front of him. The rounds followed a similar pattern with Burke being on the offensive, but he did soak up a shot or two in the third as Williams countered. All in all an a debut the Burke jr can be more than happy with.

After boxing smartly behind his jab for all of 20 seconds, Da Bomb reverted to type and unleashed a barrage of shots on his well seasoned opponent. Gonzalez was twice felled by left hooks in the opening round and looked on the verge of stoppage, but just about made it to the bell. The second saw more of the same only with Gonzalez staying on his feet and a whole new experience for Chamberlain, who had previously not been extended beyond the first. The relentless assault continued throughout the third and fourth with the remarkable fact being the survival of Gonzalez.

The familiar face of the Spain-based Nicaraguan was drafted in to provide a sixth test for Erith youngster Pettitt, who was finding the target at will in the opening moments with speedy combinations. Guillen, with 67 fights on his clock, was offering minimal return fire and was becoming target practice for the product of the iBox Gym in Bromley, who was impressive in his work. A left hook caught Guillen flush in the third, dropping him to the canvas before Pettitt embarked on open season to the defences of his opponent. Guillen admirably survived the round on sometimes unsteady legs. The one-way traffic – bar the odd wild swing – continued through the fourth to an emphatic conclusion. The Pacman moves to 6-0.