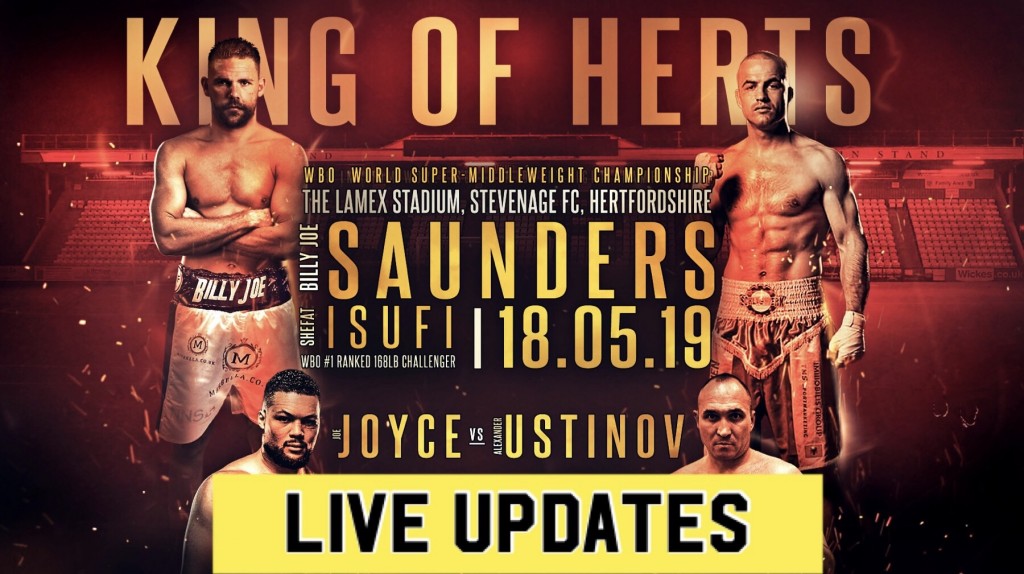 Congratulations to Billy Joe Saunders, who defeated Shefat Isufi to win the vacant WBO World Super Middleweight Championship and become a two-weight world champion at the Lamex Stadium, home of Stevenage FC. Below are the results and brief reports from the main event and undercard fights from Richard Hubbard at ringside

Southpaw slickster Saunders was quickly out of the blocks firing in rapier like jabs into the face of Isufi, who had no answers to the movement and range of shots he was being forced to absorb. Saunders looked a class above and Isufi a little befuddled by what was in front of him.

Saunders’ Hertfordshire army were creating quite some atmosphere inside the Lamex Stadium as their man was executing something of a masterclass to which Isufi was offering little in return. Isufi’s expression at the end of round two told of him being utterly perplexed over how to counter the array of shots and nifty movement of the former middleweight world champion.

Saunders unleashed a flurry of shots in the third that resulted in referee Marcus McDonnell taking a close look at the wellbeing of Isufi but, to his credit, the Albanian fired back and kept the referee off his case for the time being.

The memorising display of Saunders continued through the fourth and Isufi carried on being perplexed by the variety of shots coming in his direction. Isufi was regularly cornered and his only riposte came via wild and hopeful haymakers.

The beginning of the sixth saw Saunders clubbed back towards the ropes by a huge right hand and, for once, the Hatfield man was holding on and subsequently got on his toes and kept out of trouble. It was a warning sign not to take his man too lightly, however much he was on top.

Isufi was showing a new resolve after being flummoxed for six rounds and it was he who was on the prowl stalking his prey. Saunders launched some stunning manoeuvres off the back foot at the end of the seventh.

The 27-0 man went back on the hunt at the start of the eighth and was completely dominant across the full three minutes as Isufi went back into his shell, with the ninth and tenth following a similar pattern.

Isufi was attempting to land bombs but was not finding the target with single shots as Saunders was cruising towards a second world title and was not taking any chances.

He got on his bike in the final round, circling the Albanian and not putting his fine work at risk.

A slightly untidy first round unfolded as the more mobile Joyce bobbed and weaved around the upright Ustinov. The showreel punch was a clubbing overhand right dispatched by Joyce in the final moments of the round. Joyce proceeded to cut loose in the second and winged in a succession of hooks that had the Belorussian rocking and looking ill at ease in his Stevenage surroundings. A looping left had Ustinov looking bewildered and beaten at the end of the second. A swinging right saw Ustinov counted out by referee Victor Loughlin in the third. Joyce moves to 9-0.

The unbeaten Hutch Train started like an express train against his Czech opponent, firing jolting jabs to head and body and forcing Budera onto the defensive. Budera showed a bit more ambition in the second but had his head rocked back by a fierce right hander from Hutchinson, who continued to snap in his punches in the third. Another right rocked Budera back on his heels and the subsequent flurry floored him, then again moments later before Kieran McCann spared him further punishment. Hutchinson moves to 8-0.

Foster, the former kickboxing world champion, was winning the first round on industry alone before he put a seal on a 10-8 margin with a chopping right hook to the side of the head that put the Commonwealth champion to the canvas. Foster was working impressively to the body in the second as Lane struggled to establish a foothold in the fight. The Lichfield 21-year-old continue to dispatch venomous shots into the third and rocked Lane again inside the first minute. It was pretty much a one-way assault as Foster maintained his high tempo. Lane stepped up the pace into the fourth but was still shipping punishment towards the end. The fifth and sixth evened up a bit but without any telling shots being landed by either man. Foster picked up the pressure again in the seventh with some heavy shots to both head and body as Lane started to look vulnerable, but this tough man kept returning fire and showed no signs of surrender. The ninth was then a tighter affair as Foster appeared to step off the gas, perhaps sensing this one would go all the way. Ten and eleven were close rounds, but Foster always being the one attempting to press the action. It was Lane who came out firing in the last, knowing he had a deficit to make up. He went down to a low blow and took his time to recover, but was then felled with a huge right and Foster quickly afterwards forced the stoppage.

Dennis ‘The Menace’ made a spectacular entry into the pro ranks with a speedy demolition of his Polish opponent. The 18-year-old was set o destruction right from the first bell and after flooring his opponent for the second time with a viscous southpaw left, referee Mr Every sensibly saved Jaworek from further punishment.

The opening salvos were of the nip and tuck variety with neither man establishing clear superiority, although Cooper landed clean in the third while taking some return fire from the popular Jones. The Chingford charmer, working off his jab, was targeting the body of Cooper, but the Willenhall battler kept up with his own pressure and the balance of power was a tricky one to call. Cooper caught Jones with a combination in the ninth. Jones appeared the more confident of being declared the winner, but the judges scored it a majority victory for the now 9-0 Cooper.

The 6-0 Harley Benn established an upper hand in the first round, mostly through being the aggressor, but Hallett from Canning Town with popular journeyman Johnny Greaves in his corner was enjoying success in spurts and had Benn hanging on at times in the second. The long right hand looked like being the money punch for Benn, but Hallett was undeterred and a huge left rocked the head of his adversary right at the end of the third. Benn spent the following round mostly in retreat as Hallett piled on the pressure right to the end. The referee’s scorecard of 39-37 in favour of Hallett represented a first win as a professional for Hallett, who previously held a record of 0-16.

Southpaw Horn was jolting out the jab with telling effect from the first bell as his Nicaraguan opponent strived to divert as much as possible onto his high guard. A right hook to the body was the most effective shot right on the bell to signal the end of a one-sided round. Sanchez managed to buck a growing trend in round three by giving Horn something to think about, but the sharp punches of the Chigwell man always kept him in the ascendancy. Horn continued to peck away at the defences of Sanchez as the minutes ticked by towards a convincing win that takes him to 6-0 as a pro.

Branch dominated the early exchanges, frequently flicking out his southpaw jab and then working to the body of the slightly fleshy Czech, who was not offering much back in return. A first stoppage win for the Peacock Gym-trained product came after 2.04 of round two with a body shot that Hrazdiri showed little appetite for recovering from.

A ferocious first round saw the Commonwealth Games gold medallist on her pro debut buzz her Staffordshire opponent with a big right that appeared to leave Hodges on the brink of being stopped, particularly with Whiteside feverishly working the head and body in snappy combinations. Hodges managed to regroup and take the fight to the final bell, but it was a clear first win for the Chorley girl.

The unbeaten Hungarian extended his record to 10-0 with a convincing victory over the durable Nicaraguan Solis with the exchanges, while one-sided, not completely dominant until the seventh round when Bacskai twice put Solis to the canvas and looked to force a stoppage. Solis, who has a decent winning record, survived the onslaught and made it through to the end. It was, however, a landslide points defeat on the cards.

The two opening contests both went the four-round distance and were won by a margin of 40-36, with Connor Wright moving to 8-0 with victory over Owen Jobburn, while Graham Tirrell defeated Scott Hill man.