Has there ever been a better-looking boxer than Oscar De La Hoya? In the eye-candy sense, that is?

Some of the best news coming out of 2015 was the declaration by boxing’s original Golden Boy that he had shelved the idea of making a ring comeback at 42, an ill-advised move that surely would have put those enduring Latino good looks severely at risk.

Instead he is concentrating on making another, less potentially damaging comeback (physically if not fiscally) as a promoter.

Removed from the grip of alcoholism and an acrimonious split with Richard Schaefer, the longtime chief executive of De La Hoya’s Golden Boy Promotions, the former six-division world-champion is back in full control of his boxing empire. 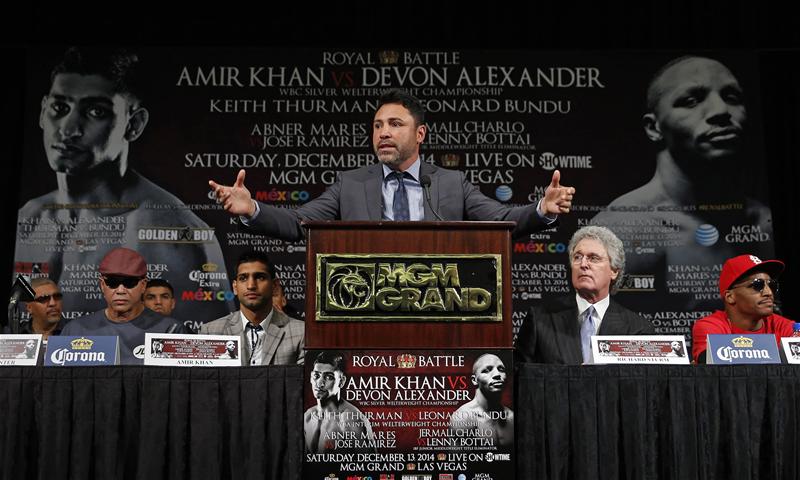 Many in the business doubted he could do so after coming close to wrecking his life, his image and his reputation. But a re-invigorated De La Hoya has already staged one of the best fights of the year, a victory by his junior-welterweight fighter Lucas Matthysse over Ruslan Provodnikov in April.

And Golden Boy is set for other major promotions, this year, including the surefire classic fist-fest between De La Hoya’s IBF middleweight champion David Lemieux and the undefeated WBA title holder Gennady Golovkin, at Madison Square Garden on October 17 which has been snapped up by BoxNation for live British viewing. 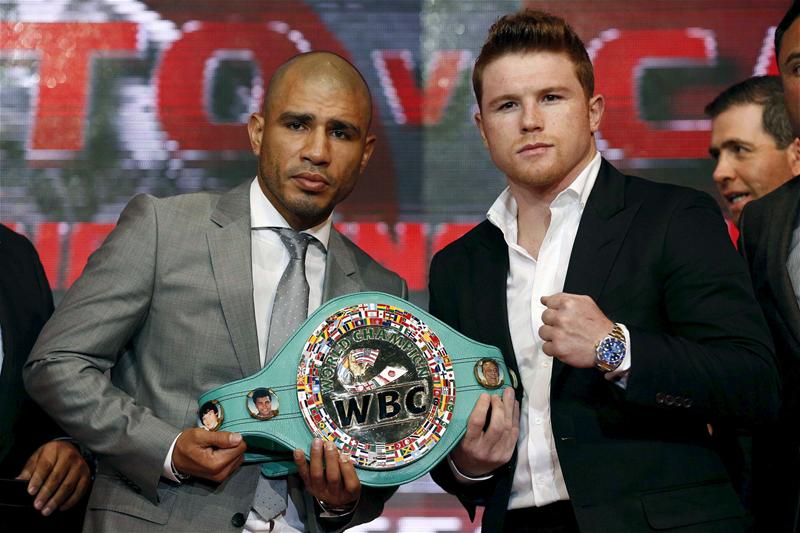 “I have found it in me again,” he told the Los Angeles Times last week. “I cleared my head. It’s like I’ve taken the whole car apart to put it back together again.”

In his heyday De La Hoya was hailed by US presidents for his clean-cut, iconic image and worshipped by his millions of fans. But four years ago he rocked the boxing world by confessing to being an alcoholic and drug addict who dressed in drag and cheated regularly on his wife, mother of two of his five children.

After spending the several months in rehab in a Californian clinic, the Mexican-American idol subsequently stepped back into the spotlight to speak openly of his battle outside the ring that drove him to the brink of suicide.

What made his confessional so astounding was that here was no archetypal washed-up stumblebum, with which the fight game is sometimes sadly familiar, but a handsome, articulate multi-millionaire boxer-businessman who converted Olympic gold in Barcelona in 1992 to two fistfuls of world titles in six different weight divisions in a 16-year, 45-fight career. He retired after the stoppage loss to Pacquiao in December 2008.

Ali apart, De La Hoya has been the most revered figure in US boxing during the past half-century. As head of Golden Boy he promoted scores of top fighters, including Britons Ricky Hatton, David Haye and Amir Khan.

Little could Hatton have known that when he was battling the booze himself, so was his promoter. While Khan reflects: “We never guessed a thing. Oscar always presented himself as such a sober figure.”

Yet De La Hoya’s confessional included the stunning admission that “I haven’t been truly sober since I was eight.” He said he was encouraged to sip beer at family parties. “A sip sounds harmless, but after about 20 you are drunk. I remember the first time when I passed out. My mother whacked me pretty good.”

Before he entered the Betty Ford clinic in Malibu, De La Hoya revealed had fought the influence of alcohol throughout his career. “It was a monster so big I cannot describe it. I’m surprised it hasn’t killed me,” he said, adding: “There were drugs. My drug of choice was cocaine. The last two years I depended more on the alcohol than the cocaine. It took me to a place where I felt safe.”

He also admitted to cross-dressing. When photos of him in fishnets appeared in a magazine four years ago he protested they were fake but later he revealed: “Yes, it was me. I am tired now of lying, of lying to the public and of lying to myself.”

Other pictures showed one of the most macho men in the United States in bras, short skirts and women’s underwear. “I was under the influence of alcohol and drugs. I got involved in some very bad things.”

Apart from the drugs and booze there were the women. “We are not talking a Tiger Woods here, but I was unfaithful. I’ve sought forgiveness. Millie [his second wife] is a very good person and it hurts me a lot. Those nights when I was drunk and on my own, I asked myself: ‘Is it really worth continuing to live?’ I contemplated suicide. I’m incapable of doing something like that, but I did think about it. 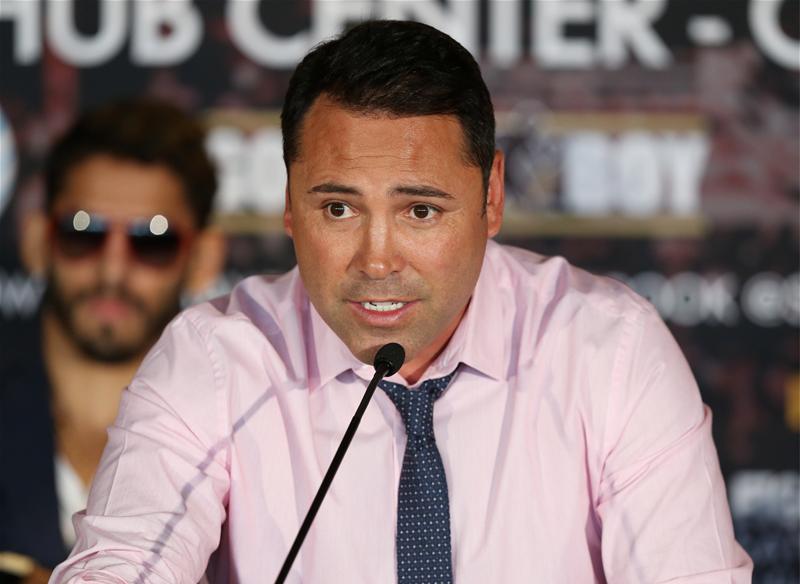 “At times I would even drink a tequila before a fight. In 2009 I overdosed on cocaine and alcohol and wound up hospitalised. I knew then I was going to end up dead or in jail.

“Now, I honestly feel as though I am born again. I feel better than ever. Addiction has been the hardest battle of my life. This is sort of like training for a fight that never comes.

“I am going back to those grungy gyms where I started my career to try and discover the next Oscar de La Hoya.”

He is also deep into another search, for permanent sobriety, after a second spell in rehab two years ago, and still attends pre-breakfast Alcoholic Anonymous sessions every morning.

He also talks of how, while overcoming his personal demons, he fought off offers, orchestrated he claims by estranged associate Schaefer, to buy Golden Boy.

Between them they had built up Golden Boy by promising better deals for boxers, giving some shares in the company.

But the partnership deteriorated amid De La Hoya’s unstable behaviour.

“But when I finally cleared my head, when I found myself, he knew it,” De La Hoya said. “I saw a change. He couldn’t look at me in the eyes, didn’t want to be around me. No, I could not lose Golden Boy. It is my baby.”

Looking ahead, De La Hoya insists he’ll work with any promoter (including Bob Arum with whom he has mended fences) other than Haymon’s Premier Boxing Champions.

Like Arum’s Top Rank, Golden Boy are suing Haymon in Federal court for $3 million, claiming he is violating the Muhammad Ali Act that forbids a manager from acting jointly as a promoter for his fighters.

But De La Hoya, as he always did when under pressure in the ring, is fighting back. He wants to extend his stable of young prospects, which include his undefeated Mexican cousin Diego De La Hoya (aka ‘The Golden Kid’ who the WBC Youth Super Bantamweight championship in his 12th fight on a BoxNation-televised card in LA at the weekend), Frankie Gomez and Julian Ramirez, along with San Antonio’s Hector Tanajara.

“I have an eye for talent. No other promoter in the world has laced up the gloves like I have,” says De La Hoya. “We built a lot of fighters. We can do it again. This time, I’m going to do it my way: Be smart and sign them all and be sure we’re on top of re-signing them.”

As a fighter, Hall of Famer De La Hoya defeated 17 world champions and was only himself ever beaten by the best: Floyd Mayweather Jnr (Oscar is the only opponent ever to have taken him to a split decision, one judge voting in his favour), Manny Pacquiao, Bernard Hopkins, Shane Mosley and Felix Trinidad.

He promises: “You can rest assured that I will spend the rest of my days around this wonderful sport, even though those days won’t be spent inside the ropes. I needed to rehabilitate my soul, my inside and search for who I really am. I got lost ever since I retired. It happens. And wow, I came back. I’m ready to go… I’m ready to go.” Handsomely put. Give that man an Oscar.