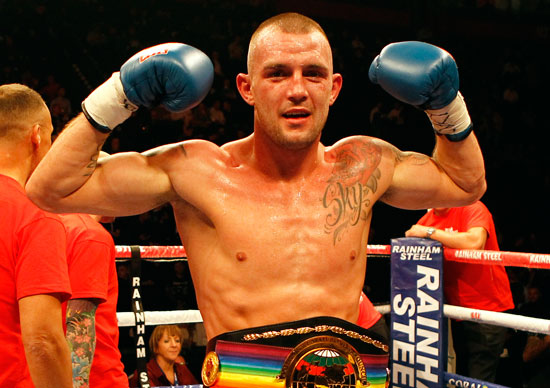 Ahead of the second defence of his Commonwealth title at Bolton this Friday, the 25 year old no nonsense northerner told Glynn Evans that he yearns for the blood of an Englishman!

You produced a quality display last time to tame rugged Grays hard case Lee Markham over 12 at the Manchester Arena. How did you assess your performance?

Pretty decent. I was actually ill in the run up and my team wanted to pull me out.
Lee’s awkward for anybody, hard to look good against. He stays on your chest and smothers. But our game plan worked perfectly, and I thought I looked good in bits. It was a hard fight – as was the one for the title with Liam Cameron – but I was only caught with one or two shots.

You’ve been dormant for seven months since. What have you been up to?

Don’t worry, I’ve been plenty busy. I sparred (ex WBO champ) Arthur Abraham in Germany for a month over Christmas and that went really well, he was easy to get on with. To be honest it were pretty even and at times I outworked him. He can be lazy.
Then five weeks ago I went to Spain – through the Sauerlands – to spar Tyron Zeuge and another unbeaten German kid. I was over there on my own which was a fresh experience. The sparring went really well.

Definitely. I’ve had a real good base to kick on to bigger titles. As you point out, I’ve had a lot of tough fights already. Matthew Barney was a real awkward bastard who I beat at a week’s notice and you can throw in my debatable loss to the (then 15-0) Swede Erik Skoglund in Denmark plus my first Commonwealth challenge to Rocky Fielding (lrsc1) to the names you mention.
But it’s all been good experience which is what I want.

The 168lb division you inhabit is one of the most densely talented in Britain. How do you assess your key rivals? Who would you most like to meet?

However, I’d say (IBF king James) DeGale is the best all round, a very slick southpaw with bags of confidence. He’s the one I’d love to face.  I honestly believe I could cause him a lot of problems with a good game plan and my high work rate. He’s very talented but a bit lazy. I’d love that opportunity but understand that I need to EARN it.

A showdown with unbeaten world rated WBO European king Jamie Cox would be easy to make, given he’s also on the QP roster. Would that interest you?

To be honest, I’d view that as a backward step. I want fights that’ll move me forwards. It’s the same with Vijender Singh. Both are very dangerous. But whereas Callum Smith is destroying top kids, Cox just knocks numpties out. They need to bring summat I want otherwise there would need to be very good money involved.

After this fight, the British title is ideally what I’ll go for. I’d love to get that Lonsdale Belt. I don’t mind fighting a final eliminator to merit my shot. Perhaps I could have a return against either Cameron or Markham. I’m not looking for a return with Rocky because we work from the same camp but if it made business sense of course it can happen.

Having shutout Philip Kotey over ten in 2014, you’re faced with another Ghanaian on Friday, when you square off with 45 fight veteran Ishmael Tetteh, aka ‘Black Roy Jones Jr’!
The fight was confirmed at short notice. What have you been able to find out about him?

I’ve seen very little other than his fight with Martin Murray when he retired on his stool after six rounds. But I’ve sparred 20 rounds with Martin myself for this fight and he told me Tetteh is very tough and durable. Martin’s given me a few pointers.
We’ve got a really good game plan and I fully expect to smash Tetteh’s head in on Friday night to force a big domestic fight. What I really want is 50-50 fights against the top British names. I was very disappointed when David Brophy pulled out to fight George Groves instead.

You enter as a prohibitive favourite with the bookies. What would represent a good night for Luke Blackledge on Friday?

The win is the most important thing obviously but I know I also need to look good if I’m to force the big domestic fights I crave. I live in Bolton now and I’ve probably knocked out about 200 tickets but it’d be far more for a big name domestic opponent.
Hopefully on Friday you’ll see the new stuff – the skills, footwork, head movement, general control – that I’ve been learning in the gym over the last seven months. You’ll see a big improvement, trust me.